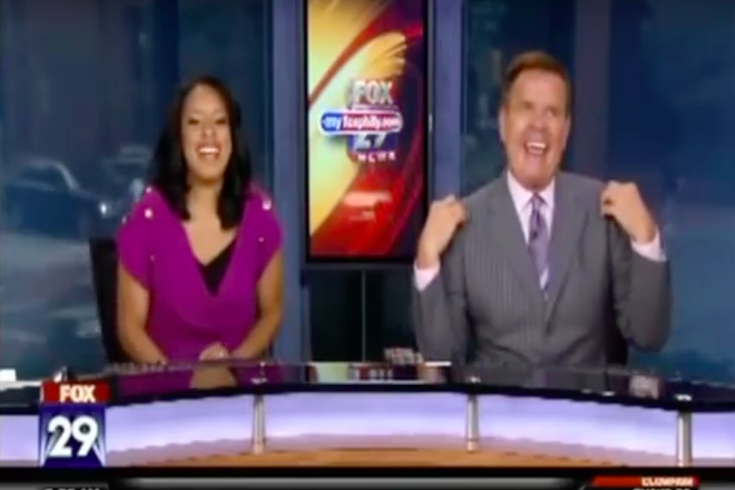 As beloved NBC10 meteorologist Sheena Parveen moves on from Philadelphia to Washington D.C., it's appropriate to take a step back and wonder why we care so much about our local television news anchors and personalities in the first place. Part of the reason may be because local television news in Philadelphia sometimes — not often, but often enough – produces the type of bizarre and hilarious moments that become the stuff of viral YouTube fame.

Here are five times that your local news broadcast went off the rails:

During a weather segment on 6ABC, Cecily Tynan handed things over to fellow meteorologist Adam Joseph. There was an issue with the mics, and Tynan's was still live. She appears to be heard calling Joseph a "moron." The station got so much feedback about it that Jim Gardner, always the composed one, took to the airwaves to say that Tyan didn't call Joseph a moron, saying Tynan was trying to ask if producers wanted her "mic on." Sure, Jim.

Nicole Brewer and Carol Erickson hate each other

In a series of segments on CBS3 in 2013, anchor Nicole Brewer and meteorologist Carol Erickson seemed to take several passive aggressive shots at each other, with Brewer mocking Erickson with fake claps and Erickson suggesting Brewer had been drinking before going on the air. The station eventually responded to the viral clip, saying it was edited out of context and adding that the two were friends. Erickson is no longer at the station.

Anytime Mike Jerrick interviews a celebrity that's not all there

Mike Jerrick, my personal hero, is the star of two viral interviews as co-host of FOX 29's "Good Day Philadelphia." There's the interview with swimmer Ryan Lochte, who was promoting a reality television show at the time. Jerrick and then-co-host Sheinelle Jones could barely hold it in while questioning Lochte in an interview that produced the now-famous quote, "I'm a man at night, and I'm a man in the morning."

And there's also the time Jerrick mocked the outfits and voices of Kim and Kourtney Kardashian.

Former CBS3 anchor Larry Mendte was anchoring from Lumberton, New Jersey, to cover some flooding. He fell into the water and broke his mic. Everybody laughed. Oh, what simpler times those were.