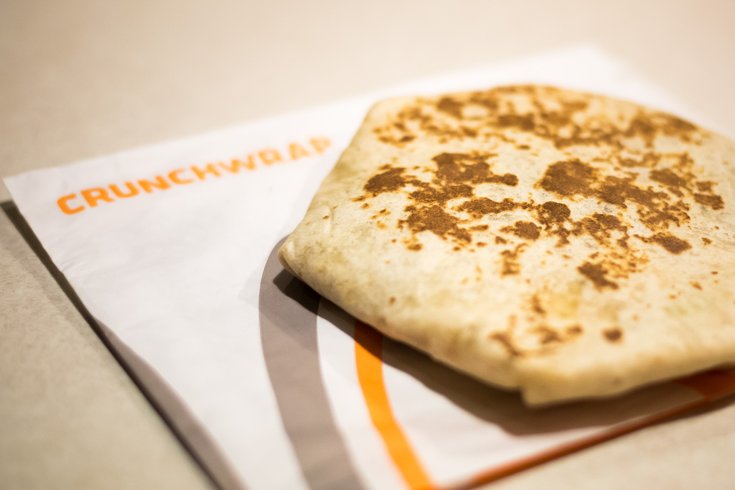 Fast-food companies love the $5 box. So do their customers. After all, it’s a bunch of food in a box and it only costs $5. And this may well be the Summer of $5 Boxes, as multiple franchises are offering their own versions at the same time.

It’s a race to see who can give the most for less, with the restaurants all trying to one-up each other. Popeye’s box has your choice of chicken or strips, a biscuit and two sides. KFC’s comes with your choice of chicken, a biscuit, a side and a drink — and a cookie. Sonic’s box comes with a hot dog, cheeseburger, fries or tots, and a drink, plus their employees will actually chew the food up for you and spit it into your mouth like a bird.

While that may be hard to top, Taco Bell’s new $5 deal comes close. To herald the arrival of the Triple Double Crunchwrap, Taco Bell's new limited-time offer includes a now-legendary Doritos Locos taco, along with a regular, not as loco, taco. The Triple Double Crunchwrap is an expanded version of its Crunchwrap, a tostada in the middle of nacho cheese, beef, lettuce, tomato and sour cream wrapped up and grilled in a tortilla. This time, Taco Bell added another layer of tostada, ground beef and cheese. 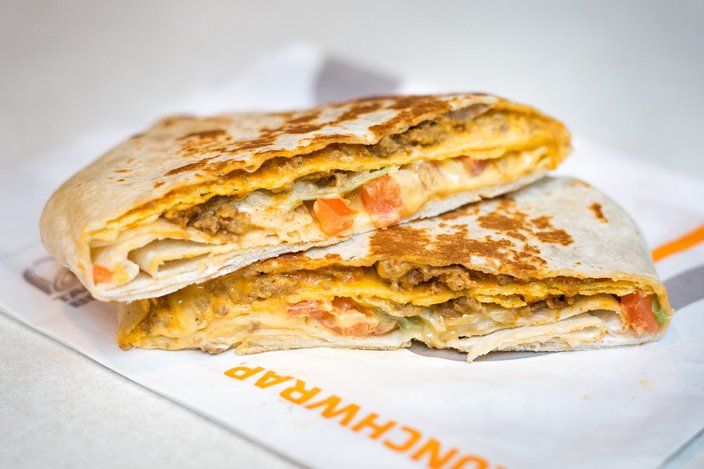 Before the Doritos Locos tacos debuted in 2012, the Crunchwrap was Taco Bell’s best-selling invention. Part of the magic of the Crunchwrap is that the tortilla keeps all the ingredients intact, so there’s virtually no mess. Also, it tastes like junk-food heaven. It’s an almost-perfect combination of ingredients that all complement the work as a whole. It’s basically a mouth fiesta, a phrase you should never Google.

In a size comparison, the Triple Double Crunchwrap is noticeably bigger than a regular Crunchwrap, girth-wise. You have to open your mouth more than you would with a regular Crunchwrap to bite into it. Perhaps this is a deal-breaker for those who don’t want to open their mouth more than they already do. Taco Bell is no doubt hard at work trying to come up with a solution for these people.

The real shocker is that it took Taco Bell this long to do this. It must have been an easy pitch meeting:

“Uhh, how ’bout we make a new Crunchwrap that’s better than the first one.”

“By ‘better,’ do you mean more meat and cheese?”

“Great work, Johnson. You’re getting a raise. We’re all getting raises.”

Verdict: The Triple Double Crunchwrap is bigger and has more stuff, which means it’s better and it was already great. I honestly wish I was eating one right now. 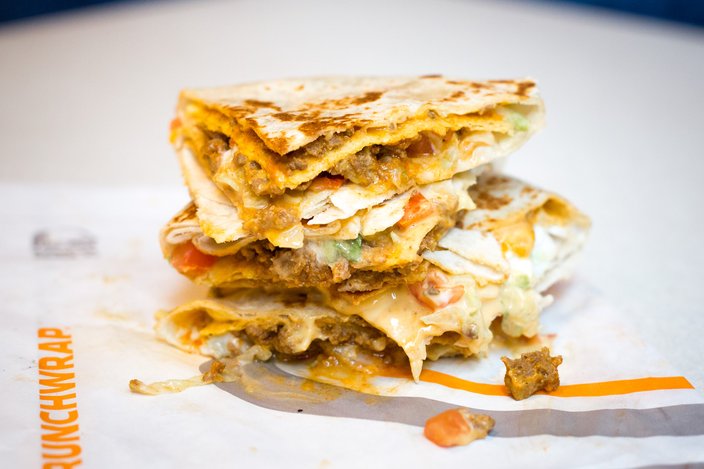