Chunk, a three-year-old golden retriever, was reunited with his family on Tuesday 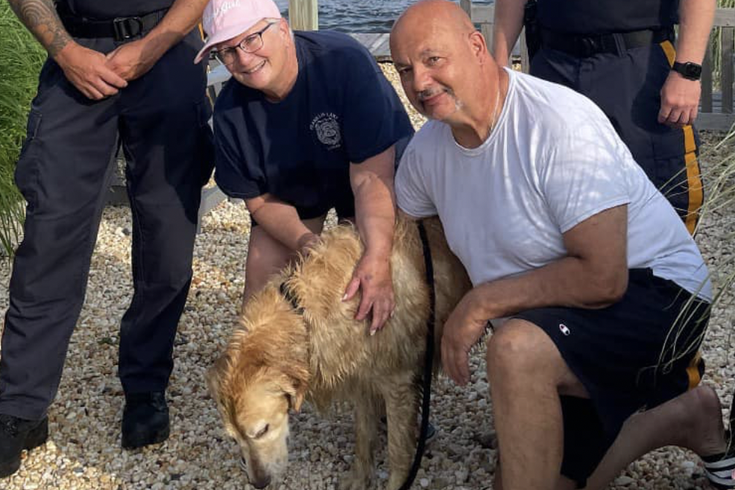 Chunk, a three-year-old golden retriever from Brick Township, New Jersey, was reunited with his family on June 22 after he was reported missing more than two weeks ago. Chunk was found swimming in the Barnegat Bay.

A golden retriever who went missing from his family in Brick Township braved the elements for two weeks before he was recovered safely Tuesday morning. He was taking a dip in the Barnegat Bay, according to New Jersey State Police.

Chunk was reported missing by his family on June 6, about 20 miles from their home in Brick Township. It's unclear whether the family had been visiting the bay at the time the three-year-old dog went missing.

New Jersey State Troopers received a tip Tuesday morning for sightings of the dog in the bay. They responded to the area in a vessel and were able to locate Chunk near the Mantoloking Bridge. He was safely returned to shore and later reunited with his family.

Losing a dog is a stressful experience for pet owners, but they typically have a high rate of recovery. A research study in 2012 found that an estimated 86-97% of lost dogs in the United States eventually find their way home. Those are higher odds than cats, which only made it home between 63-84% of the time in the U.S., according to the same study. Cats are much less likely to be returned to their owners if they end up in a shelter, partly because they aren't tagged or microchipped as often as dogs. Shelters also have more constraints for taking in stray cats.

Most lost dogs are found by searching the neighborhood where they went missing, usually aided by signs and online posts. While a surprising number of dogs do end up finding their way home on their own — up to 30%, according to the study mentioned above — the best thing pet owners can do is make sure that their dogs have up-to-date ID tags or microchips.

In this case, Chunk had himself an adventure and will be pleased to get back to a more comfortable way of life.