By Brandon Baker
PhillyVoice Contributor
Beer The Arts
from 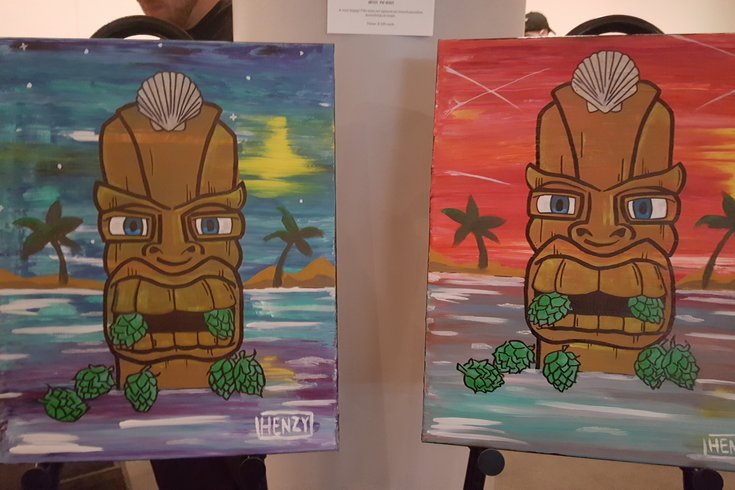 Last night, as part of this year's Craft Brewers Conference, Victory Brewing Company hosted its fourth annual "Amber Waves," a beer tasting that doubles as an art exhibition. Twenty-seven craft breweries from around the country — literally from Maui to Maine — showed up with a different take on amber ales, complemented with a piece of artwork to be auctioned off, commissioned to riff off their brand and their beer of choice. Proceeds from the evening went to the Philadelphia Mural Arts Program.

The event is the brainchild of Victory Brewing Company founder and President Bill Covaleski, who graduated from Temple University's Tyler School of Art in 1985.

"I made the leap to professional brewing in 1990, but the arts — I’ve never quite buried that part of myself," Covaleski told PhillyVoice. "I look for opportunities to celebrate art — whether visual or liquid.”

The pairing of beer and art works well because, he explained, brewers are taught to be resourceful with their limited number of ingredients.

"It’s almost like all brewers are given a palette with only four colors, yet they create these amazing works of art from those," Covaleski said, pointing to grain, hops, yeast and water. "The other part that's analogous between art and beer is both need to have an impact on the audience. And hopefully, it's a positive one."

Below are seven of the funkiest, wackiest and most eye-catching pieces we saw at Covaleski's annual "Amber Waves" beer-inspired showcase. 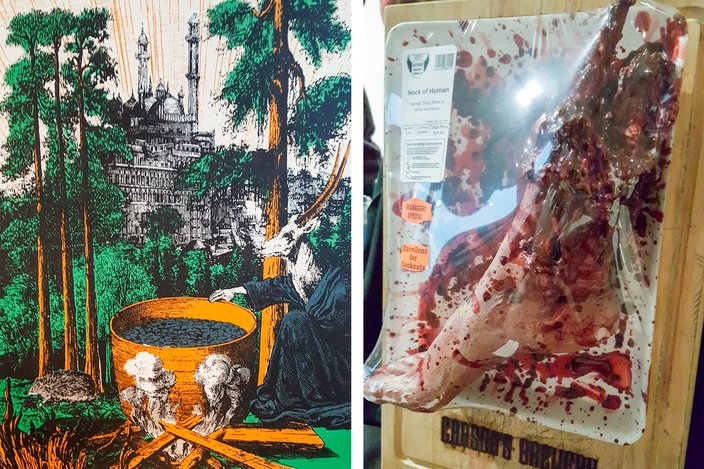 Roadhouse Brewing Company, which hiked here all the way from Jackson Hole, Wyoming, displayed a piece that's ... well, no one's really sure what it is. But its artist, Walter Gerald, was tasked with taking a Phish song and transforming it into a work of art — on that would ultimately end up as "Stone Village Swamp Man." It's a five-color, silk screen print, paired with the company's Flanders Red Ale.

Meanwhile, the "Manager's Special" (aka the severed foot), made by Gore Gallore and commissioned by Indiana-based Carson's Brewery, used styrofoam and a butcher meat tray to complement their Kasket Juice sour red. Why? Why not.

A portrait of George Washington painted with beer paste, commissioned by Yards Brewing Company for the 2016 Craft Brewers Conference.

The portrait, created by local artist Corey Fox, was painted using a beer paste made from a dehydrated Yards Tavern Porter. On the left, meanwhile, is a letter from Washington that's essentially a beer recipe — one that, he writes, "warms the blood." The Philly-based company paired the artwork with their Yards Brawler. 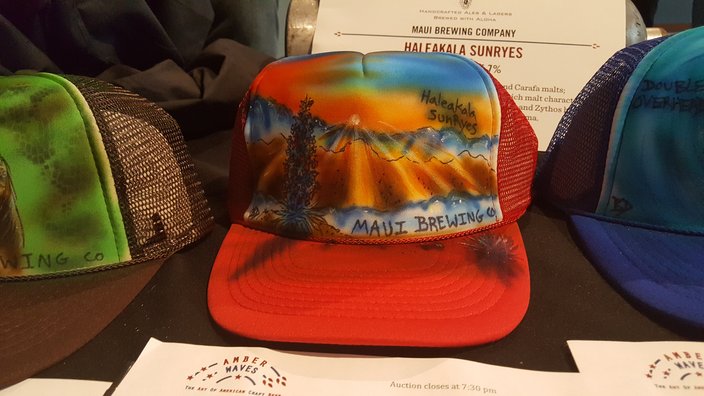 Yes, Maui Brewing Company came all the way from Hawaii — and didn't disappoint.

Among their lineup of hats, created by artist Brenton Deardorf, is a red cap depicting a Haleakala sunrise. Though you won't find that particular cap available for purchase, the rest of them can be ordered online. The brewery, naturally, paired the piece with their Haleakala Sunryes rye IPA. To boot, the sales representative told PhillyVoice, they'll start wholesale shipments in Pennsylvania soon — which will include their Coconut Porter. 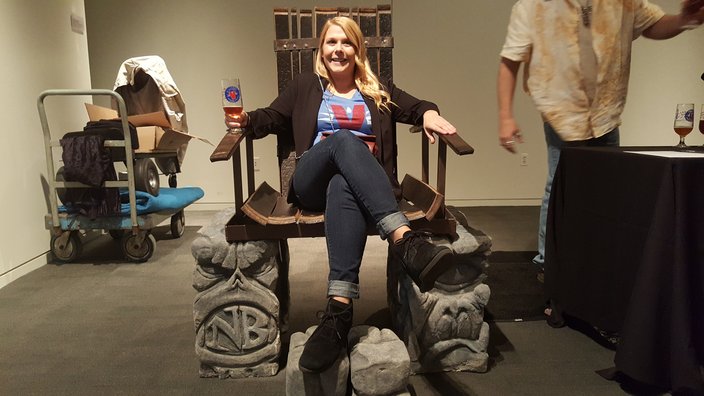 An 800-pound chair made from oak barrels, commissioned by Naked Brewing Company for the 2016 Craft Brewers Conference.

It's not quite the Iron Throne, but it makes quite the impression all the same.

Naked Brewing Company's Jim Crossland and artist Jef Sabalski took recycled whiskey barrel wood (used in the making of sour beer) and combined it with carved concrete to create an 800-pound chair — created to be a functional outdoor furniture item. (At last sight, it was bid on for $350.) The Huntingdon Valley craft brewery paired it with their malty, and mildly hoppy, Dino Dnamber.

These "Night and Day" paintings were created by local painter Pat Henzy, who also creates Conshohocken Brewing Company's beer labels. The pieces portray tikis munching on hops — though, they do look like they're going out, not coming in.

The paintings were paired with the brewery's Blood Money IPA, a brew that tastes like paradise with its super juicy blood orange flavors and Cascade hops. 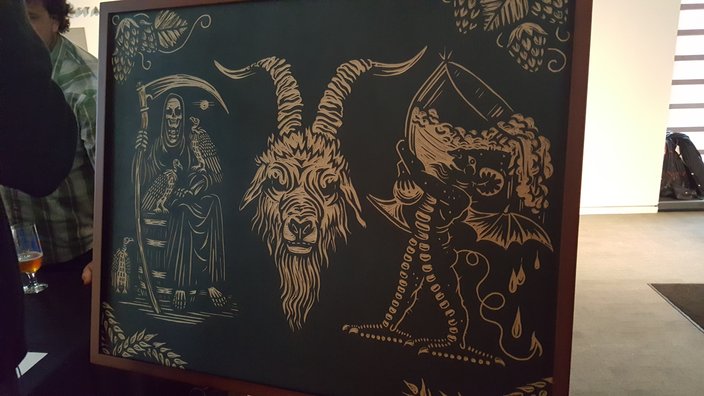 A painting made with relief ink, commissioned by Real Ale Brewing Company for the 2016 Craft Brewers Conference.

The ink painting, made using a relief technique, is a particularly bleak-looking representation of hops — a reaper looms to the left and a demon carries a chalice to the right. Its Austin-based artist used the relief ink technique — one that's as old as anyone can remember — to sync with the idea of just how long humans have been brewing.

Real Ale Brewing Company, celebrating its second decade in the biz, brought along its 20th Anniversary Ale imperial rye IPA — one that's deceivingly light for a 9.5 percent ABV, by the way — for the exhibit. 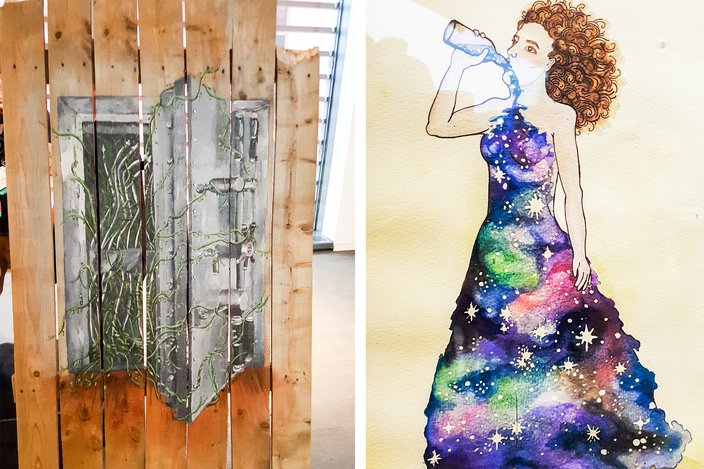 Vault Brewing Company, based out of a 130-year-old bank in Yardley, Pennsylvania, had brewery employee Jackie Black paint whole hops — which the company uses in its beer — coming to life, climbing out of a vault. All painted with acrylic on repurposed barn wood.

"Brewniverse," meanwhile, is a watercolor and ink painting made by artist Meghan Berliner. It's a commission from Portland, Oregon, brewery Ecliptic Brewing. The beer depicted is meant to be "filling her with the universe." The company brought along its Deimos Imperial Red Ale, named after the outer sibling of the other Martian moon. Notably, a representative for the company explained, all of their beers are named after the Old World Calendar; the woman in the painting represents the universal nature of the craft beer industry today.