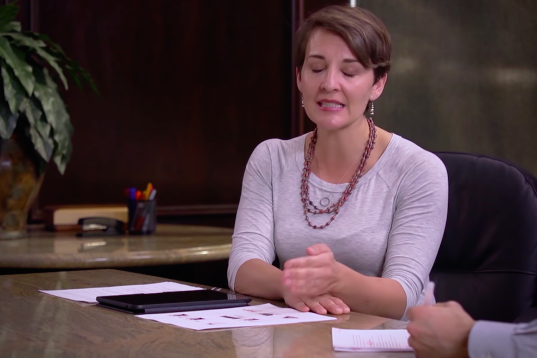 Researchers Joseph Grenny and David Maxfield showed participants videos like this one where either a man or a woman acted forcefully during a business meeting.

“I’m not on board with the direction this decision is going.”

If you had to speak out against a decision in a business meeting, would it be better to do it forcefully or to keep your cool? Researchers showed more than 11,000 subjects videos where actors said the line above and found that being forceful tanks your perceived competency level – especially if you’re a woman.

As researchers Joseph Grenny and David Maxfield explained to Forbes, participants saw videos with either a male or female actor who followed either a neutral script or a forceful, assertive script. The viewers then judged the characters on competency and got to say what they thought that person’s salary should be.

Participants usually rated women higher than men, but they imposed a much harsher penalty for the woman if she seemed angry.

When judged as “forceful” or assertive,” the woman’s perceived competency rankings dropped 35 percent and her perceived worth fell $15,088.

In contrast, a forceful man still suffered, but less. His competency ratings dropped 22 percent and his net worth fell $6,547.

"Few of us are aware we hold this double standard," said Grenny.

He cautioned that even the most well-meaning people can have unconscious biases.

Even if it doesn’t win you any friends, sometimes you just have to stand up and assert what you think is right. Luckily, the researchers found a simple way to mitigate the assertiveness penalty.

In a second experiment, the actors prefaced their criticisms with a short explanation of intent. This explanation took a mere four seconds but dramatically changed how their words were perceived.

For example, when the actor said, "I'm going to express my opinion very directly. I'll be as specific as possible," the assertiveness penalty was reduced by 10 percent.

In other words, the character still suffered some backlash, but not as much.

If the actor said, "I see this as a matter of honesty and integrity, so it's important for me to be clear on where I stand," the penalty was reduced by 16 percent. (However, the study could not prove statistical significance for this particular scenario.)

And sometimes, addressing bias head-on is the best strategy. If a woman said the following, it reduced the assertiveness penalty by 27 percent: “I know it’s a risk for a woman to speak this assertively, but I’m going to express my opinion very directly.”

But the researchers warned that this could be seen as “playing the gender card” and hurt the woman in the long-run.