Ben Simmons' grievance expected to be filed soon, with Sixers-Nets meeting as backdrop 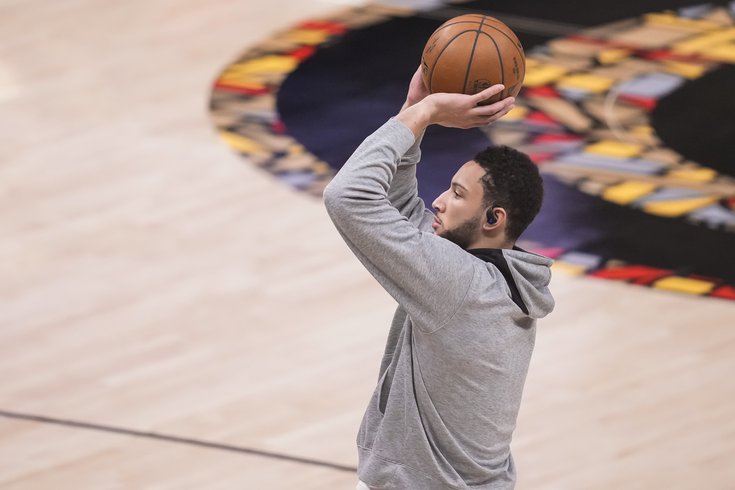 Thursday evening's Sixers-Nets meeting is one of the most anticipated games in South Philly in recent memory, a spectacle with battles within battles within battles. There's Kevin Durant vs. Joel Embiid, James Harden vs. his former teammates, and Ben Simmons vs. just about everybody. It's that last piece many are focused on, with league sources anticipating that Simmons and his representation will file a formal grievance against the Sixers at some point in the coming days.

The expected move has been a long time coming. Dating back to the fall, there have been many around the Sixers' organization who have chosen to go radio silent on all things Simmons, aware that arbitration was a likely outcome for this process. And anyone with a rudimentary understanding of finances also probably could have seen this coming — nobody likes to throw away $20 million even if they have than that in the bank or coming to them down the road.

The suggestion has been floated in league circles that Simmons showing up for Thursday's game is merely setting the stage for Simmons and Klutch Sports' argument when the grievance is filed. Reports of an increased security presence at Thursday's game circulated on Tuesday morning, which a cynical observer would say is meant to combat the venom directed at Simmons specifically. The security detail for that game, however, has been described simply as a "playoff-level crew" with consideration for a number of factors, including increased celebrity presence and a larger media contingent, in addition to the obvious angle regarding Simmons and the Nets.

Put Simmons in the middle of that storm, the argument goes, and it's believed that will be Exhibit A in the case of why Simmons could not and did not fulfill his obligations for the Sixers prior to being traded, why he was unprepared to work for this franchise prior to being dealt. And the debate over Simmons' obligation to the franchise is what will ultimately take center stage, even if Simmons' side of the argument appears to be fighting an uphill battle in their quest to recoup his lost money.

Following the conclusion of last season and leading into the start of this season, Simmons and his representatives offered repeated fleeting explanations for his desire to be traded elsewhere, and eventually those explanations changed to why he simply wouldn't/couldn't do his job. Those ranged from alleged anger over being included in talks for James Harden, frustration over Embiid and Doc Rivers' comments following Game 7, a back issue, and a mental health explanation that ultimately led to a team meeting, with Simmons telling his teammates in late October he was, "not mentally ready to play."

The legitimacy of that mental health claim was not and has never been challenged by the Sixers, though the two sides have even found a way to squabble over that. In mid-November, The Athletic's Shams Charania published a quote from agent Rich Paul suggesting that Philadelphia fining Simmons was doing additional damage to his client:

“I truly believe the fines, the targeting, the negative publicity shined on the issue — that’s very unnecessary and has furthered the mental health issues for Ben,” Klutch Sports CEO Rich Paul said. “Either you help Ben, or come out and say he’s lying. Which one is it?” [The Athletic]

Those fines were levied as a result of a very basic disagreement between the two parties. Simmons would not see the supplied team doctors to address the issue, and though reports have suggested that he has seen someone through the NBPA, the Sixers never received documentation that provided them with either an explanation for his absence or a treatment plan to put him in a position to be available at some point this season. League sources who spoke to PhillyVoice in the fall described the process as no different from if a player saw an outside specialist for a bone break or ligament tear, the team needing to be kept in the loop regarding what an injury is and how it's meant to be dealt with.

The mental health claim will become a central component of the grievance for more reasons than that. Immediately upon being traded to Brooklyn, Simmons has been seen doing an assortment of things that he and his agency asserted he was unable to do with the Sixers, including working out with teammates, sitting on the bench with teammates, or traveling with the team in any capacity.

Though many on the outside dismissed the idea of Simmons being part of the Sixers again — that skepticism was well-placed — there were repeated efforts from the organization to bring Simmons back into the fold. Teammates had organized a potential trip out to California to visit Simmons prior to Simmons shutting that down. The night of Philadelphia's home opener against Brooklyn, Joel Embiid asked the crowd in South Philadelphia to support "our brother" Simmons, hours after the aforementioned meeting with the team regarding his inability to play:

Those attempts to bring Simmons in ultimately didn't lead to a material change in his approach. Now that a trade has been completed and Simmons got what he told the team he wanted dating back to August, the indication is that they want the money he lost as well, in spite of the refusal to cooperate with basic rules and understandings laid out within the CBA.

Based on conversations with league sources and several people familiar with the NBA's collective bargaining agreement, the early indication is that the Sixers are in a much stronger position here. That has seemed true throughout this process, including when Simmons' representation approached the players association in early October about their ability to recoup money from this standoff, though it will ultimately be up to an independent arbitrator if and when this process moves forward.

In any case, Philadelphia's treatment of Simmons will be under the microscope once again, if it has ever escaped the glare in the first place. It wouldn't have fit the last eight months of drama if the first meeting between Simmons and his former team was actually about the basketball game being played on the floor on Thursday night.