Instant observations: Sixers beat up Bulls behind 43 from Joel Embiid 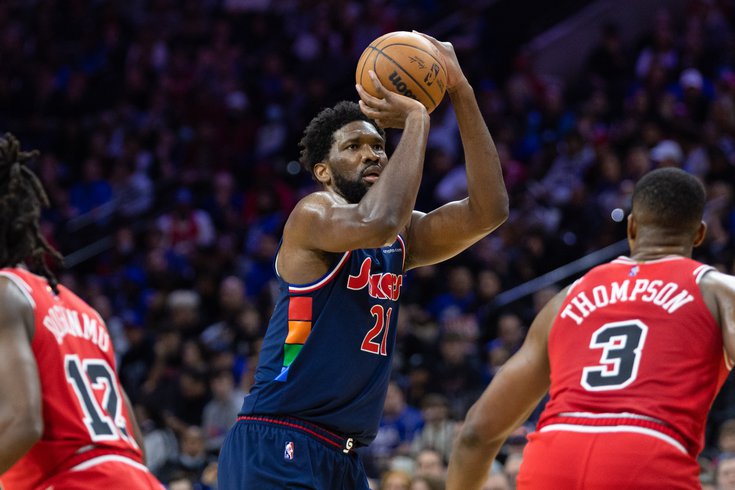 Joel Embiid had a monster night to help the Sixers handle the Bulls in a battle of eastern conference contenders Monday.

Joel Embiid absolutely dismantled the Bulls in another classic performance on Monday night, leading the Sixers to a 121-106 win with 43 points and 14 rebounds.

• Joel Embiid has had some big performances against the Bulls the last two seasons, and before the game even started, the stars looked to be aligned for another masterpiece. Even if Embiid has handed Nikola Vucevic his ass on multiple occasions, he still poses more danger to the big man than the Tristan Thompson/Tony Bradley combo they had available for Monday night's game.

Before the first quarter was over, Embiid made damn sure to take advantage of those matchups, picking up a quick 11 points while spreading four fouls across those two guys. That's how big games snowball in a hurry for the big man — the players expected to guard him have to second guess whether they're playing him with too much physicality, and then he starts blowing by people and scoring easy ones at the rim.

LET 'EM KNOW WHOSE HOUSE THIS IS, JO. pic.twitter.com/OMGQE86HXb

Tristan Thompson's night felt indicative of the sort of season Embiid is having. While Thompson's better days are behind him, he's a big with deep playoff experience and plenty of savvy. When Embiid made him take his fourth foul in the third quarter, Thompson seemed to ask Bulls coach Billy Donovan to keep him in the game, ensuring him he would avoid picking up another foul before the fourth quarter.

On the ensuing possession, Thompson got caught with his hand in the cookie jar, and Embiid drew his fifth foul with a rip-through move. Whoops.

This felt more like the Embiid we saw prior to Harden's arrival, a dominant force who had the offense running through him at basically all times. Harden helped him out a good bit in this one, even trying to do so when it led to some errors and turnovers they'd probably like to have back. I'd argue that's a positive sign even with those turnovers — Embiid was a little off the pace the past two games, and Harden made damn sure to get his big man touches to keep him happy, which ultimately ended up being the best thing for the team and their offense.

(Embiid was even able to laugh with Harden about one of those turnovers in the first half, with Harden going behind the back and Embiid stuck between popping and rolling after the screen. The two dapped it up around midcourt and moved on. There's work to be done that they're both aware of.)

Unlike those last two matchups with the Heat and Cavs, Embiid was dialed in defensively early on, and with the back end of their defense more sturdy than it had been in previous games, the Sixers looked a little more cohesive overall, even though it didn't help their massive rebounding problem. His rim protection was immense, and his ability to defend somebody like DeMar DeRozan in isolation, even if only for a few quick possessions, is what sets him apart from a lot of his peers at center.

There have been a lot of games this year where Embiid has waited until the second half to flip the switch and exert himself on defense, but they're going to need more of these wire-to-wire games when they're locked in playoff battles this spring. When he wants to be, he is a two-way force very few players (if any) can match. Perhaps it's as simple as the rest of the team doing more setup work for him, lightening his offensive load so he can go all out on the other end.

The ecosystem around Embiid was phenomenal in this game. There were beautiful lobbed entry passes from Georges Niang, the aforementioned drop-offs from Harden, and actions that helped him clear out a side of the floor and get one-on-one matchups, using structure to make his life easier. He delivered elite results with just a bit of help. In a closer game, this is probably a 50-point performance, but what he offered was more than enough.

• Harden checked back into the game with a couple of minutes left in the first quarter and turned the volume in the Wells Fargo Center up to 11. All it took was a little bit of assistance from bench shooter Georges Niang, who has been a massive winner of the Harden trade early on.

The 1-4 ball screen using Harden and Niang is providing the former an open catch-and-shoot three basically every time they run it, and Niang canned one immediately to get the people going. Stationed on the wing a possession later, Niang made another three after a Harden/Embiid action in the middle of the floor drew all of Chicago's attention. Easy money.

And then Harden came in with the cherry on top, tying Reggie Miller for the third-most made threes in NBA history, drilling a step back after some through-the-legs dribbling at the top of the key.

There is nothing like a one-man show to bring a team and a building to life, as this city experienced during Allen Iverson's peak and has seen during some insane Embiid runs this season. Harden's showmanship is part form, part function, and both those pieces play a part in helping a team go on runs, with the "oohs," "ahhs," and cheers giving the rest of the group a lift and putting visiting teams on edge.

Harden's passing in this game was a little too adventurous, leading to some avoidable turnovers in both halves, and this was his first real down night as a scorer in Philadelphia, with Harden struggling to find his touch from deep and never really finding a supplementary plan in the painted area. The beauty of the performance is that they didn't really need that part of Harden's game, because the fear he struck in Chicago opened opportunities for other guys all over the floor. People believing you can score is often as powerful (if not more powerful) as the actual ability to score.

• Matisse Thybulle is outright harmful to good offense on some nights, but Harden turned him into a legitimate weapon in this game, and has certainly found some chemistry with No. 22 in their time together so far. Thybulle's cutting and the ability to dunk from a standstill proved useful playing off of Embiid in the post, and Harden has helped him find a new niche — as a roller in a pick-and-roll.

With a passer of Harden's caliber at the controls, all someone like Thybulle has to do is be ready for the entry when Harden turns the corner and sees two defenders converging on him. Thybulle still had some work to do on a couple of those finishes around the basket, but an offensive niche that doesn't require him to dribble or shoot jumpers taps into his strengths without highlighting any of his weaknesses.

• If Niang stays on this team through the end of next year, Harden might make him a lot of money on his next contract. He is absolutely eating right now.

• Everyone who has been begging for Doc Rivers to change the rotation got their wish on Monday night. Furkan Korkmaz and his bright yellow shoes were parked on the bench, with Shake Milton getting a chance to be the first guard off of the bench and Isaiah Joe playing cameo minutes at the start of the second and fourth quarters.

Whether the results were actually there or not is sort of a different story — Joe got smoked on a couple of defensive possessions and missed several wide-open threes across two halves, but as many others have pointed out, it would be nice to see him get a real chance to establish himself in the rotation before writing off his ability to do so. With Harden dealing from the middle of a zone in the fourth quarter, Joe hit a corner three late in his second-half run, and perhaps that will give him the jolt of confidence he needs.

• Tyrese Maxey's inevitable shooting regression hit in this game — he wasn't going to be borderline perfect on catch-and-shoot jumpers for the rest of his career — but he still had one of the highlights of the game, tossing in a circus-shot layup midway through the fourth quarter to put the icing on the cake of a strong team win.

Tyrese Maxey just broke our brains with this finish 🤯 pic.twitter.com/ux8dDUsvgA

They didn't really need much from him against Chicago, and it's nice to have that luxury.

• On his best day, Tobias Harris is not the best rebounder at the power forward spot. It would have been nice to see him approach anything close to that best-day level on Monday night, because he visibly did not give a damn on several plays where other guys blew right by him for rebounds.

The most egregious example came after a missed Chicago free throw early in the second quarter, with diminutive Bulls guard Coby White coming into Harris' airspace and just ripping the ball out of the air, with Harris offering basically no resistance, allowing the Bulls to score on an extra possession they never should have had.

Those plays are the reason Harris gets very little slack when he struggles on offense, or at least struggles to hit the shots that the Sixers need him to hit in order to be a title team. Saying that Harden is creating open shots for him undersells just how much space is between Harris and the closest man when he's getting some of these threes up. There are possessions where Harden creates basically a 10-foot bubble of space around Harris for a three, and the shot still never comes close to going down, with Harris struggling to do the one thing that should theoretically come easiest for him.

I did think Harris bought in and tried to give DeRozan trouble on the defensive end, with Chicago's dark-horse MVP candidate simply playing better offense some of the time. But Harris is ultimately not going to be able to provide enough value on that end in order to be an effective role player on this team. They need him to get comfortable as a shooter, and that looks easier said than done.

• It turns out that DeAndre Jordan did not solve Philadelphia's rebounding problem. If only anyone could have foreseen this.

• The Bulls are either the best bad team or the worst good team, I can't decide which. They're one of the few teams in the bracket I would have no concerns about Philadelphia beating in a series. Embiid would score a million points against this lot.

That's especially true if the Bulls decide to double Harden to give Embiid a free lane to the rim (save for the "low man" being in his way) every time the Sixers run a Harden/Embiid pick-and-roll. Billy Donovan should just throw that plan in the trash.