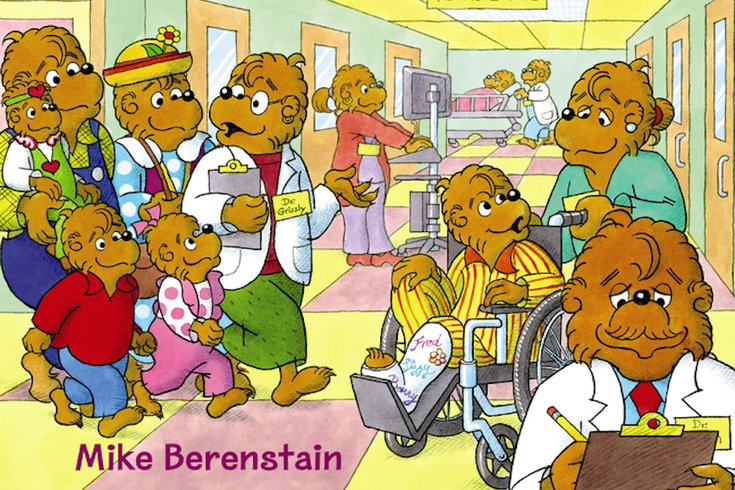 Since Stan and Jan Berenstain, the Philly-born authors behind the beloved "Berenstain Bears" children's book series, passed away in 2005 and 2012, respectively, their son Mike has taken up the mantle. Mike continues the series' legacy of teaching children valuable lessons by writing modern stories about the lovable bear family and their everyday lives.

With his newest work, "Hospital Friends," Berenstein is creating possibly the most educational addition to the series by giving children a basic, though thorough, understanding of a hospital. The book, released April 21, was created in collaboration with the Children's Hospital of Philadelphia, and the author's royalties are being contributed to the Stan & Jan Berenstain Healthy Kids Foundation, which funds projects for improving children's health.

In the story, the Berenstain family visits a cousin in the hospital who has had a tonsillectomy. While on a tour of the hospital with the family doctor, they visit the operating room, see patients receive physical therapy and even witness a helicopter land on the roof.

By working with CHOP, the author was able to visit the hospital for research, shadowing doctors in various departments and spending days sketching families and patients. In the end, he worked closely with CHOP to decide what would be useful for children to know and to make sure the book would help them through their medical experiences.

"We were very careful to have everything in the book feel very simple and comprehensible to children but very accurate medically, but also we don’t want to be frightening," Berenstain said. "We wanted to be reassuring and affirming of how hospitals are a safe place where they’ll take care of you."

While touring with the book and visiting schools, Berenstain was surprised to find that many children related directly to the story and that it was helping them deal with sometimes traumatic hospital experiences.

Of course, fans of the series were quite excited to meet Berenstain, who also grew up in Philadelphia and now lives in Montgomery County. But many were particularly excited that their experiences might be included in the book.

"A lot of the people were very interested and excited about the fact that the sketches I was doing were going to be incorporated as bears, translated into bears in this book," he said.

One family was happy to find that their daughter, who had been sketched by Berenstain while receiving physical therapy, would be included in the book. Berenstain later sent her illustrations of her "bear self."