As the U.S. braces for another winter with COVID-19, the president is again stressing vaccination 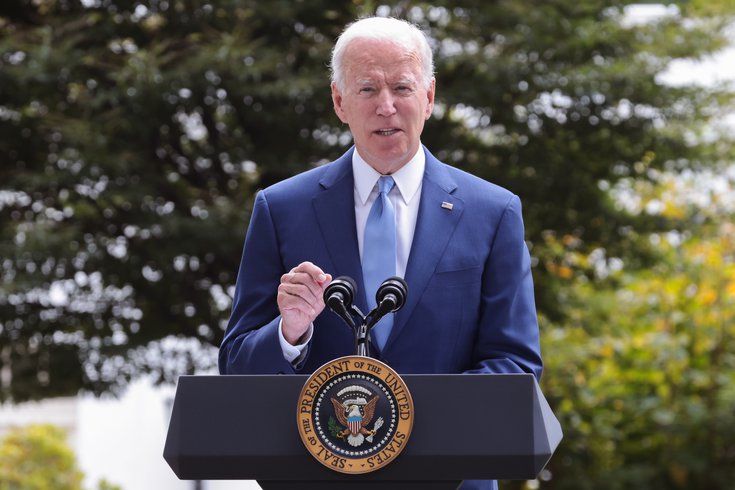 President Joe Biden said he contacted a Pennsylvania hospital to hear about emergency room delays after a close friend's wife became ill and was having trouble getting the care she needed. The Biden administration continues to push for COVID-19 vaccination and vaccine requirements ahead of the winter to avoid another deadly surge in the U.S.

President Joe Biden reached out to a hospital emergency room in Pennsylvania to inquire about the wait time for a friend's wife to receive care for apparent COVID-19 symptoms, he said Thursday during a speech urging vaccination in Illinois.

Biden was at the Clayco Construction Site in Elk Grove yesterday to push for more Americans to get vaccinated ahead of the winter. Last year, the holiday season brought a spike in hospitalizations and deaths prior to the broad availability of vaccines.

During his speech, Biden talked about the strains faced by hospitals across the U.S. and brought up his experience placing a phone call to an unnamed Pennsylvania hospital. His friend's wife had gone to the emergency room with worsening symptoms, but was having trouble getting a room.

"She was having trouble breathing, had a high fever and could not really catch her breath. And they got her into the hospital, but the waiting room was so crowded, things were so backed up, they couldn't even get her to be seen initially," Biden said.

Concerned for the woman's wellbeing, Biden picked up the phone.

Biden didn't say whether his efforts expedited medical attention for the woman, but he said the experience is one shared by many Americans.

"I'll bet every one of you can name somebody who got sent to the hospital with something other than COVID and couldn't get it taken care of. How many people do you know — I know — who've had to put off elective surgery — surgery they need done — but they couldn't get a hospital room?" Biden said.

The president's speech addressed the federal government's new vaccine mandates, which will require a large portion of the U.S. workforce to get immunized. They come in addition to private organizations that have independently required employees get vaccinated. The details and requirements of the federal mandate is being developed by the Occupational Health and Safety Administration.

As of Thursday, 56% of the U.S. population is fully vaccinated and new cases of COVID-19 have been trending downward after a summer surge driven by the delta variant.

Hospitalizations and fatalities also have been declining over the past month. The U.S. Department of Health and Human Services says about 69,000 Americans currently are hospitalized with COVID-19, down from approximately 104,000 on Sept. 1.

The nation's average daily death toll, which stood at about 1,680 over the last week, has fallen considerably from an average of about 2,050 deaths per day as recently as the week of Sept. 22.

The pandemic has seen peaks and valleys before, but the combination of the delta variant and widespread vaccination have made the country's current status — and what lies ahead — more difficult to gauge.

Falling case counts are a positive sign, but infection rates are still higher now than they were at this time last year, before the deadly winter surge. Even as recently as June, before the delta variant accelerated transmission, the U.S. had been averaging as few as 11,400 new cases per day.

How well the country fares this winter will depend on a number of factors. The most favorable is that 84% of people over age 65 are now fully vaccinated and 95% have gotten at least one dose, greatly reducing the chance of serious infection and death among the most vulnerable group of Americans.

There are reasons for both optimism and pessimism in the months ahead, much of it hinging on whether unvaccinated Americans opt to get a shot and how much buy-in there will be among parents to get children under 12 vaccinated once they become eligible, which is expected soon. Additionally, the possibility of a new variant emerging remains an ever-present threat.

Biden said he believes the situation is looking up, but that the nation's best strategy remains vaccination. He defended the federal mandate in the works and stressed that evidence from public and private organizations shows vaccine requirements work.

"Reports show that vaccination requirements have broad public support," Biden said. "Yes, some object, and some object very strenuously, and some are making a political statement out of this issue. But a strong, bipartisan majority of Americans support vaccinations. They know it isn't about politics. It's about life and death."