A COVID-19 vaccine for young children advances one step closer 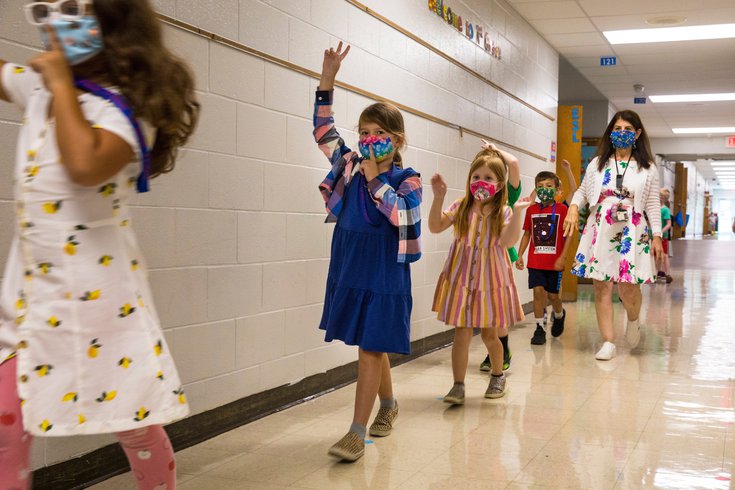 Pfizer says its COVID-19 vaccine has proven safe and effective in children ages 5-11. Above, first graders at J.F. Burns Elementary School in Ohio.

Pfizer will ask the U.S. Food and Drug Administration to authorize its COVID-19 vaccine for children ages 5-11 in the coming weeks, the company said Monday.

Pfizer released data showing its vaccine was safe and effective in a Phase 2/3 trial — the first results to be released. FDA officials have said they could issue an emergency use authorization within weeks of data being formally submitted.

The 2,268 children involved in the clinical trial were given a smaller dose – 10-micrograms – than the 30-microgram dose used among older children and adults. They all received two shots administered 21 days apart.

The 10-microgram dose "was carefully selected as the preferred dose for safety, tolerability and immunogenicity," the company said.

At higher doses, the vaccine led to more side effects in younger children, Dr. Bill Gruber, a senior vice president at Pfizer and a pediatrician, told The New York Times. The 10-microgram dose was well-tolerated, producing fewer fevers and chills among the children.

The youngest of the children in the trial, ages 5 and under, are receiving a dose of just three micrograms.

The trial included a control group of 16- to 25-year-olds as a comparison. They were given a two-dose regimen of the 30-microgram shot. The immune system responses in the younger children were as strong as they were in the control group, Pfizer said. The side effects also were comparable, with no significant adverse reactions.

A Pfizer spokesperson told CNN that there were no cases of myocarditis, a type of heart inflammation that has developed in rare instances among people who have received the Pfizer and Moderna vaccines.

Throughout the pandemic, children generally are thought to have a less severe reaction to COVID-19 than adults. But with the delta variant now predominant, more children are requiring hospitalization.

"Since July, pediatric cases of COVID-19 have risen by about 240% in the U.S. – underscoring the public health need for vaccination," Pfizer CEO Albert Bourla said. "These trial results provide a strong foundation for seeking authorization of our vaccine for children 5 to 11 years old, and we plan to submit them to the FDA and other regulators with urgency."

The Pfizer vaccine, developed with BioNTech, has been FDA-approved for people age 16 and older and authorized for emergency use in children ages 12-15.

The vaccine also is being studied in children ages 2-5 years and ages 6 months to 2 years. Up to 4,500 children 11 and under have been enrolled in the United States. Pfizer said it is hoping to release clinical trial data on children as young as six months before the end of the year.