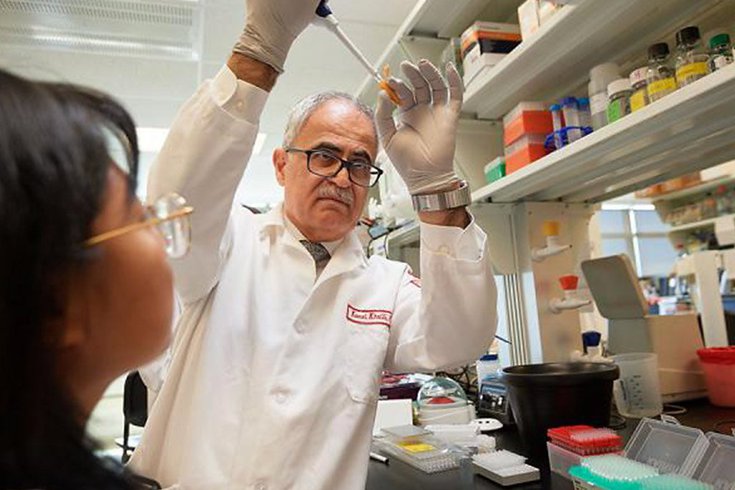 Kamel Khalili, a microbiologist at Temple University, played a key role in developing a potential HIV cure that will begin human studies.

Temple University researchers are preparing to begin clinical trials on an experimental HIV therapy that they believe could become the first functional cure for the virus that causes AIDs.

The new, CRISPR-based treatment recently was accepted by the U.S. Food and Drug Administration as an investigational new drug, paving the way for human trials.

The treatment uses gene-editing technology to eliminate HIV DNA that wraps itself around the genes of host cells. In preclinical trials, researchers successfully eliminated HIV from human immune cells and mice. They also used it to extract SIV — a closely related virus found in primates — from macaque monkeys.

The human trials will be one of the first attempts to directly extract the latent virus from DNA.

They will be carried out by Excision BioTherapeutics, a company co-founded by Temple microbiologist Kamel Khalili. Earlier this year, Excision announced it had secured $60 million to fund the trials.

"It takes vast scientific skill and innovation to create a therapy with life-changing potential," Goldberg said.

CRISPR gene-editing technology allows scientists to modify DNA in humans, animals and plants. It has the capability to do everything from making drought-resistant corn to adding mutations that predispose people to diseases.

The HIV treatment is designed to be given once intravenously. The upcoming trial will test its safety, tolerability and efficacy in healthy people with HIV. If it is deemed safe, researchers hope to conduct later studies where people will be taken off their antiviral medications to test the therapy as a potential cure.

While advancements in antiviral medications have made living with HIV more manageable, developing a cure for the virus has proven to be a decades-long challenge. HIV coils itself into the DNA of healthy cells, making it very difficult to treat.

A vaccine has proven elusive too.

Last week, a primary analysis of Johnson & Johnson's HIV vaccine showed it did not offer significant protection against HIV, despite promising pre-trial data. There have been several other failed vaccine attempts, including a candidate out of Merck that actually raised the risk of getting HIV.

Moderna is working on an HIV vaccine that uses the mRNA technology used in the pharmaceutical company's COVID-19 vaccine.