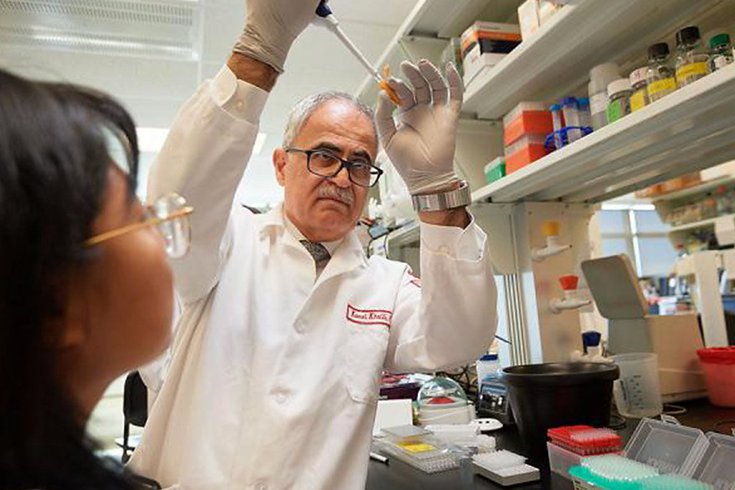 A biotech company co-founded by a Temple University researcher has raised $60 million to establish a clinical trial testing a potential cure for HIV.

Excision BioTherapeutics believes a therapy developed using the genome-editing technology CRISPR may eradicate the virus from human cells and tissues. The company also is developing similar therapies for other chronic viruses, like herpes and hepatitis B.

The CRISPR technology works like "molecular scissors" that can cut DNA at any given point, Endpoints News reported. In theory, a researcher could cut HIV from a patient's DNA. Still, some researchers are skeptical of the success because HIV is known to hide in hard-to-reach places.

When Excision's Kamel Khalili, a researcher at Temple, previously used this approach on mice infected with HIV, about one-third were cured.

He also led a study, published last year, that used CRISPR to successfully remove SIV — a virus that behaves similarly to HIV — from rhesus macaque monkeys, leaving researchers optimistic that they are getting closer to an HIV cure.

If Excision's HIV therapy works, it could provide a single-shot cure to the 38 million people worldwide with HIV. The clinical trial is expected to begin later this year.

The funding was announced Wednesday.

"This transformative financing will accelerate and support the research we have developed over the past decade," said Khalili, who chairs the neuroscience department at Temple's Lewis Katz School of Medicine. "We are optimistic that ongoing research will demonstrate the potential for a future therapeutic to generate functional cures for viral infectious diseases."

We truly appreciate the support, @vasudevbailey and @ArtisVentures! Very fortunate for all of our incredible partners! 🙏 https://t.co/UdXLfPlACp

Funding for the trial

There is currently no cure for HIV, though antiretroviral treatments can keep it under control. Without treatment, patients are at risk for serious diseases like tuberculosis, lymphomas and Kaposi's Sarcoma.

HIV can develop into AIDS, which significantly weakens the immune system. However, access to antiviral treatments has reduced AIDS deaths in many developed countries.

Excision, which has offices in Philadelphia and San Francisco, has been developing CRISPR therapies since forming in 2015. Temple reportedly owns an equity interest in the company.

Khalili previously told the Philadelphia Business Journal that the company's goal is to cure AIDS.

"However, what we're working on is not exclusively focused to the HIV/AIDS virus, but multiple viruses. … There are virtually no areas that are off-limits here," Khalili said.