Why is preventing disease so much harder than treating it? Because it requires behavioral change 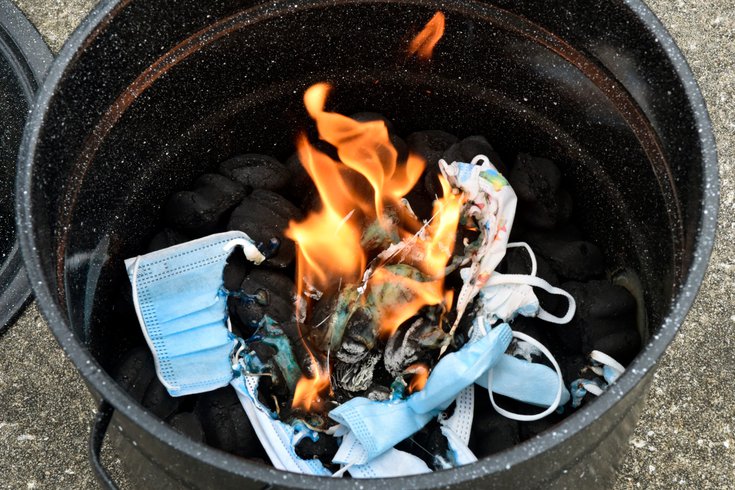 The COVID-19 pandemic has brought the issue of behavior change to the forefront like nothing before. Above, masks are burned at an anti-mask protest in Viera, Florida.

There's a lot of talk these days about the future of health in the U.S. One practice getting a lot of attention in the post-COVID-19 dialogue is telemedicine. COVID has highlighted the use of telemedicine and the increased access to care and convenience that it brings. It's all the buzz.

According to Todd Askew, the American Medical Association's vice president of advocacy, "We have moved forward a decade in the use of telemedicine in this country and it's going to become, and will remain, an increasingly important part of physician practices going forward."

Most recently, Merck & Co. announced a new COVID treatment, a pill that reduced hospitalizations and deaths by half in people infected with the coronavirus. If approved for use, the pill could serve as an alternative to remdesivir which needs to be given by IV or injection.

These are important advances, but what's notable in these two highly-touted examples is that they each center on treatment. The prevention of disease has proven to be much more challenging. Why? Because prevention typically requires behavior change. And that's the rub.

COVID has brought the issue of behavior change to the forefront like nothing before. Whether vaccinations or mask wearing, these behaviors have long left the purview of health and reside in the world of social, political and cultural phenomenon. While COVID offers an extreme example, behaviors often are driven by social and cultural trends. Those associated with COVID are just much more familiar — and controversial.

Despite the controversy, there is no debate among medical experts that preventing someone from becoming sick is a much better strategy. Unfortunately, deferring the rigor required for prevention is the preferred course for far too many Americans — whether for COVID or other preventable illnesses. Well before COVID, Americans bought into the notion that if you can just take a pill, all will be good with your health.

The next public heath crisis

Next to COVID, many believe that obesity is America's next behavior-impacted public health crisis. The Centers for Disease Control and Prevention recently released a report showing that 35% or more of residents in 16 states were considered obese in 2020. That's up from 12 in 2019 and nine in 2018.

Back in 2018, the Commonwealth Fund described the growth in obesity as a grave public health threat, more serious than the opioid epidemic and just as deadly.

Why is changing health behavior so difficult? Back in 2016, researchers Michael P. Kelly and Mary Barke examined the question. They concluded that changing health behaviors involved complex social, political and economic factors which influence people's health. They went on to suggest that powerful vested interests may not want people to adopt more healthy ways of living. Their reference was to highly profitable industries selling goods which make people ill, like sugar-rich, energy-dense fatty foods, alcoholic beverages and tobacco. While the application is slightly different, you can see the COVID experience in their comments.

Despite the difficulty of achieving broad-based change in health behaviors, America does have examples where this has been accomplished; seat belts and smoking being the most significant illustrations. In these examples, the winning strategy to increased seat belt use and reductions in smoking was a mix of new laws, regulations, education and consistent public messaging – paid for with tax dollars. Yes, there was some griping, but in hindsight, the efforts were successful. Today, seat belt use is standard procedure, and smoking is now a cultural exception.

I'm on record suggesting that the silver lining in COVID is an increased attention to our health behaviors. As I consider the new level of complexities emerging from COVID, I'm concerned about our collective strength to overcome these hurdles in a post-COVID era.

Has COVID killed any chance to advance positive practices and curb the growth in obesity? Will any steps to reduce unhealthy behavior be perceived as an invasion of our personal rights and freedoms? Are we destined to hear cries of government overreach if policymakers begin to impose restrictions or penalties on those who promote unhealthy products?

As a society, we have a history of accepting educational messaging if it is consistent, documented to be true and sustained. But, will today's social media disrupt this traditional means of spurring behavioral change? Have we crossed some cultural threshold that ignores the sum total of our behaviors for the right to slowly and methodically cut short our lives and forego memories with the ones we love?

The pandemic has now killed over 700,000 Americans and many of those deaths can be directly traced to an unwillingness to change behaviors. If we cannot change behavior when death is at our collective doorstep, how will we tackle the emerging impact of obesity and its ability to fuel a growth in chronic disease after years of decline?

I remain optimistic. Deep down we are motivated by the emotional relationships that drive our very being. Yes, someone did promise us an easy ride. We see it with every ad for the next pill that will make things all right. There's more to it then that and I think we all know it. Change is hard, but when it comes to health behaviors, the effort is so worthwhile.