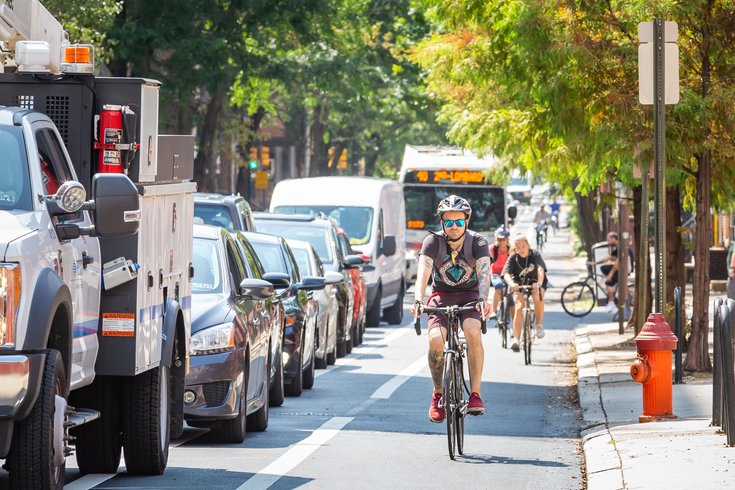 Cyclists ride in the bike lane along Pine Street in Center City, July 25, 2019. For safety purposes, the bike lanes along Pine and Spruce Streets are currently being switched from the right-hand travel lane, which they has been for years, to the left-hand lane.

Updates to the bike lanes on Spruce and Pine streets have finally begun this month in conjunction with roadway resurfacing and the installation of new intersection treatments.

The project was initiated with the intent to reduce the number of possible crashes that occur between right-turning vehicles and cyclists and improve on-street parking and loading for residents and businesses.

Work will be done in phases and include temporary full-street closures, according to the Philadelphia Streets Department. Once paving is complete, the left-side bike lane will be striped. And this fall, crews will go out to the major intersections to apply green paint and install delineator posts.

The bike lanes on Spruce and Pine were the first buffered bike lanes added to Philly streets and are the most-biked in the city. 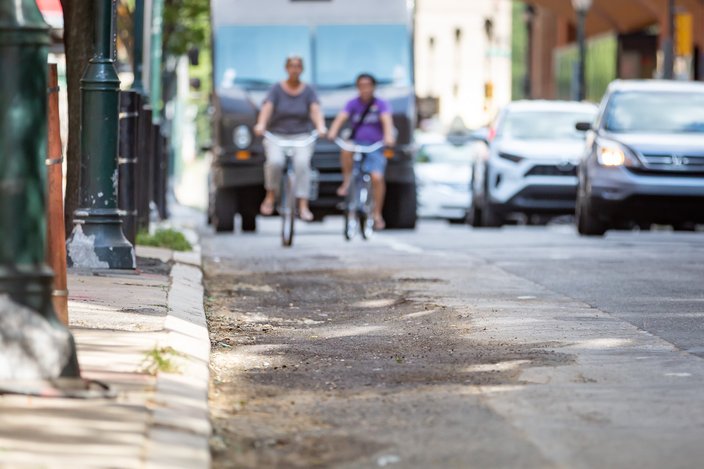 In addition to an abundance of vehicles parked in the bike lane on Spruce Street, cyclists avoid a multiple blocks-long construction project which has left many of the current bike lanes in Center City a disaster.

The Bicycle Coalition of Greater Philadelphia has said the lanes have "deteriorated" since being created because of "lack of maintenance."

"Unfortunately, due to a lack of maintenance and a culture of illegal parking in those lanes, the streets have deteriorated and the bike lanes have become virtually unrecognizable over the past decade. Repaving, re-striping, and re-engineering the street will hopefully provide a fix to these issues," the coalition wrote in a blog post.

"But this plan does not address the number of vehicles parked in the Spruce and Pine bike lanes, which put cyclists, pedestrians, and motorists’ lives at risk," it added.

Here are renderings of the roadway designs and updates, via the BCGP.