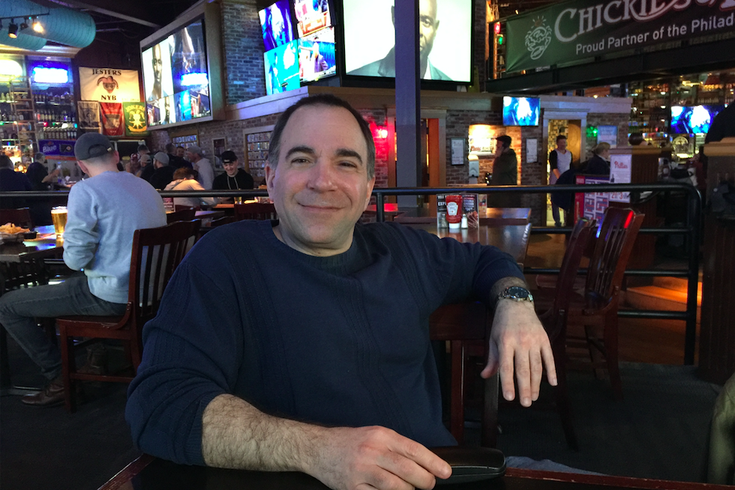 Billy Ciancaglini, a criminal defense attorney from South Philadelphia, is running for mayor as a Republican. He said he switched parties when Democrats backed sanctuary cities, the soda tax and safe injection sites, all of which he'd do away with if elected.

Billy Ciancaglini, a criminal defense attorney from South Philadelphia who prefers blunt bravado to measured niceties, didn’t initially seem all too keen on sitting down to talk about his quest to become the 100th mayor in city history.

“Sure,” he responded to an interview request. “But you’re just going to claim everyone is a ‘Nazi’ anyway.”

Those words came at a time when the single 48-year-old man with no children was being branded as such by the Unicorn Riot independent-media website and a local activist that accuse him of meeting with members of a white-supremacist organization.

"Billy For Philly" just ordered the buffalo chicken tenders inside a raucous Chickie’s and Pete’s on Packer Avenue as the Auburn Tigers fended off the New Mexico State Aggies a couple hours into the first day of March Madness.

When it quiets to the point that he can be heard, Ciancaglini hearkened back to a “petition party" earlier this month.

The event came near the end of an ugly, heated intra-party battle for the GOP nomination that broke his way when the initial endorsed nominee, Daphne Goggins, dropped out because of a lack of signatures, among other issues.

Ciancaglini bit his tongue neither during nor after that battle with Goggins who, for a short time, was the city party’s first-ever endorsed African-American woman candidate.

He didn’t think she was fit to represent the party he'd recently joined, a stance that some others labeled in online battles as racist. (As in, she and her supporters openly branded him as such; the bad blood lingers.)

“That event was a great time. I was surrounded by 100 people from all walks of life. Everybody got along,” he said, making the case that he’s not racist, either. “I’ve spent the last 16 years representing clients, 80 percent of them black and Latino, for little money, sometimes for free. None of them ever called me racist.

“People are saying these things just because I support things that they don’t. They’re trying to make me stop doing what I’m doing, and that’s not going to happen. These people spend 24 hours a day calling everybody a Nazi. Have they ever even seen a Nazi? Are Nazis around today? I could answer that idiocy every day of the week, but they’ll just keep saying it anyway. Let ‘em. Nobody listens to these people anyway.”

Gwen Snyder, the activist who launched a social media campaign against Ciancaglini since the Unicorn Riot story appeared, held firm in her belief that people are listening to these people anyway.

"The Identity Evropa leaks showed that extremist white supremacist groups have successfully infiltrated the Pennsylvania Republican party," she said. "These white supremacists bragged specifically about meeting with Billy Ciancaglini, and about his active courting of their vote.

"They marched next to known white supremacists, including a uniformed Proud Boy. ... These men and the Philadelphia and Pennsylvania Republican parties must denounce these hate groups by name and in no uncertain terms, and must condemn the white supremacist violence these groups support, including racist police violence like the shooting of Antwon Rose in 2018."

"I honestly believe I am going to win. Who knows, maybe some kind anonymous donors focused on one of those issues will come along with a big donation to help me out.” – Billy Ciancaglini

It's safe to say that Ciancaglini's correct in believing that he’ll be painted as a Trumpian candidate once city Democrats decide his opposition in November’s primary election.

Ciancaglini suspects the vote between Mayor Jim Kenney and challengers Alan Butkovitz and state Sen. Anthony Williams will break down 50 to 30 to 20 percent, respectively.

That’s fine with him. Taking on Kenney is what he wants. The only time he gets as fiery as when denying white supremacist ties and racist accusations is when he talks about the incumbent, whose policies led him to switch parties last year.

“What’s that old saying, ‘the only thing necessary for the triumph of evil is for good men to do nothing?’” he said. “That’s why I’m running. Somebody had to. The sanctuary city has to end. The ‘soda tax’ has to go. No way we should have safe injection sites.

“Jim Kenney has been an absolute nightmare for the city. He never acknowledges when he’s wrong and never apologizes. He just doubles down. Even the people down on 2nd Street think he’s an a******. He is.”

Ciancaglini’s approach is aggressive, a product of what happens when a defense attorney's demeanor meets an angry and agitated political world. But will it work in a city that last elected a Republican as mayor when Harry Truman was president?

“I honestly believe I am going to win,” he said, fully acknowledging that limited funding, staffing and campaign infrastructure make that declaration seem like a stretch even if he were to attract voters who preferred the Democratic primary also-rans. “Who knows, maybe some kind anonymous donors focused on one of those issues will come along with a big donation to help me out.”

Intimating that that scenario may already be in the works, he claimed that the majority of Philadelphians are on his side when it comes to those issues, but their voices get drowned out.

“Once the Democratic Party changed from what I agree with – the sanctuary city, the soda tax, the safe injection sites – that was it for me,” said Ciancaglini, who ran for a judicial position as a Democrat.

On the sanctuary city status: How can you defend a policy that directly resulted in a 5-year-old girl getting raped? (“I can’t believe he had the nerve to run again after that happened,” he said.)

Soda tax: Even City Council is now “figuring out what they should’ve known along if they had their finger on the pulse of the people” in trying to reverse course.

Safe-injection sites: That idea needs to end “before you or I get robbed by someone on their way to or from one of them.”

He’s fixated on those issues to the point that he already knows how he’d address them should he win.

“On day one, 10 minutes after getting inaugurated – not 15 minutes, 10 minutes – I will have ICE in my office asking them what they need from me to help them do their jobs,” he said. “The soda tax would be trickier since I’d need help from City Council, but if the right people are elected to Council, it’d be easier to get a supermajority.”

When it comes to safe-injection sites, he spends a few minutes discussing a policy proposal he’s developed that would prioritize offering rehabilitation, job training and short-term affordable housing instead.

That policy seems overly ambitious, but Ciancaglini said the services are already being offered in the city, just not in conjunction with one another.

He's asked about the Trump parallels which will likely surface should he take his brash approach into the campaign season, which he most assuredly will.

“Jim Kenney has more to do with this election than Donald Trump,” he said, noting there are “a million things” he doesn’t like about the incumbent. “Kenney is obsessed with him. It’s an unhealthy obsession. No matter what the President does, Kenney has to say the opposite. If Trump would say, ‘I don’t support the wall,’ Kenney would get rid of the sanctuary city policy just to do the opposite.”

He chided Kenney's overwrought reaction before hearing the full story behind a black doll being found hanging with a noose around its neck in a South Philadelphia playground, and the lack of an apology after the reality of the situation became clear.

“He doubled down even after being proven 100 percent incorrect,” he said. “He just can never say, ‘I made a mistake, and I apologize.’ That’s shameful. If you’re wrong, admit it. If I’m wrong, I admit it. A sincere apology makes the issue go away instantly.

“If I’m elected, and one of my policies leads to a young girl getting raped, I will resign the next day. Write that down word for word. He says he’s helped every neighborhood in Philadelphia. How did he help that child’s neighborhood? How has he helped the African-American neighborhoods with no means to go outside the city to get soda cheaper? He likes going to New York City instead of staying in Philadelphia? Well, I’ll buy him a one-way bus ticket to go there for good. One of those $10 bus tickets from Chinatown.”

He wonders aloud whether new details will emerge tying Kenney more deeply into the federal indictment recently filed against labor leader John Dougherty, City Councilman Bobby Henon and others. That would certainly help his efforts, he thinks.

He also excoriates Kenney for delaying the decision about where to move the statue of former Mayor Frank Rizzo in the name of political protection. ("The only place it'd move if I was mayor was to my front lawn," he said.)

“If he were a basketball coach who did a bad job for four years, he’d be fired. They’d need a breath of fresh air, exactly like a sports team. Jim Kenney is the city’s Chip Kelly,” he said. “Nothing good has been happening in Philadelphia lately. It’s time for change.”

He’s asked about the Trump parallels to how he conducts himself.

“I’m brash, I’m bold, I’m outspoken. So is he. But, this is just who I am. I’m not patterning myself after anybody or anything,” he said. “If you ask me a question, I’ll answer it honestly. What do I care? I've been this way my whole life.”

For now, though, he has to bide his time waiting for the Democratic primary in May. He said he'll try to get invited to debates during the next two months, so he can share his ideas more widely.

"Could you imagine me on stage with Kenney? Do you think he'd actually do that?" he asked. "I hope so. That'll be fun."

Would it be fun? In a gaper-delay sense, sure, but whether it'll happen is an altogether different prospect as Kenney's campaign spokesman, Harrison Morgan, declined to comment on Ciancaglini's remarks in this story.

"This is a man who seeks the support of neo-Nazis and white supremacists," Morgan said Friday night. "We're not even going to engage with him."