Watch: Mayor Kenney reads mean tweets to get us in Thanksgiving spirit 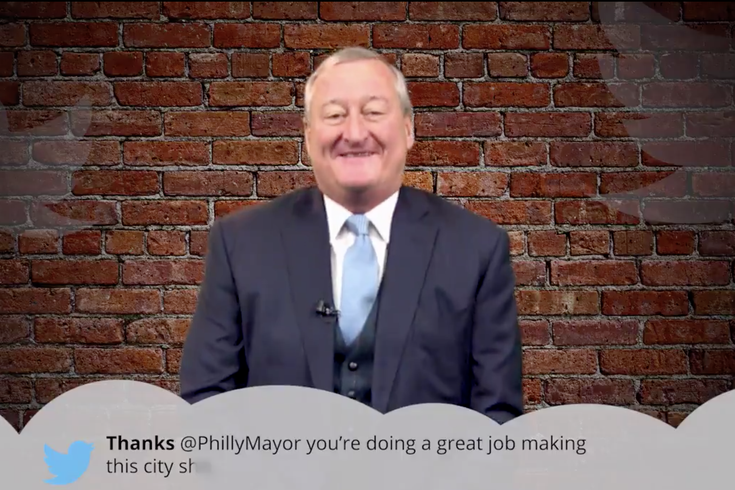 Mayor Jim Kenney laughing at the idea of Philadelphia taking a poop.

Philadelphia Mayor Jim Kenney has made reading mean tweets a semi-regular thing during his time in office. It's hard to blame him: It's easy content, and we'll always watch.

He shared a new edition Tuesday, featuring Thanksgiving-related tweets. Each one includes Twitter users “thanking” Kenney for something.

This Thanksgiving, I’m grateful to be the Mayor of this great city — and for all your tweets. pic.twitter.com/8j3ySgsHa9

That was pretty good! Kenney laughing and making a toilet joke seemed unscripted, and it was funny.

Unfortunately, the video stopped short of including handles with the original tweets.

We wanted to know who was yelling at the mayor, so we went back and found the five originals for some context:

1. The guy who called Kenney a tool is the only person, ever, to tweet “thanks for demonstrating what a complete tool you are,” which seems almost impossible:

Thanks for demonstrating what a complete tool you are by blaming the president before you had all the facts.

This tweet was in response to Kenney’s statement on the incident at Weccacoe Playground, when a black doll was found hanging from a noose.

2. The second one was from former WIP host Tony Bruno:

never have I been more ashamed to call Phila my home. Thanks to inept stooge @PhillyMayor

This tweet was in response to a video of Candace Owens and Charlie Kirk being confronted by Antifa protestors in the Gayborhood.

3. The third tweet was in response to a get out the vote post from Kenney in late September:

When the Mayoral race comes up, I will be there to vote for the other guy or gal! Thanks for the reminder our one-term mayor

It seems like Bruno spends a lot of his retirement yelling at the mayor.

5. The fifth tweet was a quote-tweet of an NBC10 breaking news item about the shooting of Philadelphia police officer Paul Sulock.

There you have it: Everyone likes to be angry online.