'People covered in blood literally ran out of their shoes and boots,' says retired casino exec

A Philadelphia-area native found herself "right in the middle of the aftermath" of one of the deadliest mass shootings in U.S. history on Sunday night. 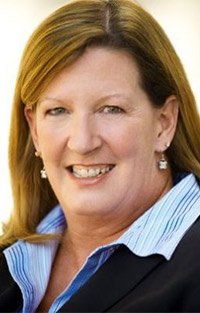 Retired gaming executive Virginia McDowell, who grew up in Abington, Montgomery County, and worked in Atlantic City, tried to comfort victims of the mass shooting at a concert in Las Vegas on Sunday night.

Virginia McDowell, a retired casino executive who worked for years in Atlantic City, was staying in a hotel on the Strip in Las Vegas adjacent to the outdoor venue where a gunman shot into the crowd at a music festival from his room on the 32nd floor of the Mandalay Bay hotel.

At least 58 victims in the Las Vegas shooting have died, and more than 200 others were wounded.

"People covered in blood literally ran out of their shoes and boots," she remembered. "Crying, shaking, frantically trying to reach loved ones.

"There was little we could do but hug people."

McDowell, who was staying in at the Tropican Las Vegas hotel, did not attend the concert and was not injured. But soon she found herself in a horrible scene.

"Many of the wounded streamed into the Trop where we are staying, and we got caught in a stampede on the casino floor when they thought there was another active shooter," she said.

But it caused a panic in the Tropicana's casino, with fearful survivors of the concert fleeing there in search of shelter "pushing over tables and chairs, tripping over each other," she recalled.

That report turned out to be false, police said.

McDowell said her most heart-wrenching experience was approaching a blood-soaked, young woman "with a 1,000-yard stare ... I asked if I could help, if she was injured. She told me, 'This is my husband's blood. He was shot.' "

According to CNN, police have located a woman who had been with the gunman, Stephen Paddock, 64, of Mesquite, Nevada, who appears to have killed himself, according to a Las Vegas sheriff. Paddock reportedly fired hundreds rounds into the concert crowd.

McDowell said she and her husband, Michael Wendorf, "comforted many people in shock – we saw a lot of blood."

Her most heart-wrenching experience was approaching a blood-soaked, young woman "with a 1,000-yard stare."

"I asked if I could help, if she was injured. She told me, 'This is my husband's blood. He was shot.'"

McDowell tried to hail a cab to take the woman to a hospital where her husband was taken, but that's when Trop employees came streaming out of the building with many wounded in office chairs looking for transport to hospitals.

The wounded vastly outnumbered available ambulances so they were put in taxis and police cars for transport, she added.

"We arrived back at the hotel with the first round of first responders arriving on the scene and the terrified folks from the concert running into the Trop for safety," she recalled."All hell broke loose."

A couple crowded their way into her cab and told McDowell and her husband that they would pay the cab fare because they were so in a rush to flee and did not want to wait.

Others with Philadelphia ties were in Vegas and in the vicinity of the shooting.

South Philadelphia lawyer Billy Ciancaglini, on vacation with a group of Philly friends, was walking by the Tropicana when he saw groups of people running toward him. They started shouting at him to turn around and that's when he heard "pop, pop, pop. Like firecrackers."

"I had a wonderful day. I'm in Las Vegas. I just had a lobster dinner. The Eagles won. The Cowboys lost," he said. "And then in a moment... I didn't know where the bullets were coming from and all it takes is one."

He retreated quickly, dodging vehicles speeding along the Strip and running over curbs – "they didn't care about the traffic lights"  – first to MGM, and then the Monte Carlo, about eight blocks away, where he was staying. The shooting took place at the southern end of the strip, near McCarran International Airport.

"It was surreal. I had TV on in my room. The news was covering something right outside my window! I could look at the TV and see Mandalay and then turn my head and see the same scene. Surreal. That's the best word for it," said Ciancaglini.

Another Philadelphian and his family were at the concert, according to a Reuters report.

Mike McGarry, 53, a financial adviser, told the news agency that he threw himself on top of his children as shots rang out. “They’re 20. I’m 53. I lived a good life,” McGarry said. His shirt had foot marks from people who stepped over him in the crush to flee.

'THAT COULD HAVE EASILY BEEN US'

McDowell and her husband had been out for dinner with another couple and they returned to the Trop in a cab to find panicked drivers jumping curbs and people swarming away. Meanwhile, emergency vehicles flooded in, using both lanes."

"We were seeing the walking wounded. Many with blood on them, some wounded, others in shock. Grown men were standing there, tears streaming down their face," she added.

She confirmed what had happened via the Las Vegas' police Twitter account. She said social media was both useful in spreading information and distributing rumors and disinformation.

"We heard heroic stories, of men covering other people with their bodies, carrying the wounded away fireman-style.

"I talked to one man. The woman on one side of him got shot in the leg and she fell. He kept telling her to stay down. A woman to the other side of him stood up and was shot. She ran away and he carried the other woman away to safety," recalled McDowell. "It's absolutely horrible, but what people did for each other, they did everything they could."

"That could easily have been us," she added. "We're country music fans and we've seen Jason Aldean. We could have been at the concert."

Instead McDowell and her husband were safe back in their room, "but still shaking."

McDowell grew up in Abington, Montgomery County, and then went to Temple University. She worked for years at the Trop in Atlantic City before moving to the Isle of Capri Casinos in Missouri.

She returns to Atlantic City often, most recently for a memorial to Jim Whelan, the city's former mayor and a state senator at the time of his death.

She was in Las Vegas to oversee a conference Monday aimed at women in gaming as an adjunct to the Global Gaming Expo.

"The conference will go on," she said. "But I'm not sure anyone will be listening."