The Hulu original is a variation of 'The Purge' 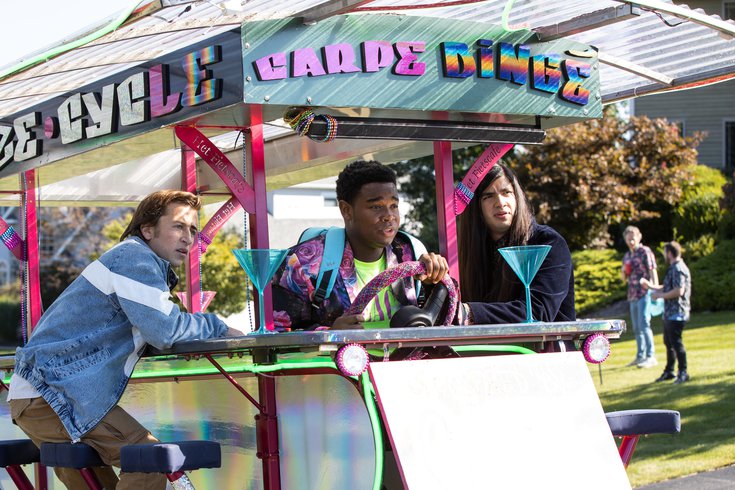 'The Binge' is set at a time when all drugs and alcohol are illegal. The only day anyone can participate in the 'fun' is on Binge day. Main characters Griffin (Skyler Gisondo), Hags (Dexter Darden) and Andrew (Eduardo Franco) are pictured above.

"The Binge," a Hulu original, is like a comedic "The Purge." Instead of portraying a near-future America where all crimes, including murder, are legal for one day only, this new flick centers on a time when all drugs and alcohol are illegal and the only day anyone can participate in the mind-altering substances is on Binge Day.

Skyler Gisondo, of the comedy-horror series "Santa Clarita Diet" (RIP) and coming-of-age movie "Booksmart," stars in the film as 18-year-old Griffin, alongside Dexter Darden and Eduardo Franco, who play his friends.

Vince Vaughn also is on board as the school principal and rocks a pretty impressive 'stache for the role.

The new movie will debut on Hulu on Friday, Aug. 28. "The Binge" is directed by Jeremy Garelick, who produced the recent Hulu comedy "Big Time Adolescence."

A trailer for the rowdy teen comedy dropped Tuesday afternoon and overall, the movie looks to be pretty funny in addition to having a group of charismatic actors. You can check it out for yourself below.

While it's hard to tell if "The Binge" will be as wildly popular as "Palm Springs," which became Hulu's most-watched original film just three days after debuting, we're guessing it has a good chance.

With parties and large gatherings a no-go because of COVID-19, it's hard to look away from the massive crowds of people shown in the trailer. They're all so close together and that's terrifying, but it also offers a form of escapism from our current situation.