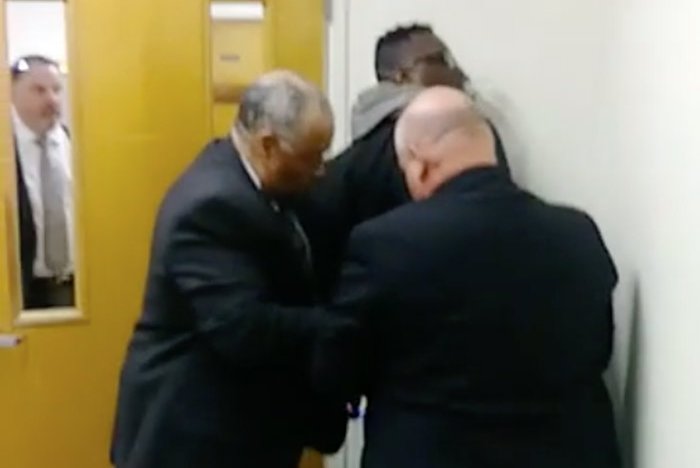 “We want to know why the investigation is taking so f***ing long. Open the door. We want answers.”

Those were the some of the choice words that Black Lives Matter Pennsylvania activist Asa Khalif bellowed inside state Attorney General Josh Shapiro’s Philadelphia office on Monday in the moments before a two-man protest turned into one man's arrest.

Back in August, the AG’s office announced it would investigate the case of David Jones, who was fatally shot by Philadelphia police Officer Ryan Pownall on June 8.

The shooting came after Jones was stopped for illegally driving his dirt bike “in a reckless manner” near Whitaker and Hunting Park avenues.

On Monday, Khalif and Ikey Raw – aka Isaac Gardner of the Coalition for Justice for David Jones – went to the AG’s office on South 12th Street to demand “answers.”

As Raw livestreamed the protest on Facebook, he captured a confrontation that saw Khalif get arrested after he allegedly pushed out a door window during the tense exchange.

Be warned: the full video – which you can see below – contains a lot of profanity.

After being released from custody early Tuesday morning, Khalif spoke to PhillyVoice about the arrest, his time in custody and the underlying issues that led to both.

He prefaced the conversation by noting that it wasn’t supposed to go down the way it did.

“I swear to God this was not planned. I was planning to go to the Meek Mill (protests) but it didn’t pan out that way,” he said. “But, we have to keep pressure on the attorney general in this case.

"They need to get more cuffs, because these protests are going to continue." – Asa Khalif, BLM Pennsylvania

“There is a history in Philadelphia with rumors (of these sorts of cases) being put on the back burner or already being decided. Those rumors have always plagued our community.”

In this case, Khalif maintained, the whispers hold that investigators have completed their probe and will announce the findings when people are distracted by the holidays and not paying close attention to the news.

“They think we love Jesus so much that we’ll just forget about justice during the holidays, but people are starting to get organized,” he said. “We’re going to respond. We’re not getting so caught up in Thanksgiving and Christmas that we’ll just ignore the history of (police) shooting people in Philadelphia.”

From the attorney general’s standpoint, spokesman Joe Grace said the arrest came after Khalif was seen “damaging a door and exhibiting unacceptable and threatening behavior in the Office of Attorney General.”

Grace confirmed that the Jones case remains under investigation after a “conflict referral” from the city District Attorney’s Office. He said no announcements will be made until the investigation has concluded.

“We take this investigation seriously, appreciate its importance to the community, and are conducting a thorough review of the facts and the law,” Grace said. “The Office of Attorney General offered to meet this Fall with members of the Justice for David Jones Coalition to explain the process.”

"Those protests cross a line, however, when property is destroyed and individuals engage in threatening behavior.” – Joe Grace, spokesman for Attorney General Josh Shapiro

Since Shapiro was in Harrisburg on Monday, Grace said Khalif was advised he needed to schedule an appointment.

“He refused to do so. Mr. Khalif then cursed repeatedly and pushed out a window panel of a security card access door. Philadelphia police subsequently took Mr. Khalif into custody,” he said. “The Attorney General strongly supports and protects the right to protest.

"Those protests cross a line, however, when property is destroyed and individuals engage in threatening behavior.”

HIS TIME IN CUSTODY

Khalif said he was taken away in a paddy wagon that stopped at a couple of “undisclosed locations that I couldn’t identify” before arriving at the Ninth District in Fairmount where he’d remain until 5 a.m. Tuesday.

“Each time they gave me a sandwich, I balled it up and threw it in the trash. I didn’t drink anything. I was in the custody of my oppressors. Many black or brown people don’t necessarily come out whole, or at all. This is not for show.”

He noted that a few people from the Meek Mill protest outside the Criminal Justice Center came over to the Ninth to make sure police knew that they knew he was there.

He said the video clearly captured the fact that “I was not resisting arrest” and contested the window-related charges on the ground that it was a shoddily installed pane of glass that fell out during the conflict.

“The bottom line is this: I was incarcerated for a period of time that was longer than the (officer) who shot and killed someone. They are arresting protesters for holding politicians to a standard of transparency that they promised they would abide by,” Khalif said. “A murderer gets to go home for dinner and the protester gets a cheese sandwich in jail.

“That says a lot about our current DA who refused to prosecute and a cowardly lion attorney general playing these games while a black man is still dead. They need to get more cuffs, because these protests are going to continue.”