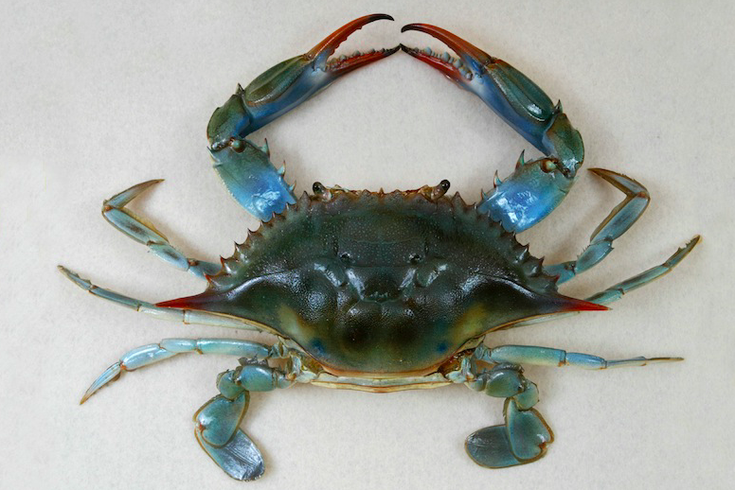 A female Atlantic Blue Crab (Callinectes sapidus) in the permanent collection of The Children’s Museum of Indianapolis.

The blue crab is one of the Mid-Atlantic's seafood hallmarks, a staple of Chesapeake Bay ecosystem and a prominent fixture in New Jersey.

Identified by its distinctive blue claws, the crab has now become entrenched along the coast of Spain — and not in a good way, according to a report from The Guardian.

Marine researchers in the Mediterranean are lamenting the arrival of the blue crab, which was first spotted in the Ebro Delta region in 2012. Nearly seven years later, it's become an invasive species.

“It devours everything, and the catch of local crabs and cockles has fallen as a result,” Joan Balagué, head of the fisherman’s association in Sant Carles de la Ràpita on the Ebro Delta, told The Guardian.

Specialists at the Marine Research Centre at the University of Alicante said they suspect the blue crab arrived in Spain via the ballast tanks of commercial ships. When those tanks are discharged of water at their destinations, they often carry foreign species into new territories.

The Mediterranean has proven to be fertile ground for the blue crab, which thrives in environments with accessible fresh and salt water. The females can produce up to two million eggs per brood.

With few predators on the Spanish coast, the crabs have taken over the area in recent years, feasting on prawn and other mollusks as they continue to proliferate. The essentially have become the only catch as local crabs and cockles become depleted.

Wildlife management experts in the area don't believe eradication of the blue crab is going to be feasible. Most likely, they'll become a primary catch and a staple of the regional diet in the Ebro Delta.

Ironically, just as the Mediterranean coasts in Spain and Tunisia have a had a blue crab boom, the Chesapeake Bay has been waging a campaign to revive the popular crustacean. Crabbers there have produced reduced harvests since the turn of the century.