The author will be at the Free Library Nov. 1 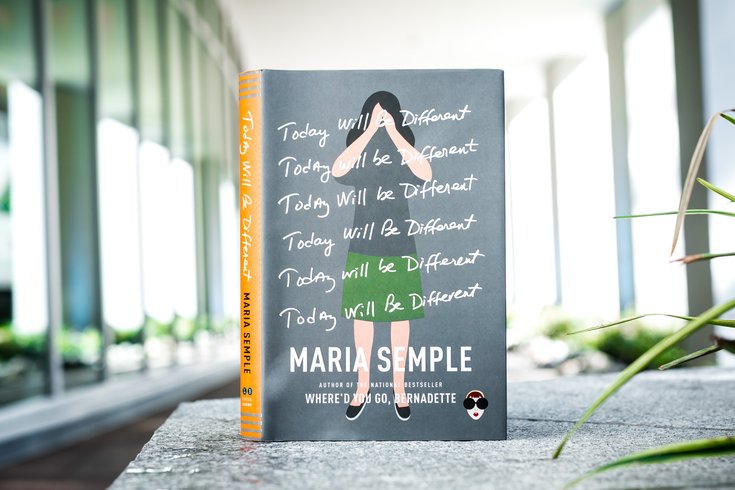 "Today Will Be Different," a novel by Maria Semple.

"Today Will Be Different," the new novel by "Where'd You Go, Bernadette?" author Maria Semple, explores a day in the life of the comically neurotic Eleanor Flood.

"Today there will be an ease about me. My face will be relaxed, its resting place a smile," she tells herself. "Today I will radiate calm. Kindness and self-control will abound."

Of course, Semple is about to throw all kinds of obstacles in Eleanor's way. Possibly (probably) there will be a blackberry bush incident, because this book takes place in the same Seattle world where Bernadette lived. Eleanor's son Timby even attends the ridiculous Galer Street School.

First up, her husband Joe, a respected hand surgeon and team doctor for the Seattle Hawks, is sitting with his face down on the kitchen table in a look of pure defeat. Eleanor ignores him.

Then, Galer calls to say Timby has a stomachache (again) and she has to come collect him. Quick fix: Take him to the doctor, prove he's fine, bring him back to school. Only, the doctor thinks Timby needs some mom time.

With Timby in tow, Eleanor's day begins to spiral. Joe isn't at his office like he said he was; he told the staff that he and the family were going on vacation for a week.

She thought she planned lunch with frenemy Sydney Madsen, but it turns out she booked it with a blast from the past named Spencer Martell, who soon offers up the first laugh-out-loud moment. Eleanor and Timby sit across from him as he recounts his time working for, and being fired from, Eleanor's old animated TV show, "Looper Wash."

"I spent my last dollar on a painting at a thrift shop just for the canvas, painted it green, and while the paint was still wet, cried into it."

Suddenly, Spencer is wrapped up in Eleanor's day just like Timby. Her new goals: Stop thinking about the past and find out what Joe is up to.

The main action may take place over the course of a single day, but that doesn't mean Semple isn't up for a bit of time travel. Spencer's reappearance brings up old memories of Ivy — her sister who lives a strange life in some elite pocket of New Orleans — and Eleanor's childhood.

Those who loved the use of emails, FBI reports and documents in "Where'd You Go, Bernadette?"will be happy to explore Semple's use of full-page illustrations to explain the Ivy-Eleanor relationship.

While both "Bernadette?" and "Today Will Be Different" are hilarious and heartwarming, in Semple's latest, the laughs come a little easier and a soft spot for the wacky one-woman show grows a little quicker. The reason is that Eleanor's problems are easier to swallow, and while the ridiculousness is laid on thick, there's heart and soul behind it.

In the end, all loose ends feel tied up and readers should be satisfied. That said, one day inside Eleanor Flood's head hardly seems like enough. Give us two days, a week, a month.

Maria Semple will be at the Free Library's Parkway Central branch on Nov. 1 at 7:30 p.m. The author event is free to attend.