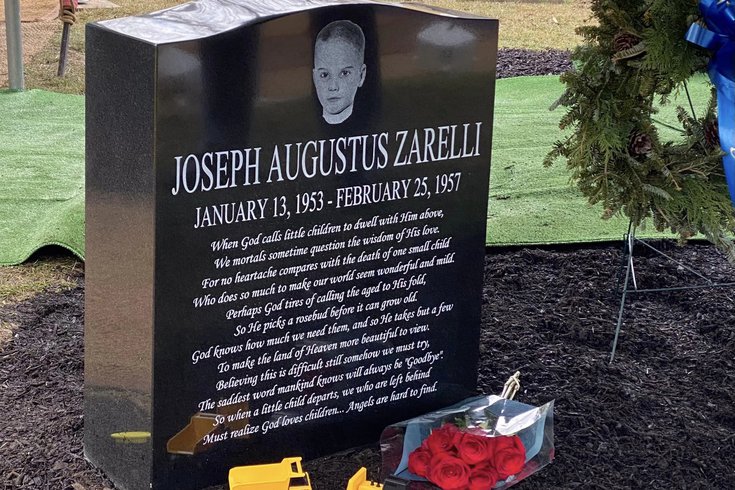 A new headstone was unveiled at a Friday service for Joseph Augustus Zarelli, the child long known as the 'Boy in the Box' after his beaten body was found in a Fox Chase field in 1957. Efforts to identify his killer continue to this day.

A month after Philadelphia police identified the child at the center of the city's most notorious cold case, Joseph Augustus Zarelli now has a new gravestone bearing his name at the Ivy Hill Cemetery.

Long known as the "Boy in the Box" and "America's Unknown Child," Zarelli's identity was finally revealed in December thanks to the use of forensic genetic genealogy, an advanced form of DNA analysis that has renewed hope in cold cases around the world.

The 4-year-old boy, who police say was from West Philly, was found dead in Fox Chase on Feb. 25, 1957. His nude body was discovered in a cardboard carton in the formerly rural area of Susquehanna Road, between Verree and Pine roads. Zarelli was wrapped in a tattered green blanket, with his arms carefully folded over his stomach, and showed signs of malnourishment and physical abuse. His autopsy determined he died from a severe blow to the head.

Generations of investigators have searched for answers about Zarelli's mysterious death, taking the case to the national spotlight with features on "America's Most Wanted," but the homicide has gone unsolved for decades.

On Friday, to mark what would have been Zarelli's 70th birthday, an interfaith service was held at the Ivy Hill Cemetery to dedicate the new headstone. People who attended brought a wreath, birthday balloons, cards, flowers and toys.

The service was organized by the Philadelphia-based Vidocq Society, a group of retired detectives who have continued to work on the cold case. The new monument and engravings were provided by DeChristopher Memorials, with help from Ivy Hill Cemetery.

It was a lovely ceremony attended by more people than we’ve ever seen at his gravesite. Many active and retired...

Zarelli originally was buried in July 1957 in a potter's field near Mechanicsville and Dunks Ferry roads in Northeast Philly. His first headstone read, "Heavenly Father, Bless This Unknown Boy." When his body was first exhumed in 1998, the gravesite was moved to Ivy Hill Cemetery with a new headstone that said, "America's Unknown Child," and had a carving of a lamb on it.

The new headstone features a photo of Zarelli at the top with his full name and the text of the poem "Little Angels" engraved below:

When God calls little children to dwell with Him above,
We mortals sometimes question the wisdom of His love.
For no heartache compares with the death of one small child
Who does so much to make our world seem wonderful and mild.
Perhaps God tires of calling the aged to His fold,
So he picks a rosebud before it can grow old.
God knows how much we need them, and so He takes but a few
To make the land of Heaven more beautiful to view.
Believing this is difficult still somehow we must try,
The saddest word mankind knows will always be "Goodbye."
So when a child departs, we who are left behind
Must realize God loves children ... Angels are hard to find.

Zarelli's body was exhumed a second time by court order in 2019, enabling investigators to collect another DNA sample that led to his identification.

"This was the most challenging case of my whole career. It took 2 1/2 years to get the DNA in shape — it was so bad — to get to the point where we could create snip data that we could use for genealogy," Colleen Fitzpatrick, president of Identifinders International, said at last month's announcement.

Based on the DNA analysis, detectives located relatives on Zarelli's maternal side and established the identity of his birth mother. From there, they obtained birth records for all children born to the woman between 1954 and 1956. They found three results, including birth certificates for two siblings who were previously known to investigators, police said.

Zarelli's birth certificate included information about the boy's father, which enabled detectives to make contact with living paternal relatives and identify Zarelli's dad. Both of Zarelli's parents are deceased, but police are working with surviving relatives to try to move the case forward.

Philadelphia police Capt. Jason Smith, commanding officer of the homicide unit, said investigators believe they're on the right track. He declined to get into specifics.

"We have our suspicions as to who may be responsible, but it would be irresponsible of me to share these suspicions, as this remains an active and ongoing criminal investigation," Smith said last month.