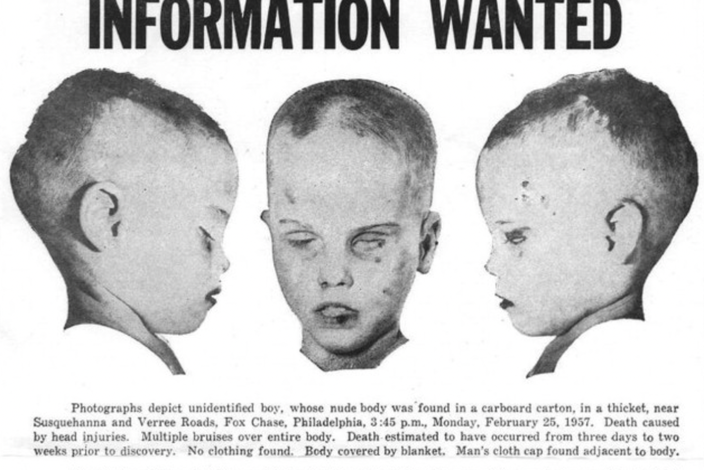 The body of Joseph Augustus Zarelli was found in a cardboard box in Northeast Philly on Feb. 25, 1957. His identity was unknown for 65 years and he was widely referred to as the 'Boy in the Box' until police reveled Thursday who he was. The images above are from a poster police circulated after Zarelli's remains were found.

Investigators identified Joseph Anthony Zarelli as the victim in Philadelphia's unsolved "Boy in the Box" homicide case from 1957. The child was 4 years old at the time, and he was beaten to death and left in a field in Northeast Philly, police said Thursday during the briefing when they revealed Zarelli's identity.

The boy's identity was determined using forensic genetic genealogy, a modern technology that has led to breakthroughs in cold-case investigations worldwide.

"The science and technology that were instrumental in the identification of this child, one of our oldest unsolved homicides, gives me hope that we can continue to identify unknown victims of crime, and that no one will ever again have to wait this long for their name and the story of their life to be told," Philadelphia Police Commissioner Danielle Outlaw said.

She added, "This is still an active homicide investigation and we still need the public's help."

RELATED: Who is the 'Boy in the Box?' A look back at the efforts to solve the 1957 homicide in Northeast Philly

Zarelli, who police now say was from West Philly, was found dead in Fox Chase on Feb. 25, 1957. His nude body was discovered in a cardboard carton in the formerly rural area of Susquehanna Road, between Verree and Pine roads. The boy was wrapped in a tattered green blanket, with his arms carefully folded over his stomach, and showed signs of malnourishment and physical abuse. An autopsy determined he died from a severe blow to the head.

Zarelli came to be called "America's Unknown Child" as authorities pursued countless leads over the decades that failed to identify him or the person who killed him.

At various points in the case, investigators unsuccessfully attempted to identify Zarelli using fingerprints, hair fibers, X-rays and previously obtained DNA samples, which had been placed on a national database managed by the FBI in hopes of finding a biological relative.

Zarelli's body was exhumed twice — once in 1998 and again, by court order, in 2019 — to collect more DNA from his remains. The sample collected in 2019 ultimately enabled California-based Identifinders International to confirm Zarelli's identity in partnership with investigators.

"This was the most challenging case of my whole career. It took two-and-a-half years to get the DNA in shape — it was so bad — to get to the point where we could create snip data that we could use for genealogy," said Colleen Fitzpatrick, president of Identifinders International.

By interpreting the DNA, detectives were able to locate relatives on the child's maternal side and establish the identity of the birth mother. From there, they obtained birth records for all children born to that woman between 1954-1956. They found three results, including birth certificates for two siblings who were previously known to investigators, police said.

The third result was a birth certificate for Zarelli, who was born on Jan. 13, 1953. He was never issued a Social Security Number. The birth certificate included information about the boy's father, which enabled detectives to make contact with living paternal relatives and identify Zarelli's dad.

"It's the genealogical connections. When we look at the data, we see what we call matches or 'DNA cousins,'" Fitzpatrick said. "We network them, and there were cousins on both sides of the family that can only funnel to that one individual, can only be connected to that one guy. That's how we identfied the parents, the family and so on."

Both of Zarelli's parents are deceased, police said, declining to identify them.

"At this point in time, we are not going to be releasing that information," Capt. Jason Smith, commanding officer of PPD's homicide unit, said. "Joseph has a number of siblings on both the mother and father's side who are living, and it is out of respect for them that their parents' information remain confidential."

Smith said police will be going back to surviving family members as part of the ongoing investigation. He declined to say whether they live in the Philadelphia area, but said some of them were already known to investigators.

At the time of Zarelli's death in 1957, he was living in the area of 61st and Market streets, police said.

Given the publicity that the case received at the time and ever since, police are unsure why no one from the family or Zarelli's neighborhood came forward with information. It's unclear how long Zarelli had been living in West Philly.

"I don't know what the neighbors knew or didn't know," Smith said. "The child did live past the age of four years old, so there would have been somebody out there that would have seen this child, perhaps another family member that hasn't stepped forward, possibly a neighbor that remembers seeing that child, and remembers whatever was occurring at that particular household."

Smith did not go into specifics about the current state of the homicide investigation.

"We have our suspicions as to who may be responsible, but it would be irresponsible of me to share these suspicions, as this remains an active and ongoing criminal investigation," Smith said.

Police still have some clothing collected from the original crime scene and hope to use the same DNA technology to glean new information. Police are relying on help from the public to advance the case.

"One of the things I'm hoping comes out of this press conference is that we receive an avalanche of tips from the public," Smith said. "We're going to filter through each and every one of those tips, but in that avalanche, there might be a diamond in the rough. I'm hopeful that there's somebody who's in their mid- to late seventies, possibly eighties, who remembers that child."

Zarelli's remains, originally buried in Northeast Philadelphia in 1957, were later moved to Ivy Hill Cemetery in Cedarbrook. For years, the boy's headstone has been engraved with the words, "America's Unknown Child," but it will now be amended to include his name.

"Now our lad is no longer the 'Boy in the Box,'" said William Fleisher, a former Philadelphia police officer and FBI agent, who now works with the Vidocq Society, a longtime partner in this case. "He has a name, and I was raised to believe that when you say the name out loud of a loved one, that person still lives in spirit amongst us."

The identification of Zarelli marks the first time Philadelphia's Office of Forensic Science has been able to confirm an identity through its forensic genetic genealogy program. Police are working on dozens of other cases involving missing and unknown people that may be advanced by this technology.

"While this is the first, it will definitely not be the last identification that is made," said Ryan Gallagher, assistant director of the Philadelphia Office of Forensic Science. "Our goal for the project is that there will never be another unidentified homicide victim in the city of Philadelphia."

Fitzpatrick said the technology continues to evolve and that genealogists are learning more about how to refine their use of it with each case.

"We've solved cases in two hours and we've solved cases in three years ... this is a brand new technology as of 2017-18, so the oldest cases you're going to find are two or three years that haven't been solved," Fitzpatrick said. "But as the databases grow and our tools develop, and we go forward with the technology, there's going to be a lot more. It's going to go a lot more quickly."