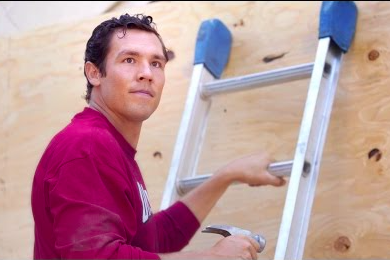 With a hurricane bearing down on the Heisman House, Sam Bradford isn’t taking any chances. Then it shows up in a GT-R.

Earlier this week, PhillyVoice Eagles writer Jimmy Kempski entertained the hypothetical of whether the Eagles would be interested in pursuing Redskins quarterback Robert Griffin III after the former No. 2-overall pick was given a backup role in Washington.

If Griffin has any designs to befriend the Eagles organization and work his way into a QB competition, where anything could happen to fellow wounded knee warrior Sam Bradford, the commercial just released by Nissan as part of its Heisman House series suggests RG III is a wily type.

The responsible, earnest Bradford, upon getting word of a hurricane approaching the Heisman House, breaks out the toolbelt to board up all the windows. Then former Miami Hurricane Vinny Testaverde shows up. Bradford freezes and turns to find RGIII and former South Carolina running back George Rogers laughing at him in the distance. Clearly, the mischievous duo did not mean a real hurricane, so an irate Sam chucks his tools at them.

The entire series, which can be found at Nissan's ESPN promo site, features some pretty funny scenarios among college and pro legends, including the most recent Heisman winner, Marcus Mariota.

Sam Bradford will sit out the Eagles final preseason game Thursday night against the Jets, but in case you need to stay hyped for the regular season, check out the video below and enjoy the beauty of all of Bradford's completions against the Packers last weekend in gif form.