Bradley Cooper, Lady Gaga sing in new trailer for 'A Star is Born' 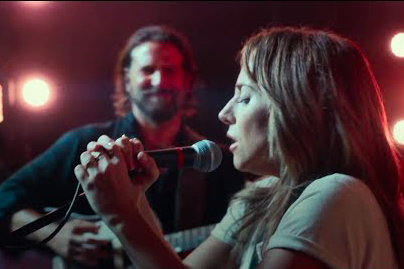 Bradley Cooper and Lady Gaga share the stage in "A Star is Born."

The long-awaited directorial debut from Bradley Cooper, a remake of the 1937 classic "A Star is Born," is only four months away from hitting the big screen.

RELATED ARTICLE: Whatever happened to that Kevin Hart movie that filmed in Philly last year?

At various points in its development, Cooper's film appeared to be stalled or in trouble. After Beyonce initially accepted and then declined the female lead, Cooper turned to Stefani Germanotta, a/k/a Lady Gaga, to inject some excitement into a movie that's now on its fourth remake.

On Wednesday, Warner Bros. released the first trailer for "A Star is Born," where we hear Cooper in a singing role for the first time. Germanotta and Cooper – who became a father last year – had a friendly deal to teach each other how to master each other's craft for their roles. They collaborated to write the film's music with help from Lukas Nelson, Jason Isbell and Mark Ronson.

In its original incarnation, "A Star is Born" told the story of a floundering actor who helps a rising actress achieve stardom as he plunges into alcoholism. The film was famously remade in 1954 with Judy Garland and James Mason, followed by a third production in 1976 featuring Kris Kristofferson and Barbra Streisand.

The Jenkintown native's remake takes a musical turn, as described in the official synopsis:

In this new take on the tragic love story, Cooper plays seasoned musician Jackson Maine, who discovers — and falls in love with — struggling artist Ally. She has just about given up on her dream to make it big as a singer… until Jack coaxes her into the spotlight. But even as Ally’s career takes off, the personal side of their relationship is breaking down, as Jack fights an ongoing battle with his own internal demons.

The cast of "A Star is Born" also includes Andrew Dice Clay and Dave Chapelle.

"A Star is Born" premieres in theaters Oct. 5.