The Royal Rumble is coming back to Philly in 2018 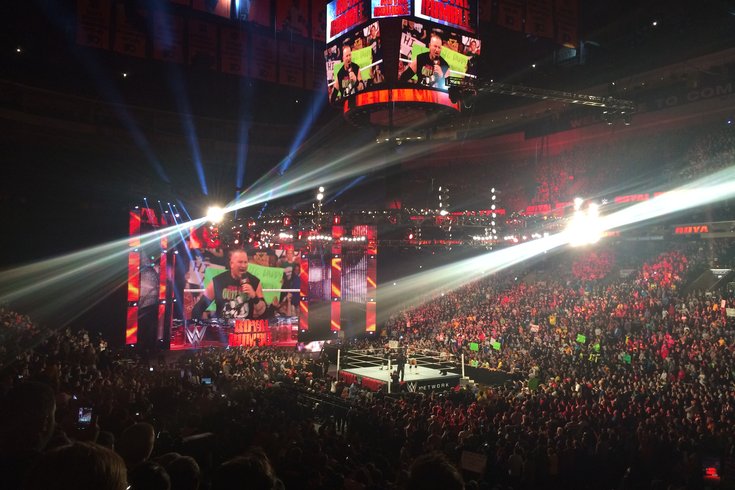 The scene from the Royal Rumble at Wells Fargo Center.

Philadelphia last hosted one of wrestling’s marquee events, the Royal Rumble, in January 2015. The Rock made a surprise appearance, and everybody went crazy. Roman Reigns eventually won, and everybody booed:

As is turns out, we’re not going to have to wait long at all see another Royal Rumble at the Wells Fargo Center. WWE announced that the event will be back in Philly in 2018:

WWE has announced that the Wells Fargo Center in Philadelphia will host the 30th anniversary of WWE Royal Rumble on Sunday, Jan. 28, 2018. The story was first reported by Philly.com.

As part of Royal Rumble Weekend, WWE will host four consecutive action-packed nights at Wells Fargo Center, including NXT TakeOver on Saturday, Jan. 27, 2018; WWE Royal Rumble on Sunday, Jan. 28, 2018; WWE Monday Night Raw on Monday, Jan. 29, 2018; and WWE SmackDown LIVE on Tuesday, Jan. 30, 2018. Additional information about these events will be announced in the future at wwe.com.

Credit to Philly.com’s Vaughn Johnson, who had the news first. Here is what John Saboor, WWE’s executive vice president of special events told him about the decision:

“WWE has enjoyed a very special relationship with the city and its fans over decades, and that important heritage made Philadelphia a very natural choice to host this unprecedented four-night celebration. Our decision to place next year’s Royal Rumble celebration in Philadelphia is truly another exciting and important step in the continued growth of WWE’s four largest annual events.”

Ticket information for the Royal Rumble will be announced soon.