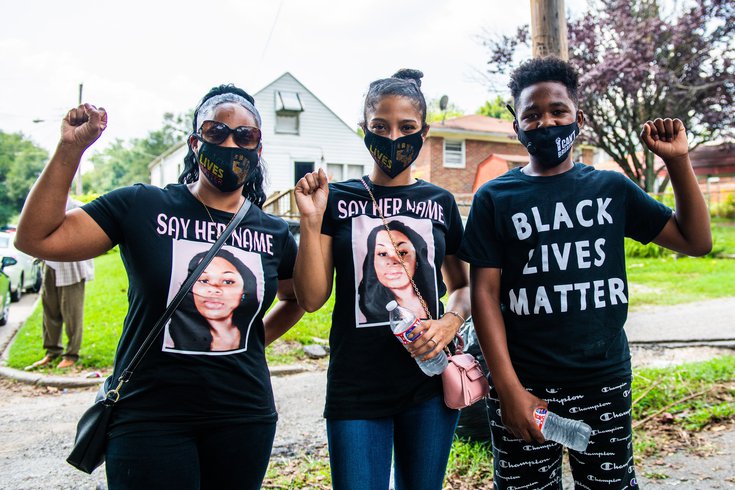 Philadelphia officials anticipate demonstrations in the city in response to a Kentucky grand jury's Sept. 23 decision to charge one officer in the fatal shooting of Breonna Taylor. The file photo above shows protestors demonstrating on the final day of BreonnaCon, the 'Day of Action' on Aug. 25, 2020 in Louisville, Kentucky.

A Kentucky grand jury decided Wednesday to file charges against just one former Louisville police officer involved in the fatal shooting that killed Breonna Taylor in March, disappointing many who viewed the case as a clear-cut example of racial injustice and police violence.

Philadelphia protesters took to the streets in Center City on Wednesday night to march for Taylor.

#Philly begins to protest following the news on the police officer that killed #breonnataylor https://t.co/XeCgGzJ5vB pic.twitter.com/L19amuUB9M

The Philadelphia Police Department and city officials said Wednesday afternoon that they anticipated demonstrations in the hours after the news out of Kentucky.

“I know that many Philadelphians are feeling disappointed, frustrated, and even outraged, following today’s announcement by Kentucky Attorney General Daniel Cameron,” Philadelphia Mayor Jim Kenney said. “The City of Philadelphia fully supports the First Amendment rights of our residents, but we also want to ensure that any demonstration activity that happens is done in a safe, lawful manner. We are not aware of any specific threats of violence or looting, but we are sharing guidance to help businesses be prepared in case the situation escalates.”

Taylor, a 26-year-old Black woman who worked as an EMT, was shot and killed by police on March 13 after three officers entered her home using a no-knock search warrant as part of a narcotics investigation. The warrant was connected to a suspect who didn't live at Taylor's property. No drugs were ultimately found at the home.

In the confusion of the situation, Taylor's boyfriend Kenneth Walker, mistook the police for intruders and fired a shot that struck one of the officers in the leg.

The Louisville police responded by firing 20 shots, striking Taylor five times. Her death became one of the focal points of widespread protests for social justice following the police killing of George Floyd in Minneapolis, which happened in May and sparked civil unrest for weeks across the country.

Former Louisville police officer Brett Hankison, who was fired in the wake of the shooting, was charged Wednesday with three counts of wanton endangerment. If convicted, each charge carries a penalty of one to five years in prison. The maximum Hankison could serve is 15 years if the sentences are strung together consecutively.

Two other officers, Sgt. John Mattingly and Detective Myles Cosgrove, were not charged in the incident.  Taylor's family received a $12 million settlement from the city of Louisville last week, along with promises of police reform, including an end to no-knock warrants.

In Louisville, where a 9 p.m. curfew was set ahead of expected protests, two police offers were shot and suffered non-life-threatening injuries, according to the Louisville Courier-Journal. A suspect has reportedly been taken into custody.

Philadelphia police have increased officer presence in Center City and in surrounding commercial areas and key locations. Drivers should expect some delays in the area surrounding City Hall.

Officials are not recommending that businesses close for the night or board up doors and windows, but the following steps have been encouraged:

• Bring signs, flags, flower pots or any other non-fixed objects inside.

• Keep the property well-lit when the business is closed.

• If security cameras are installed, make sure they are in working order and you have data storage available before leaving the property; windows, doors and any access points should be visible to the cameras.

If vandalism appears imminent, business owners are encouraged to secure their property as best and safely as possible. If businesses see vandalism in progress, they should call 911.