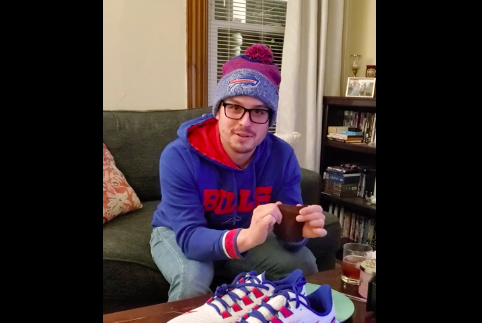 Buffalo Bills fan Ernest Cedillo sat down for a meal of boiled leather, the price he agreed to pay for betting against Eagles quarterback Jalen Hurts in a December game against the New Orleans Saints.

When people use the expression "putting your foot in your mouth," it's usually understood to be a metaphor. This is something no one other than perhaps Rex Ryan or a fan of the Buffalo Bills could get confused.

You can understand why, based on the history of Bills Mafia jumping through flaming tables.

But Bills fans have a special kinship with Eagles fans, in that the insanity level of their devotion is roughly equal, with a slight edge going to Buffalo. It's got to be proportional to the starvation from glory. Philly fans punch police horses, eat their s*** and run into pillars, so.

Before the end of the Eagles' disastrous 2020 season, a boastful Bills fan claimed on Reddit that he would literally eat a shoe if Jalen Hurts could lead Philly to a win over the New Orleans Saints. It wasn't very likely, but Hurts got the job done, earning the Eagles a 24-21 victory.

Most people would probably slink away quietly and never turn up around Eagles Reddit again. But Ernesto Cedillo owned his foolish bet and tried to convert it into social good. He wrote on Reddit last month:

Before kick off yesterday, I dared to besmirch the abilities of one Jalen Hurts and BOLDLY declared that I would consume a shoe if the Eagles somehow pulled off the victory. Well you know how that one played out.

Jokes were made at my expense by all that witnessed my proclamation. Nobody expected me to hold myself to my word. That's an insane thing to do, right?

Well, I'm here to say I will keep my word. After all, that's all a man has. But I need all of your help.

I am willing to do this on live stream, if you help me reach my stretch goal of $500 in donations to the Muscular Dystrophy Association. This is a charity that is near and dear to me and my family. My 11 year old nephew has Duchennes type so your donation will help fund research to save him and other children who will come after him.

On Friday, Mr. Cedillo released a 7-minute video of him consuming a piece of boiled leather dipped in A1 sauce. Apparently, this was filmed during the Eagles' week 16 loss against the Dallas Cowboys.

"This is all for a good cause," Cedillo says in the video. "As much as I hate myself right now, I want you to know that."

As promised, I ate a shoe. It was not good but I survived. Go Bills. from r/eagles

Cedillo has raised at least $781 for the Muscular Dystrophy Association as of Friday afternoon. At least something good came out of this.

The red-hot Bills, who are currently tied for the third best odds to win the Super Bowl according to TheLines.com, will take on the Baltimore Ravens at 8:15 p.m. Saturday in the Divisional round of the AFC playoffs. Cedillo can treat himself to a proper meal for that one.