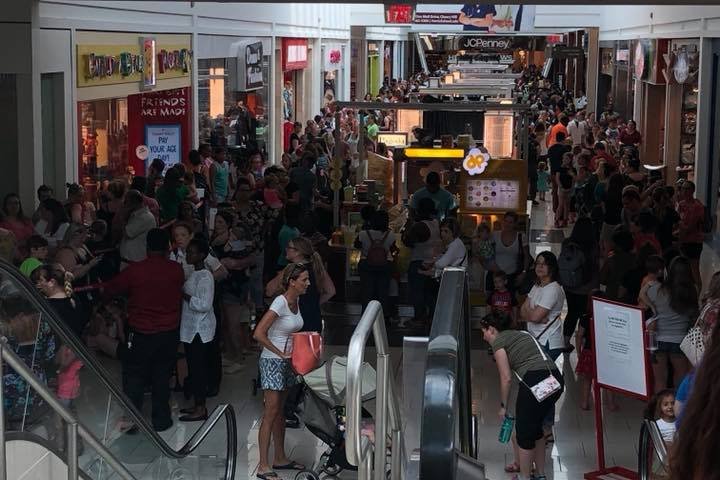 This photo shows the large line outside the Build-A-Bear Workshop in the Cherry Hill Mall on Thursday, July 12. The store rain a 'pay your age' promotion, which led to large crowds at Build-A-Bear locations across the country and forced the chain to end the promotion over security concerns.

Parents looking to snag a deal on cheaper stuffed animals flooded malls in the Philadelphia-area and beyond, forcing Build-A-Bear Workshop to limit a promotion.

The promotion, which took place Thursday at all stores in the United States and the United Kingdom, allowed customers to pay the amount of their age for their stuffed bear. So, if you're a 3-year-old, the bear costs $3.

Build-A-Bear stuffed animals can cost up to $25 a piece. With accessories, that price can climb significantly.

People are lining up at Oxford Valley Mall for a Build-a-Bear event. pic.twitter.com/EocMgbyksm

Things were apparently very testy at the Springfield Mall in Delaware County.

Thanks @buildabear at the @SpringfieldMall for making my kids stand in a long line for hours just to be told we wouldn’t be able to participate. You truly disappointed my 2 guys along with thousands of other children. Shame!

The line around build a bear is Soo long at Springfield mall. It is so long, it wraps around the mall inside. Wow @SpringfieldMall @buildabear #BuildABearWorkshop #PayYourAgeDay

The response to our Pay Your Age Day event has been overwhelming and unprecedented in our 21-year history, and the safety of our Guests and associates is our top priority. The crowds have greatly exceeded our expectations and, per local authorities, U.S. stores cannot accept any additional Guests for this event and are limiting lines due to extreme crowds and safety concerns. We understand our affected Guests may be disappointed, and we are working to address the situation. We will reach out directly to our valued Guests as soon as possible.

In a second, updated statement, Build-A-Bear noted that many customers weren't served, but the company has offered a way for those who waited in line but didn't get served to take advantage of the deal:

In response, we distributed vouchers to Guests, who were present in lines, to be redeemed for a future purchase. We are now making vouchers available to our Build-A-Bear Bonus Club members in the U.S. and Canada who log into their account by midnight on July 15, 2018. Vouchers related to this event will be honored through August 31, 2018.

Spokespersons for the Cherry Hill Mall and the Springfield Mall weren't immediately available for comment. Simon Property Group, which runs both the King of Prussia Mall and the Oxford Valley Mall, referred questions to Build-A-Bear.