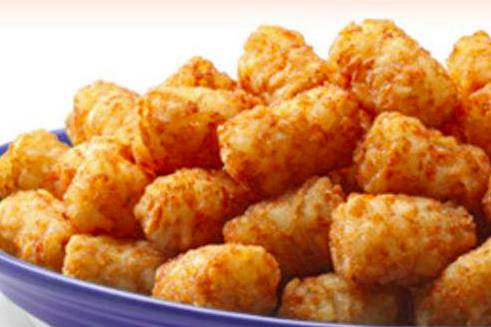 No matter what you hear, tater tots are totally acceptable for adults to eat. Philadelphia's appetite for them was celebrated last year at North Bowl, with the first-ever Tot Chef competition, so clearly the perception around this issue is starting to change.

That said, tots aren't always a joking matter. A bungled burglary attempt in Petaluma, California last Thursday gives proof to the tantalizing effect these bite-sized hash browns can have on a criminal plot.

According to SF Gate, 44-year-old James Adams successfully broke into the home of a Petaluma woman who happened to be upstairs and out of earshot. With no plan to rush the job, James decided to raid the kitchen.

So fulfilling were these tots that Adams decided he would take a nap on a downstairs couch. When the homeowner ventured downstairs, she found Adams and bolted back to her bedroom to call 911.

The dispatcher told the woman to get out of the house to a safe place, but the noise she made while leaving woke Adams, who fled out the backdoor and kicked his way through a fence to keep running.

Police posted on the next street over apprehended Adams. He refused to cooperate as the officers attempted to handcuff him and wound up getting shocked twice with a Taser.

With a lengthy criminal history, Adams was taken to the Sonoma County jail on suspicion of burglary and resisting arrest. He was being held there in lieu of $30,000 bail.

So if you want to slow down a burglar, try keeping some tater tots in your freezer. At the very least, you'll have them to eat for yourself before a nap.