Wentz was reportedly unhappy with the Eagles' success in 2017 while he was sidelined with a torn ACL. 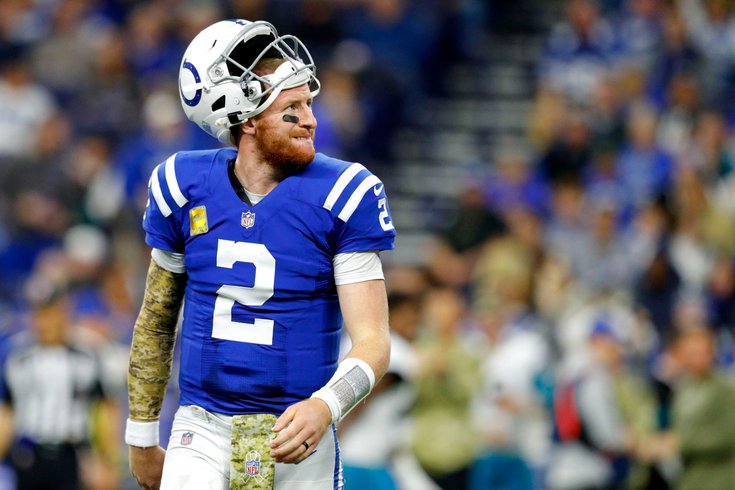 It's been a rough few months for Carson Wentz's reputation, and on Wednesday things might've gotten worse.

In a review of some leftovers from the NFL Combine, The Inquirer's Jeff McLane wrote about the differences between the former Eagles quarterback and the current starter Jalen Hurts, adding another knock to Wentz's growing list of accountability issues over the years.

This one goes all the way back to the Eagles' Super Bowl run in 2017, while Wentz was out with a torn ACL.

Sometime before the championship game, Wentz voiced his displeasure with the Eagles’ success to a group of other injured players, sources with direct knowledge of the incident said. One of the players immediately confronted him and the two eventually had to be separated.

Wentz certainly had his supporters or those that sympathized with the obstacles he faced in Philly. If he was more successful, others would have likely been willing to overlook some of his personality quirks.

But the Eagles’ predraft evaluation didn’t place enough emphasis on questionable character traits or that he lacked the mental strength to accept hard coaching and personnel decisions that directly affected him. [The Inquirer]

Wentz's character and leadership have been under question ever since Joseph's Santoliquito's story ran in January 2019, where numerous sources within or connected to the Eagles painted him as "selfish" and "uncompromising."

The team quickly went into damage control and made the playoffs with Wentz as the starter that next season, but the concerns remained and the Carson Wentz-Nick Foles debate that came with the Super Bowl title five years ago never really went away.

Everything quickly fell apart in 2020, leading to the firing of Doug Pederson and the trade of Wentz to a QB-desperate Indianapolis.

The Eagles went on to make the playoffs with first-year coach Nick Sirianni on the sidelines and Hurts under center, while the Colts collapsed down the stretch, missing the postseason largely because of Wentz's performance.

The Colts seem to be done with him altogether now, but they may have a harder time moving on than the Eagles originally did.