Wentz is going back to the NFC East. Here's how Eagles fans are feeling. 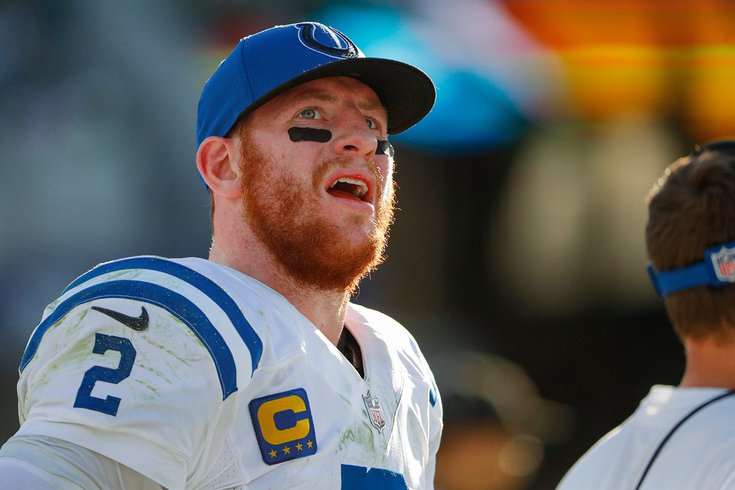 Indianapolis Colts quarterback Carson Wentz looks at the scoreboard late in the fourth quarter of his team's season-ending loss to the Jaguars.

And like that, the Carson Wentz era in Indianapolis is over.

The Colts traded him back into the NFC East to the newly-minted Washington Commanders for a package of draft picks and with Washington assuming all of Wentz's contract, reports ESPN's Adam Schefter.

This means the Eagles will see Wentz twice in 2022, and the immediate reaction that has been...something.

Here's a look at what fans and media are saying:

the group chat after the Wentz trade news hit pic.twitter.com/IfVvsJti5q

Shoutout Howie getting a first tho https://t.co/mVS55vgY2K

Carson Wentz to Washington. Wow! I would love to see the Eagles open the season at the Linc against Carson and the Commanders.

Washington Commanders after they traded for Carson Wentz pic.twitter.com/OmgzSOXFXi

Carson Wentz is a pyramid scheme. Washington is in Indy’s down line.

Don’t cry because it’s over.

Smile because the Eagles got draft picks & the Sixers got James Harden. pic.twitter.com/H5jo0sUGUO

This is great for the Eagles, they’ll be catching passes from Carson Wentz again.

Full recap of the Carson Wentz era in Indianapolis: pic.twitter.com/kHinmifjU1

I wish Carson Wentz the best (well, not against the Eagles). But if Doug Pederson and then Frank Reich gave up on him, it's hard to see how he's going to succeed with a hellhole franchise like Washington. https://t.co/gWjkMFBixM

If Frank Reich of all people is willing to trade Carson Wentz even though his team doesn’t have a starting QB you PROBABLY shouldn’t give up two third round picks for the right to pay him $28M+ this season. 🤔

Howie Roseman getting what ended up being a first-round pick for Carson Wentz a year ago is an all-time fleecing.