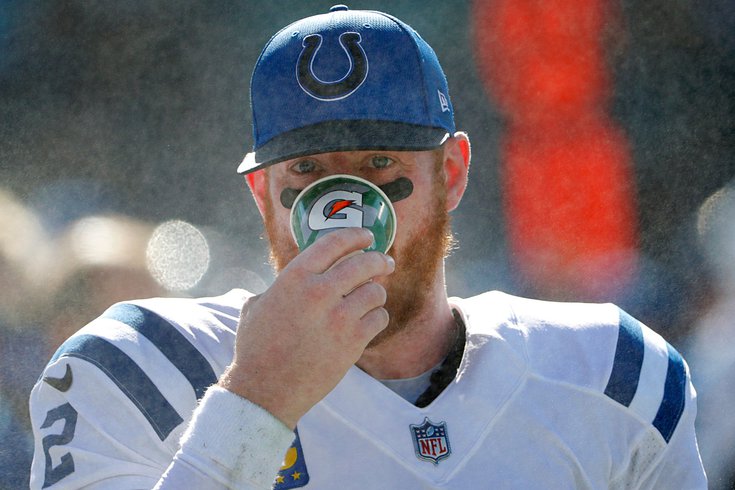 Carson Wentz takes a shot of Ivermectin during a timeout against the Jaguars.

The Indianapolis Colts somehow, some way found a way to unload Carson Wentz on another team. After trading first- and third-round picks for him with disastrous results last offseason, the Colts were amazingly able to salvage a return on their bad investment. According to Adam Schefter of ESPN, the Washington Commanders will be acquiring Wentz for the following package of picks.

On the tradeoff of 2022 second-round picks, the Commanders will move back from pick No. 42 overall to pick No. 47, where the Colts formerly resided. But also, it's the 70 percent provision again! I look forward to another year of the Carson Wentz snap count tracker, friends.

In addition to giving up valuable draft pick capital, the Commanders are also taking on Wentz's salary in full.

Washington is paying the full $28 million due to Carson Wentz this year, which includes a $5 million roster bonus due next week.

From now on, it's Commander Carson.

In 2020, Wentz was arguably the worst starting quarterback in the NFL. He wanted out of Philly after he was benched in favor of rookie second-round pick Jalen Hurts. The Eagles obliged and sent him to Indianapolis, where he really couldn't have possibly hand-picked a better situation, as the Colts had a great offensive line, arguably the best running back in the NFL, a (modest) upgrade in wide receiver talent, a talented defense, and a head coach with whom he felt a special connection in Frank Reich. Off the field, Wentz said that the "culture and values" fit his vibes.

And he still failed.

On paper, Wentz's stats in 2021 looked decent enough, as he threw 27 TDs vs. 7 INTs, but the eye test showed that he looked a lot like the "2019 version" of himself, with occasional "2020 version" awfulness sprinkled in. He made the occasional spectacular throw, but the moments of encouragement were overshadowed by his continued inability to make the "layup" throws.

With a 9-6 record heading into their final two games of the 2021 regular season, the Colts were near-locks to make the playoffs, needing only one win over the Las Vegas Raiders or the bottom-feeder Jacksonville Jaguars to punch their ticket to the postseason. Instead, largely due to a pair of bad performances by Wentz, the Colts lost both games and were eliminated.

The loss to the Jaguars Week 18 was particularly devastating, as Wentz completed 17 of 29 passes for 185 yards, 1 TD, and 1 INT, though the numbers didn't adequately convey how ineffective he was. He also lost a fumble on a vintage "2020 Wentz" play in which he tried to throw a shovel pass instead of just eating a sack.

At the NFL Combine, Colts general manager Chris Ballard could barely muster a kind word while answering a bevy of questions about Wentz. It felt like Wentz was destined to be outright released by the Colts.

Instead, the Commanders swooped in and paid an absolutely insane price to acquire Wentz, who will now have to face the Eagles twice per season for however long he is able to keep his starting job in Washington.

What a glorious day.