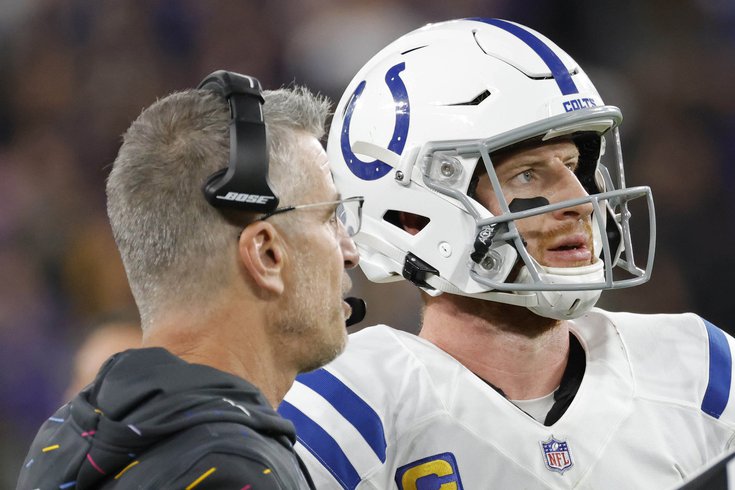 The 2022 NFL Combine is underway, sort of. The players haven't begun working out yet, but the NFL has descended upon Indianapolis, and media interviews with head coaches and general managers have begun.

Howie Roseman and Nick Sirianni will speak on Wednesday afternoon, but for now we'll round up NFL news out of Indy from Tuesday that at least loosely pertains to the Philadelphia Eagles.

On Super Bowl Sunday, Chris Mortensen of ESPN reported that Carson Wentz was likely to be cut or traded by the Indianapolis Colts this offseason:

Here’s @mortreport on ESPN saying the Colts are preparing to move on from Carson Wentz pic.twitter.com/Ymg9L4bcOm

Colts GM Chris Ballard on if a decision has been made about Carson Wentz pic.twitter.com/T6UWjN933z

Eh, that's not encouraging for Wentz. But the answer that was really telling came in response to a bland, non-pointed question about what traits Ballard looks for in a quarterback.

"Well, I mean, I mean, there's a typical, I mean, look, I can give you the typical accuracy, leadership, you know, makes crucial plays that win," Ballard said. "I mean, all the things, you know, you can just generically get up here and say. But ultimately, I mean, look, it's the most scrutinized position in sports. It is. And I think one of the most difficult to play in sports. Cuz you're playing a position where you've got to make accurate throws with people trying to actually hurt you.

"And then the scrutiny that comes into playing the position is week to week. In our league, it's a week to week league. And so handling the ups and downs of it, and stay in a steady course. I mean, there's so much that goes into it and then having a team around him that can win, you know, not just about him, but having a team. So I there's a lot that goes into that question."

On a follow-up question, it was noted to Ballard that Wentz is able to hear all the public debate about his future in Indy, and he was asked what residual effect that would have on him if he had to be the Colts' quarterback again.

"I visited today with Carson, for an hour," Ballard said. "It was good. It was really good. I think learning to handle the criticism, I think what you always have to ask yourself — I always ask it with the criticism that I get — which is, some of it's deserved. But I ask, is the criticism fair? Is it fair? I'll take it in if it's fair. If it's not fair then what am I doing? I'm not wasting my headspace on that. But if the criticism is fair, we have to be able to look internally and accept that and grow from it. Most of it's pretty fair, and it'll be interesting to see how he grows from this. And I think he will." 😬

Frank Reich was much nicer in his comments on Wentz, but even this quote looks rough in print:

Frank Reich on Carson Wentz: “I believe in Carson, I stuck my neck out for him last year. … I believe he’s going to have a lot of success, that might be here or it might be somewhere else. That decision has yet to be made.” pic.twitter.com/ZTaFAWTOG8

It felt obvious to me that the Colts couldn't bring Wentz back after the bad season he had in Indy. However, the way they have handled his situation has been honest, but perhaps self-defeating. If they had acted like Wentz was a great guy and a good leader who "just had one bad game to close the season," they might have tricked some dumb team into trading for him. But with the way that Ballard and Jim Irsay have been unable to play the game, they have completely wrecked whatever value Wentz might have still had.

The Eagles and Browns will reportedly have joint practices this summer

Last summer, the Eagles went 2-0 against the New England Patriots and New York Jets in joint practices. This upcoming summer, they'll spend a couple of days in Berea, OH in joint practices with the Cleveland Browns, according to Zach Berman and Zac Jackson of The Athletic

During the preseason games last season, the Eagles barely played anyone of importance at all, opting instead for having the team healthy and fresh for the regular season. Nick Sirianni felt that joint practices against the Pats and Jets were a lot like game situations, which helped prepare starters for the regular season and allowed for evaluation of bubble players during the preseason games.

Dak Prescott had surgery on his left shoulder

During his interview at the podium at the Combine, Dallas head coach Mike McCarthy said that Dak Prescott had surgery to "clean up" his left shoulder. Prior to the 2021 season, Prescott missed a big chunk of training camp and the preseason while resting his ailing right shoulder, which became a main storyline on HBO's Hard Knocks.

On its own, the "clean up" procedure probably isn't a big deal, but it's worth noting that Prescott's injury history continues to grow. Prescott played through an injured shoulder against the Eagles in 2019 and did not look right in a Week 16 game the Eagles won that ultimately decided the division.

In 2020, he suffered a gruesome ankle injury that ended his season and required multiple surgeries.

The Giants are open to trading Saquon Barkley

The Giants were not only arguably the worst team in the NFL by the time the 2021 season concluded, but they're also in horrendous shape, salary cap-wise. On Tuesday, new GM Joe Schoen said that he would be open to trading former No. 2 overall pick Saqoun Barkley.

Asked Joe Schoen how open is he to a trade for some of his better players, specifically Saquon Barkley:

“I’m open to everything…”

Said he’s willing to listen to pretty much anything. They have to make some difficult decisions on guys which will be coming “soon.”

Barkley was amazing as a rookie in 2018, when he gained over 2,000 yards from scrimmage and scored 15 TDs, but he has racked up a laundry list of serious injuries and last season he looked nothing like the player he once was.

Barkley is scheduled to play on his fifth-year option in 2022 at a fully guaranteed $7.2 million. The best they could probably hope for him in a trade is what, an early Day 3 pick?

It was obvious in 2018 that drafting a running back with the second overall pick was incredibly stupid, and that decision has played out about as predictably as imaginable.

The Commanders will aggressively pursue a quarterback

On Tuesday, Ron Rivera said, "We believe we have a lot to offer" a potentially available franchise quarterback. While one might disagree on the premise that (a) Washington is among the most reprehensible franchises in professional sports and (b) it's where quarterbacks go to die, it is clear that they are in the market and willing to pay a high price to go get one:

At the Combine, @JPFinlayNBCS asked Ron Rivera how much is too much when dealing for a quarterback. Ron's answer: "Does anybody really care what was traded for Matthew Stafford last year? Nooooope"

Their involvement could perhaps drive up the price for other teams that are also in the market for a new quarterback.

Russell Wilson doesn't want to play "on the east coast?"

Wilson appeared on The Today Show and was asked about playing for the Washington Commanders in 2022. Wilson responded that while he loves the east coast, the west coast (and more specifically Seattle) is where he is and where he wants to be.

Russell Wilson asked by @craigmelvin about coming to Washington: “I’m from Richmond, I know what you mean, I got people hitting me up every day, all my friends and all that from the East Coast but Seattle’s the place I’m at right now and I love it.” Video from @TODAYshow pic.twitter.com/VmqQdXbHfI

As you're aware, Philadelphia is also on the east coast. Of course, there are only three teams other than Seattle that are on the west coast, none of whom are shopping for quarterbacks. Wilson may very well remain in Seattle this season, but as Carson Daly(?) was quick to understand in the above clip, Wilson was merely giving a diplomatic answer.