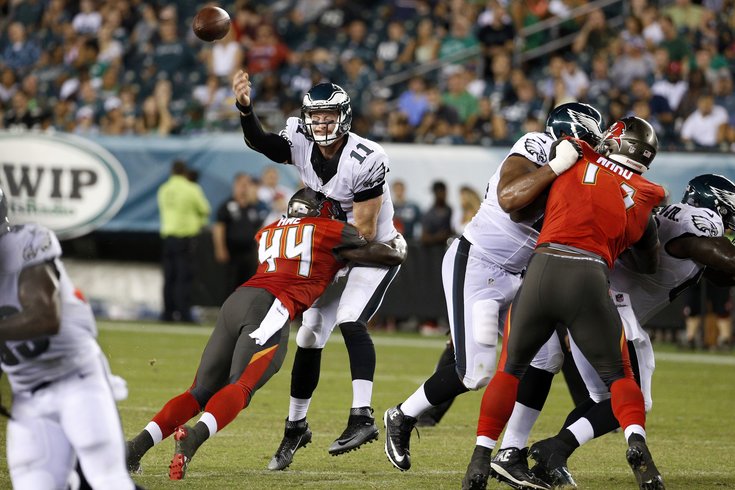 This is most likely the hit that fractured rookie Carson Wentz's rib.

Following his NFL debut, a 17-9 win over the Tampa Bay Buccaneers, Philadelphia Eagles rookie quarterback Carson Wentz said that the hit he took on his last play of the preseason opener was probably going to leave him a little sore the next day.

As it turns out, he's still sore – and is going to stay that way for some time.

On Saturday afternoon, the Eagles announced that Wentz has been diagnosed with a hairline fracture in his ribs after leaving practice due to the discomfort and undergoing an MRI. They did not offer a timetable for his return, but first-year head coach Doug Pederson said he's hopeful his rookie will be able to return before the end of the preseason.

“Carson felt some discomfort and soreness as we began this morning’s practice," Pederson said in a statement released by the team. "We decided to limit him throughout the remainder of practice and, as a precaution, sent him for a CT scan after practice. The scan revealed a hairline fracture in his ribs. We do not know an exact timetable for his return, but we hope to have him back before the end of the preseason.”

Wentz took a number of hits against the Bucs, including one that could have ended with him suffering an even worse injury, but it appears this hit by rookie linebacker Micah Awe is the one that did the most damage:

Eagles O-Line doing a good job of protecting the team's most valuable investment in his debut #NFLPreseason #Wentz pic.twitter.com/5JrYbm0tXj

Prior to that hit, Wentz had himself a pretty good debut. He outplayed backup Chase Daniel and even though he threw an interception, looked about as poised as you could hope from someone seeing his first NFL action.

When will he see his next NFL snap? We'll have to wait and see.