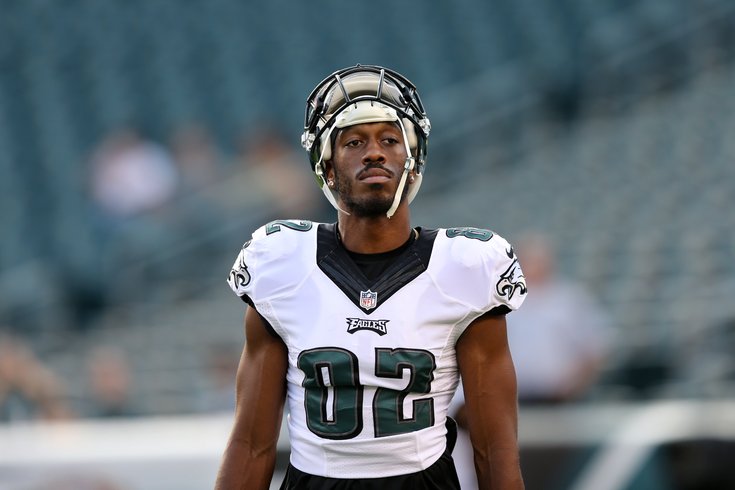 If you're a Rueben Randle fan, read no further.

In re-watching the Philadelphia Eagles' first preseason game against the Tampa Bay Buccaneers, one of the things that was very obvious was the lack of separation -- and therefore production -- from the Eagles' wide receivers. Several Eagles had dropped passes, Josh Huff fumbled, and most couldn't get open.

There was no bigger offender, however, than free agent wide receiver Rueben Randle, whose effort Thursday night was nothing short of pathetic.

Randle barely ran routes, he didn't block, he dropped an easy pass, he made a bonehead play that resulted in a penalty, and even when he caught a pass he was basically jogging. If Randle's performance is indicative of the way he plays the game, you won't find a quarterback anywhere that would ever want him on the field.

• As we pointed out in our review of Carson Wentz's first game as a pro, watch this atrocious route.

This is man coverage on a deep route. This is what receivers should live for. Randle runs three-quarter speed down the sideline seemingly having no interest in beating his man, turns his head as he's throttling down, and looks legitimately surprised the ball is coming his way. Awful.

• This is a gross route by all involved, but ew:

• On this one, Randle is at the bottom of the screen. There's nothing crisp about this route at all. Randle should be getting to the spot, putting his foot in the dirt, and turning. This, however, is crap:

On the play in which Huff fumbled and the ball was heading toward the sideline, instead of just catching it and stepping out of bounds, Randle swatted it out.

That's a penalty. That should have been a first down, but instead put the Eagles in a third and long situation that they could not convert. Randle killed a drive because he either didn't know the rules or couldn't be bothered to catch the ball and step out of bounds. Or both.

Not competing for ball in the air

Here's a pass that should have been intercepted but was dropped. Instead of competing for the football, Randle does some kind of foofy jump:

Your QB made a bad throw. Help him out. Interfere if need be. But don't do whatever that was.

Ineffective even when catching a pass

Even on the one catch he had, Randle is jogging on a drag route, makes the grab, runs backwards, and is down almost immediately without any sort of attempt to make a move to get yards after the catch.

Oh yeah, and he had a bad drop.

Look at this punishing block:

• And this one. Lol. (I promise it's different from the one above):

• Sadly, this was by far his best block of the night:

In the Eagles' first preseason game, Rueben Randle looked teenage McDonald's employee who didn't want to be there. The above is wholly unacceptable in a team sport. If the Eagles cut him, they'll incur $500,000 in dead money. In my view, if you keep him, it sends a terrible message to the team that the kind of effort Randle gave Thursday night is in any way tolerable.