Blossoming star is an impeccable pitchman and gentleman athlete 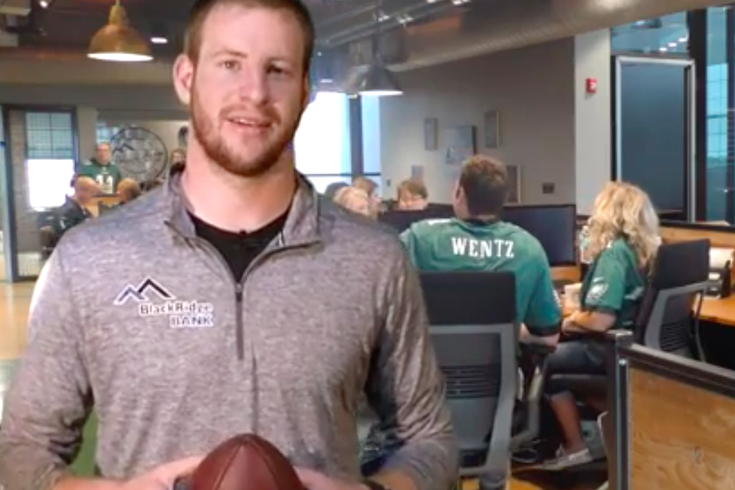 Carson Wentz, face of the next hard pretzel, the Wentzel.

Forget the 2-0 start, forget the zero turnovers, forget all the Wentzmaniacal amperage surging through your devices and blood (must be the free Dunkin' Donuts coffee), and forget that the NFL season is a long and winding road you just can't ever anticipate, beyond the Patriots doing stuff that rhymes with "beating."

Carson Wentz is in a commercial, Eagles fans. It's getting real. You can practically see him in a robe at Target buying AA batteries and geriatric dog food about 15 years and five Super Bowls from now, still being the man.

For now, it's BlackRidgeBANK in North Dakota, baby!

It seems fairly straightforward that the Bismarck native would ink an endorsement deal with a hometown favorite, but there's actually a great backstory behind Wentz's union with BlackRidge.

MORE EAGLES COVERAGE: Don't look now, but Carson Wentz and the Eagles might just be for real | Statistical proof that the Eagles are balling | Handing out 10 awards from the Eagles-Bears game | Doug Pederson explains Carson Wentz's success against the blitz | Blocking out praise now can only help Carson Wentz when vultures begin to circle | President Obama: VP Biden told me to 'Get on the Wentz Wagon'

"His father has been a mortgage loan officer in the region for years," said Mark Anderson, CEO of BlackRidgeFINANCIAL, in an interview with PhillyVoice. "Earlier this year he came to work with us just as things were heating up toward the NFL Draft."

Wentz had just been named MVP of North Dakota State University's fifth straight FCS championship, a 29-27 victory over Illinois State. His draft stock spiked among talent evaluators who saw winning and winning, plain and simple, never mind the non-FBS school. He was a local hero.

"He's an icon here," Anderson said. "He has a very strong moral character that appeals to a lot of people. He handles everything in a cool and calm fashion."

After the Eagles went all in on Wentz in the draft, he got a request for a few local appearances.

"Interestingly, he's an avid outdoorsman," Anderson said. "He did some autographs at a regional sporting goods shop. Around here, people started realizing how big he was going to be in the future, whether he played this year or not."

Wentz's dad approached Anderson and asked him he ever thought of doing something like that for BlackRidge. There's no better introduction than that.

"Nobody here has ever done an endorsement deal with a professional athlete like this," said Anderson. "There were a lot of pieces to put together with his agent, but it worked."

The company announced the endorsement deal in a press release in early August. It delivered the perfect language to adopt to firm up a deal on a sun-bleached cattle ranch in the middle of North Dakota.

“Our approach to financial solutions emphasizes innovation, creativity, and client-centricity," Anderson said in the release. "This agreement is a natural extension of the innovative thinking we foster throughout the organization. As an athlete and a person, Carson is an impact player, just as we strive to be an impact player for our clients."

No one knew then that Teddy Bridgewater would go on to suffer a devastating camp injury that set the wheels in motion for Sam Bradford's trade to the Vikings.

"There was chatter about him not seeing the light of day with Bradford and Daniel there," Anderson said, "but we did this because of his class and potential. We looked at it with eyes wide open."

Good call. Wentz, who led the Eagles to their second straight win of the young season on Monday night, is suddenly the highest trending guy in the sports world right now. His name will be all over ESPN for months.

"I haven't followed the Eagles since Dick Vermeil was coach," Anderson joked, "but it has clearly escalated attention around here. Kids are forgetting about the Vikings, Packers and Broncos. They're getting Eagles jerseys and following Philadelphia."

The sight of those jerseys threw a light switch in Anderson's mind. Why not have Wentz sign 200 jerseys and have them facilitate both the brand and the reams of customer interaction involved in taking out a mortgage?

"A mortgage represents clear stability and there are elements of profitability to it," Anderson explained. "The jerseys are also a great portal for us to connect with our customers. It's already been huge for us."

Ten charities have reached out to BlackRidge about the jerseys to support their causes and customers are hard-pressed to turn away a deal that will put a valuable item into their hands as they size up the next 15 or 30 years of their lives.

"We're clearly associated now as the bank that's with Carson Wentz," Anderson said with pride. "I've been in banking 34 years and it's clearly the best point of market recognition I've ever seen."

We've all seen Wentz on highlight reels and gameday graphics, pitching a football between his hands in that odd kinetic stasis every major athlete seems to naturally own, except maybe Jay Cutler. These commercials mean something else entirely for him and the upper Midwest communities he championed in his post on The Players' Tribute.

Wentz flew back to North Dakota in the middle of training camp to film the first commercial. The second one was shot just after the start of the regular season.

"Both of them have been running during Bison games, Eagles and other NFL games, some local sporting events," Anderson said. "It's estimated we're getting about 150,000 eyeballs each time they air. Sports is all about marketing, anyway, right?"

The deal with Wentz will also include "a range of promotional media" in the Fargo and Bismarck regions, including radio, billboards, print and social media campaigns.

“Carson has strong ties to Bismarck, Fargo, and the entire region with an impeccable work ethic and represents an ideal professional to team up with as we continue our growth and introduce creative solutions for our clients," added John Jessen, director of retail banking at BlackRidge.

Wentzmania has a home away from its new home.

"We hope the Eagles go to the Super Bowl," Anderson said.