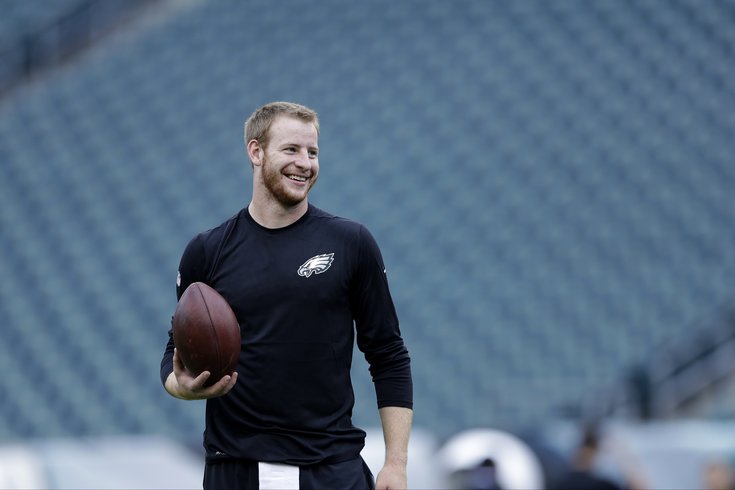 The Carson Wentz era in Philadelphia is officially underway, as Doug Pederson said that the rookie will be his starting quarterback Week 1 against the Cleveland Browns.

"Obviously we made this decision and I spent the weekend with my offensive staff, Frank (Reich) and (quarterbacks coach John) DeFilippo, really the entire staff, and everyone feels that this kid is ready to go," Pederson told reporters Monday morning. "We drafted him to take on the reins, and it's something now that we're prepared to do and we look forward to Cleveland, and one day at a time with him. At the same time, we have to be smart with how we handle it, but at the same time we expect him to perform like he's capable of performing like we've seen throughout OTAs and training camp."

Pederson confirmed that Wentz is 100 percent healthy after sustaining a rib injury in the first preseason game against the Tampa Bay Buccaneers. He reiterated that the belief is that Wentz can handle the spotlight.

"The fact that I had a chance to go watch him and work him out way back in the spring, meet the kid, a mature individual, what he did in all of OTAs, what he's done around this building, the plays he's made in practice and in the one preseason game, has given me confidence that he can lead this football team," Pederson explained. "I'm excited. I'm thrilled that this is an opportunity for him, and opportunity for our organization, our team, and we're going full steam ahead. I feel fully confident that we'll be able to get the job done."

All offseason, Pederson stressed that the plan at quarterback was for Sam Bradford to be the No. 1 quarterback, Chase Daniel the backup, and Wentz the No. 3, learning and developing behind the scenes. That plan changed abruptly when the Eagles traded Bradford to the Minnesota Vikings on Saturday.

"The trade happened," said Pederson. "We were fortunate to get some draft picks back that we gave up for the trade for Carson. It was right for this football team. It's something that we believe in, I believe in. This is why we drafted him. Would the ideal situation be later than sooner? Sure. But right now where we are, we have a good football team around him. We have a great defense, special teams, a good offensive line, good run game, so all the pieces are here for him to be successful and for us to win some games."