The African American Museum will host two full days of programming on Dec. 26 and Dec. 30 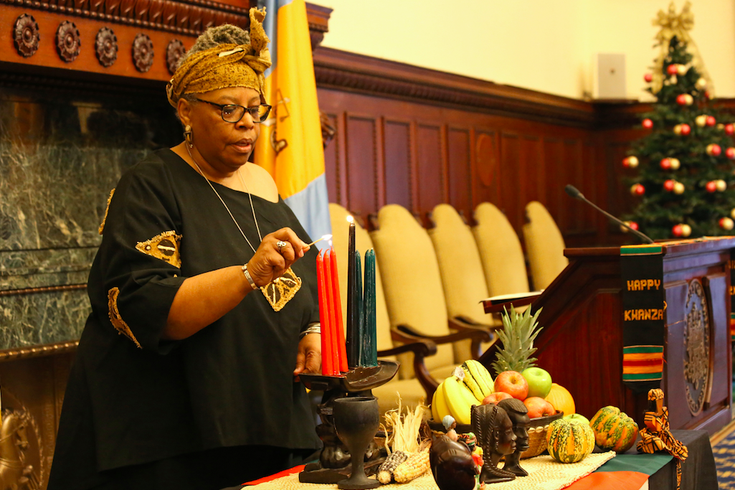 In Philly there's lots of fun programming happening in honor of Kwanzaa, a holiday which celebrates African American history between Dec. 26 and Jan. 1 every year.

The day after Christmas can be a little anticlimactic for some, but for those who celebrate Kwanzaa, that's just when the fun begins.

The annual seven-day celebration of African American culture goes from Sunday, Dec. 26 to Saturday, Jan. 1. In Philly, a city that's nearly half Black, there are lots of ways to join the festivities.

The African American Museum of Philadelphia will have tons of Kwanzaa programming – both within its walls, where it's included in the price of a ticket or at no cost members, or for free out in Franklin Square.

Both days will begin with the lighting of the kinara, a seven-branched candle-holder which is similar to the menorah used during the Jewish holiday of Hanukkah, and finish with a traditional drum circle.

For those looking for something free to do at night, the museum will also have arts and music programming going on in a heated tent at Franklin Square between 5:30 and 7:30 p.m. from Dec. 26 to Friday, Dec. 31.

Participants are asked to RSVP to the events at the museum on Sunday and Thursday and to the free Franklin Square programming.

The city government will kick off its Kwanzaa celebrations at 4 p.m. on Dec. 26 when they'll light up Boathouse Row on the Schuylkill River red, green and yellow. This will follow the red, white and green Christmas lights that'll be on the boathouses starting Dec. 20 at 4 p.m.

Participants can stream the lighting on the Mayor's Office of Public Engagement's Facebook page or seek out a high vantage point to get a good look at them. Good spots include the Fairmount Water Works and Martin Luther King Jr., Drive.

For those looking to celebrate the holiday virtually, the Free Library of Philadelphia will be holding a family-friendly Kwanzaa arts and crafts event starting at 4 p.m. on Tuesday, Dec. 28.

Although elements of Kwanzaa have a deep history in both the African diaspora and the continent itself, the holiday wasn't officially invented until 1966 in Los Angeles.

A professor and activist named Maulana Ndabezitha Karenga came up with the holiday as a response to the racially-motivated Watts riots, which tore apart much of South-Central Los Angeles that summer.

He initially intended the holiday to be a distinctly African American alternative to Christmas which was meant to imbue the community with a clearer sense of its heritage and connection to the rest of the African diaspora.

Eventually, Karenga expanded the holiday's scope so Christian African Americans could join the festivities without having to give up Christmas.

The seven candles on the kinara stand for the holiday's seven guiding principles, which are unity, self-determination, collective work and responsibility, cooperative economics, creativity and faith.