At Center City pizzeria, from paying it forward to Facebook to Boom! 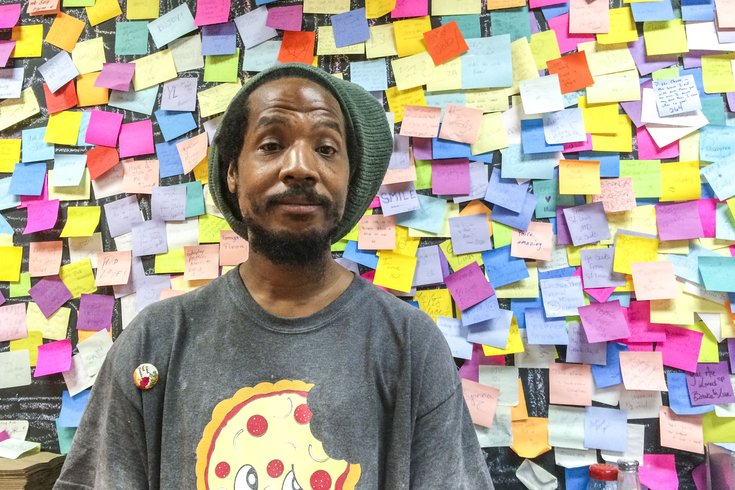 Once dead, Rosa's Fresh Pizza is now booming thanks to social media, says manager Keith Powell. Each sticky note represents a dollar donation to buy a homeless person a slice.

Before it became a darling of social media, Rosa's Fresh Pizza on 11th and Market "used to be really dead in here. It sucked, it was boring,” said manager Keith Powell.

Then came the idea of giving customers the option to donate a dollar to feed a homeless person pizza for free, which caught the attention of The Ellen DeGeneres Show, which in turn caught the attention of social media, specifically Upworthy, whose video in March on Rosa's pay-it-forward strategy has gotten more than 35 million views and 800,000 shares on Facebook.

“I don’t know how it say it. It’s so good. What they did was awesome, because it really blew us up…social media did awesome for us.” – Keith Powell, manager of Rosa's Fresh Pizza

Since then, Powell said, business has been "booming." As of June, the store has given away more than 23,000 slices of pizza.

“As soon as it went on there, 'Oh my God,' ” he said. “A lot of wonderful people have come down here from all over the world and they gave us donations.”

The entire restaurant is wallpapered in multi-colored sticky notes. Customers write out a note when they donate a dollar for someone else's meal. A homeless person only has to say "off the wall" and they get a free slice. The restaurant now feeds around 40 homeless people a day.

“I don’t know how it say it. It’s so good. What they did was awesome, because it really blew us up…social media did awesome for us,” Powell said.

The social media attention also made life a lot more "crazy" and "hectic" at the restaurant, but now business has slowed to comfortable levels. Owner Mason Wartman estimates that the restaurant gets around 400 customers a day.

"Now, it’s like a steady pace, because everybody knows about us. We’ve got good food here and we take care of the homeless people,” said Powell.

One of the people who takes advantage of the free food is 28-year-old Brian Bowerman, who has been going to the store since it opened.

“I only eat there when I’m really, really hungry, but whenever I’m starving, yeah, I go in there and have a slice,” he said.

Since the shop was featured on The Ellen DeGeneres Show, Bowerman noticed that its “popularity doubled, if not tripled.”

Now, the store is selling t-shirts and sweaters to help feed more people, including one t-shirt designed by a homeless artist. Every time a customer bought a sweater this winter, a homeless person got one for free; information about local shelters and resources are printed on the inside.

"We give out clothes, we give out anything people give us to give to them,” said Powell.

Now that it’s not sweater weather anymore, each $18 t-shirt is worth 9 slices of free pizza.

The store has also hired three formerly homeless people as employees – one full-time and two part-time. For example, 40-year-old Derrek Wallace (pictured below) survived a year of homelessness around three years ago. 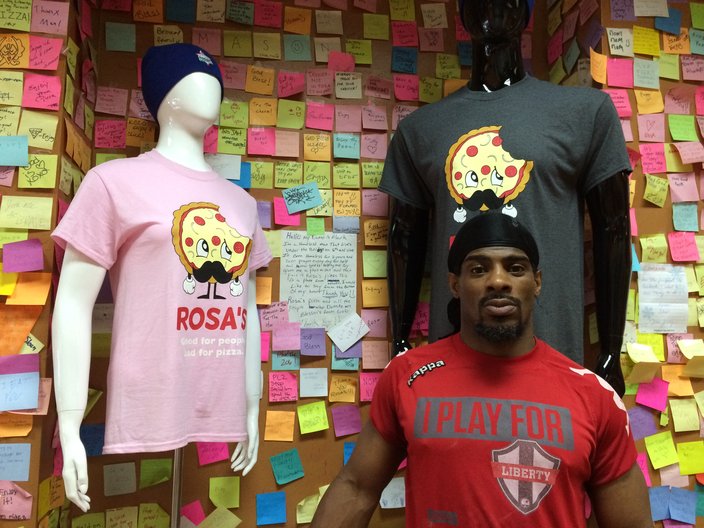 
He got back on his feet with help from a shelter, and a friend told him about Rosa’s, where he’s been working for the past six months. In his spare time, he’s passionate about playing soccer and has competed nationally with Street Soccer USA, an organization that helps needy populations through sports.

“It’s an opportunity to give back to people…This is a good atmosphere,” he said about his job. He hopes that Rosa’s will start organizing fundraisers to give even more back to employees and the community.

Regular Mark DeCaro notes that there may be another reason for the store’s continued success: the pizza itself has improved.

“The pizza really wasn’t the greatest when it first opened. They’ve actually come a long way in the past couple of months,” he said.

Between the tastier pizza and the positive publicity, the store is running out of wall space for its sticky notes.

As DeCaro noticed, now the wall is "two layers deep in some places.”