Until this week, school officials had threatened discipline if student and dog came to school 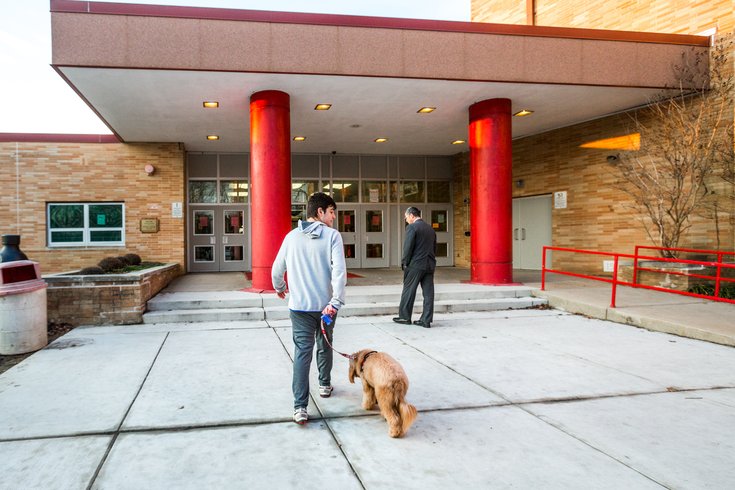 After waiting for months for this day, Cherry Hill East High School student Ben Shore, and his service dog, Charlie, walk into the school alongside principal Dennis Perry on Thursday, Feb. 2, 2017.

Shore was accompanied by his father, Eric A. Shore, who drove him and the dog to school: The school district's service dog policy bars the animals from school buses, even though the policy breaks state law, according to a state senator.

Ben Shore, 16, and Charlie – the dog wearing a bright red vest identifying him as a service animal – entered the building at 7:22 a.m., just ahead of the start of school.

They were scheduled to first meet with the school's principal, Dennis Perry, and also to present health certifications for the dog. According to Shore, a request to allow several members of the media to attend the meeting was denied. A man who identified himself as the school's director of security -- Anthony Saporito -- ordered reporters away from the public school on Thursday morning.

The high-schooler has credited media attention with Charlie finally gaining access to the building.

The dog was picked up in three hours, part of a plan to slowly transition Charlie into Shore's school life.

"I don't want to stress him out -- or anyone else. The day went really good for the part Charlie was here," Shore told PhillyVoice.

The service dog's first school day was 18 months in the making.

The South Jersey school district has a restrictive policy toward service dogs in place and had previously threatened Shore with severe discipline if he brought the dog to school.

Diane Allen, a New Jersey state senator from Burlington County who has sponsored service dog legislation that imposes fines when these trained animals are denied access, had recently said the portion of the district’s policy barring service dogs on buses clearly broke the state's law.

While not directly commenting on the legality of the district's standing bus policy, schools spokeswoman Barbara Wilson said Thursday that Charlie is now allowed on buses, which are operated by a contractor. 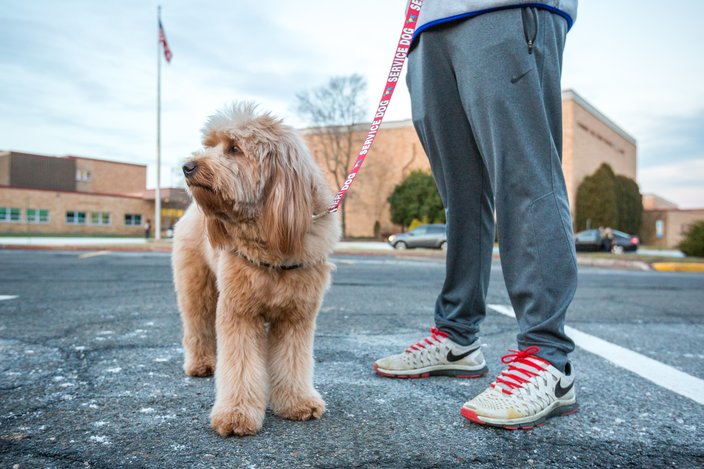 There are other portions of the district’s policy which also appear to potentially not comply with state policy, nor the federal Americans with Disabilities Act.

The district has repeatedly declined to discuss its current policy, or how it came to be put in place despite more liberal state and federal policies that preceded it, except to acknowledge that its policies were actively being revised.

But Shore, who had obtained a working draft of the proposed changes under consideration by the school board, told PhillyVoice that many of the changes were worse than the current questionable access policies. He based his comments on advice he obtained through a national ADA hotline.

Without explanation, the district on Wednesday informed Shore via email, and other students and parents through a website posting, that the service dog would be allowed into the high school on Thursday. Privacy laws do not allow the district to mention Shore, but the student told PhillyVoice that he and his dog were going to school together after getting the email.

On Thursday, Wilson again declined to discuss specifics of proposed changes in the district's policy, which will be discussed at the board's next work session, on February 14. With advance notice, the board could vote on the proposed language at that meeting.

"We're working every way we can to be in compliance and to also have a policy everyone can sign off on and be set to go," she added.

Again while not discussing specifics of the district's standing policies, Wilson addressed why Shore had been threatened with discipline had he come to school on Monday as he initially planned and why then he and Charlie were invited to attend school together on Thursday.

She said the high school needed time to prepare internally and to make notifications to students and parents. Wilson said the bus company, because it is an outside contractor, wanted more information and questions answered.

Shore, who is on the autism spectrum, has ADHD and is prone to panic attacks due to anxiety, acquired Charlie, a golden retriever and poodle mix, about 18 months ago. A junior, he had trained the dog to anticipate his panic attacks and calm him, and had planned to take the goldendoodle to school with him, though that had not happened before Thursday.

The district has also stalled on assuring access for another student with disabilities, the boy’s mother told PhillyVoice. Emboldened now, she is now pushing for quicker access for her son and his dog, Mercy.

Wilson said she was unaware that the mother had contacted the district.

Another parent, whose child has life-threatening reactions to dog allergens, is worried that district policy shifts could harm her son. But neither of the two students with service dogs attend her son's school.

"We're still in the process. The health and safety of our students is our concern," said Wilson