Checking in on the Eagles' season over/unders, part two 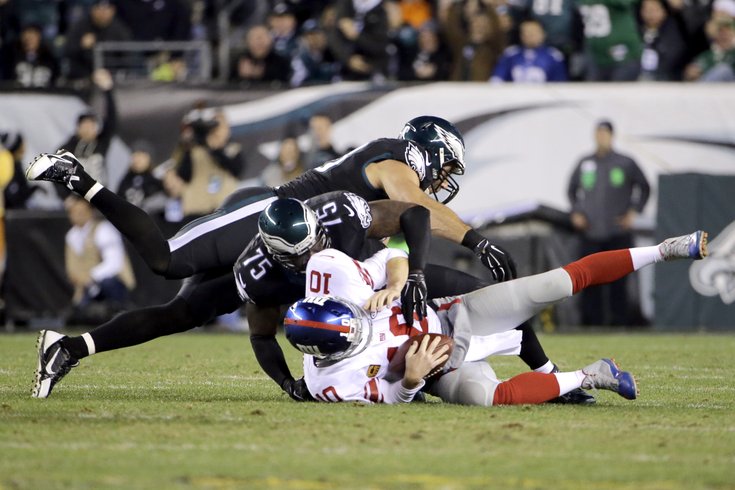 On Thursday, I took a look back at some of my season predictions for the Eagles, which came in the form of 10 over/unders. Today, it's time to take a look at the rest of my (probably awful) predictions.

First a quick look at the first five, and where they are relative to the total number I set in the beginning of the season. As you'll see, I didn't do too well...

You can read my full take on what I think will happen regarding those five over/unders, here. And now, a look at the final five.

“The Eagles had just one drive over eight minutes long last season and two over seven minutes, as far as I can tell. It's hard to imagine they won't have at least one scoring drive over this length, especially now that they have better red zone weapons in Murray and Mathews to punch the ball in during goalie situations.”

I still think there's a good chance the Eagles hit the over on this, especially if they get their act together in the first quarter of one of these games and can actually build a lead rather than play from behind all the time. However, that six-plus minute drive came in their Week 1 loss to the Falcons and they haven't really come close to a scoring drive that long ever since. Would it shock me if they don't hit the seven and a half minute mark? Not at all. But I'm still not ready to bet against it.

I really didn't think the Eagles would come close to touching their NFL-worst number from a year ago, but looks like I may wind up being wrong. Currently, they're on pace to allow 16 plays of 40 or more yards -- they've allowed eight already according to Pro-Football-Reference --  and that's not good considering they completely revamped their secondary in the offseason.

Currently on pace for: 0

“In the past, Kelly has only gone for two out of necessity, namely in the Snow Bowl vs. the Lions and late in a loss to the Vikings that same year when the team needed points quickly.”

I guess Chip wasn't kidding when he said that the distance added to extra points wouldn't be enough to tempt him to try for two, even after losing kicker Cody Parkey for the season and watching his replacement, Caleb Sturgis, miss a pair of PATs. Unless something changes dramatically in the second half of the season, I'm fairly confident I may actually get this one right.

Currently on pace for: 38

“The Eagles had 49 sacks last season, tied for second-most in the NFL. While that seems great, it becomes decidedly less so once you consider the fact that their defense was on the field more than any other team in the league last year.”

The Eagles will need to get 26 sacks (or 3.25 per game) the rest of the way in order to prove me wrong on this one. And in order to match last season's total of 49, they'd need 30 sacks (or 3.75 per game). I just don't see that happening. It's not like their front seven is playing poorly, but they put up such a monstrous number last season that it was going to be almost impossible to match this year.

Currently on pace for: 8

“Chip Kelly's been able to win with Nick Foles, Mark Sanchez and a way-past-his-prime Michael Vick; a healthy Sam Bradford is a much better passer than any of those three.”

Can they win 11 games? Sure, but that would require a 7-1 finish to the regular season. That ... probably isn't going to happen. They have the most difficult three-game stretch of the season ahead of them (at NE, vs. BUF, at ARI) and I just don't think 11 wins is in the cards anymore. Luckily for them, their division is so bad that it may not wind up mattering whether or not they hit double-digit wins; 9-7 may be enough to get the job done.

If not, 10-6 is almost certainly enough.