The first-ever season of the show premiered this summer 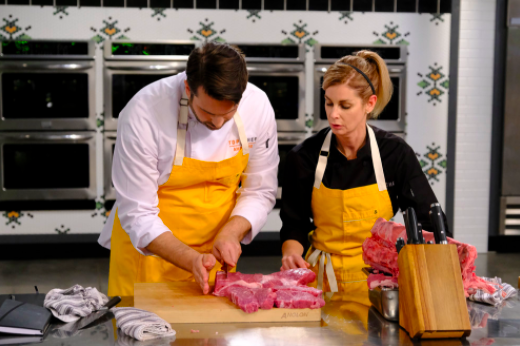 Philadelphia chef Jen Carroll, who co-founded Spice Finch in Philly and was featured on Season Six of "Top Chef," guest starred in four episodes of the new show.

Each week, two new cooks are paired with a "Top Chef" alum to help mentor them as they compete in the "Top Chef" kitchen and complete old challenges featured on the hit show.

"They're not beginners that have no idea what they are doing, but they're not yet professional chefs," Carroll told PhillyVoice. "Maybe they do blogs or they just love cooking for their friends and family and want to show off their skills and take a chance at the Top Chef kitchen and see if they got what it takes."

Carrol served as a guest judge for two episodes and a sous-chef for two additional episodes. "Top Chef Amateur" contestants have to direct their sous chefs and tell them what to do, and Carroll said it was a challenge to not jump in and take over.

"The mentoring part, what was hard for me — and I know talking to the other chefs, the other 'Top Chef' alums — was not being able to fully dive in and be like, 'let's do this or let's cook it this way,' because it's all about what the amateur wants to do, not what we would do," she said.

Carroll said while she was mentoring contestant Kolby Chandler, he had to do a challenge where he had to blind taste test ingredients to use in his dish.

"His reactions had us all in tears laughing so hard, let’s just say [we] all know now that he does not like caviar," Carroll said.

"Top Chef Amateurs" is a great way for "couch critics" to get a taste of how hard competing on the show is, Carroll said.

"Five minutes goes a lot quicker than you think when you're up against the clock," she said. "The anxiety of being in the kitchen, working with the 'Top Chef' [participant], seeing Gail, seeing the other 'Top Chef' judges, it's like, 'Holy crap what do I do?'"

Carroll grew up in the Philadelphia area and co-founded Spice Finch with her fiancée. She also created the Carroll Couture Cuisine Company, which is a culinary experience company that offers private virtual classes and public classes.

"Top Chef Amateurs" airs on Bravo every Thursday at 9 p.m.