'We are angry ... that children looking to get an education have gotten bullet holes instead,' one student told the senator 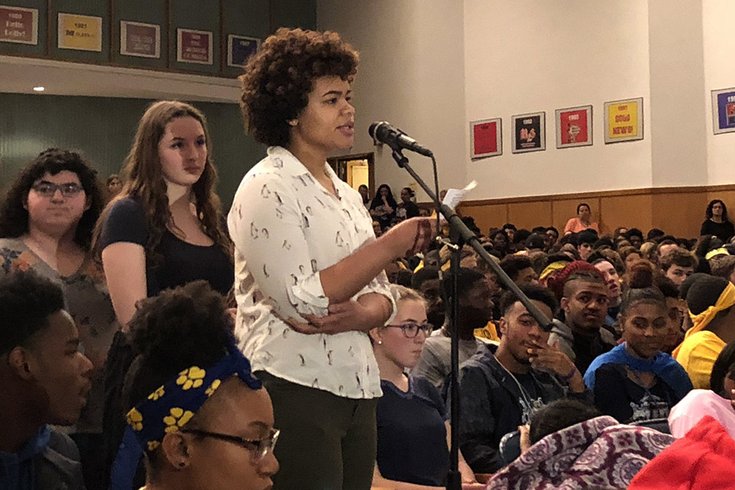 Cheltenham High School student Celeste Greene urged Sen. Bob Casey to use his political power to bring about stronger gun laws. "We are angry," she told the senator. "Angry that entering a school shutters fear and anxiety in so many students. Angry that children looking to get an education have gotten bullet holes instead."

With the mass shooting in Parkland, Florida rekindling a heated gun control debate, Pennsylvania's senior senator addressed about 3,300 students Friday at Cheltenham High School, who have endured threats of their own in recent weeks.

"Your generation is leading," Casey told students at the Montgomery County school. "I don't want you to underestimate what you're doing. I know it's been a very difficult couple of weeks, not only in terms of what happened in Florida, but what is happening here in Cheltenham.

"Let's give your generation a hand for leading America in an important debate," he added.

They peppered the Democrat with questions, inquiring about the steps he will take to keep guns out of schools, the influence he has over Republican colleagues, and his previous stances on gun control – which shifted following the Sandy Hook shooting in 2012.

"We are angry," Celeste Greene told Casey. "Angry that entering a school triggers fear and anxiety in so many students. Angry that children looking to get an education have gotten bullet holes instead.

"And angry that we have to arm ourselves with microphones and shield ourselves with knowledge because the people in power have not fought hard enough for change."

As Greene spoke, the auditorium erupted with cheers and rounds of applause.

"The larger intensity reflects what we see across the country with young people, not only on this gun violence issue, but on other issues as well," Casey told reporters after the event, billed as a gun reform student town hall. "They are, in this case, particularly mobilized and frankly very, very effective at moving the needle. I said the ground has shifted. I believe that it has."

On Monday, two Cheltenham High students were arrested after they allegedly threatened to harm the school on Instagram.

On Thursday, Green said, students received an email that a group of people had entered the building after school hours, one of whom allegedly had a gun.

"The aftermath of Parkland could be different. But we'll have to put in the work to make it so. We, as teenagers, will carry this movement. We're not too young. We're not too ignorant." – Eve Glazier, Cheltenham High senior

In addressing Casey, she called for more safety drills and better safety protocols. She also urged Casey to use his political power to pass regulations that will keep students safe.

Earlier, Casey had touted his support for universal background checks, reintroducing an assault rifle ban and preventing anyone convicted of a violent misdemeanor from owning a firearm.

In response to Greene, Casey criticized President Donald Trump's budget proposal, which will cut a $400 million block grant program that can be used for mental health programs and school climate improvements.

"I don't know if that's going to affect you directly," Casey said. "But I don't know why the hell we're cutting – or eliminating – that program." 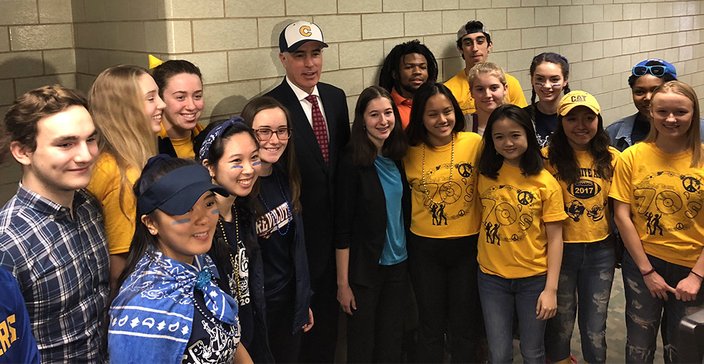 Sen. Bob Casey poses for photographs with members of Cheltenham High School's student council. Casey addressed students at the high school on Friday for a town hall, encouraging them to remain active in the nation's gun control debate.

Eve Glazier, the civics and communications director for Cheltenham's student council, implored her fellow students to raise their voices as she helped introduce Casey.

Glazier is helping to plan a student walkout calling for greater gun control.

"These events have become woven into the fabric of American society and we have become numb," Glazier said. "Understandably so, because it seems like after every one of these mass shootings we have the same reactions. Everybody tunes in, lends their thoughts and prayers, and then the news cycle moves on. And with it, goes the public interest."

"The aftermath of Parkland could be different," she continued. "But we'll have to put in the work to make it so. We, as teenagers, will carry this movement. We're not too young. We're not too ignorant. We're not too naive to be aware of and to fight for the issues we care about."

Casey echoed that sentiment as he addressed the students, urging them to recognize their voices are powerful.

Several students asked pointed questions, inquiring whether Casey had ever accepted donations from the National Rifle Association and asking whether he would revert to his old views on gun control.

Casey said he had accepted donations from the NRA while running for a state office years ago, but that his new positions on gun control now place him in danger of being attacked by the gun lobby.

Prior to the Sandy Hook shooting, Casey cast himself as a gun rights advocate. But seeing 20 elementary school children gunned down caused him to rethink his position.

And he said he's not changing it.

"I can be certain when I say that I'm not going to go back to that other position," Casey said. "And I will prove it to you." 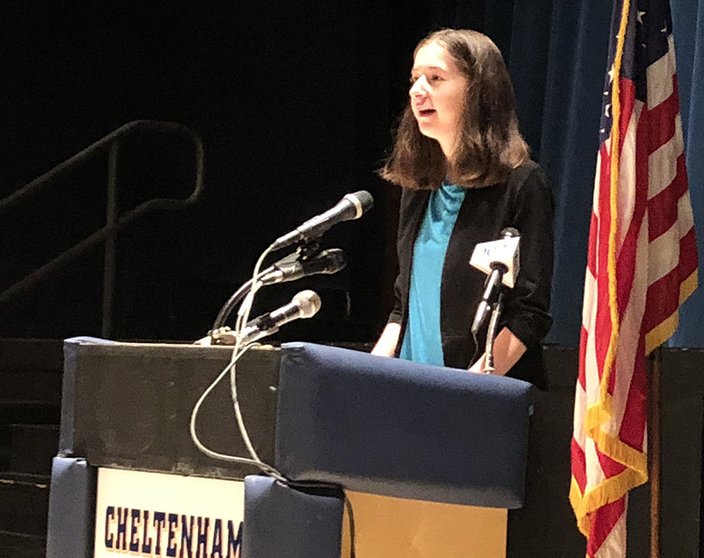 Cheltenham High School senior Eve Glazier encouraged her classmates on Friday to help shape the nation's debate on gun laws. “These events have become woven into the fabric of American society and we have become numb,” she said.

While Casey encouraged the students to maintain their activism, he also advised them to have patience. He said it will take time to pass stronger gun laws.

"I think most people across the country understand that this is a problem that has developed over a long period of time," Casey said. "We've allowed it to get worse and worse and worse by the year. And we've done very little about it."

"It's going to take a while to dig out of that hole we put ourselves in," the senator added. "But just like with any great leader or any great movement in our country, you have to start. And we have not started, I believe, until the last two weeks."

Thanks to the activism sparked by the students at Majory Stoneman Douglas High School, where 17 people died, Casey said he senses the ground is shifting.

But he doesn't know by how much.

"I have no illusions that that shift is going to mean we're going to pass five new laws in the next couple of weeks," Casey told the students. "That would be naive for any of us to think. But the ground has shifted and the federal government has to start listening to the voice of your generation. Because you're leading on this."

Like her peers who spoke during the forum, Ampofo would like to see stronger gun control laws, including a ban on assault rifles.

"He was basically saying that, while he has some control, it's really us now that has control," Ampofo said after the forum. "If you hear our voices, you're going to eventually say, 'Hey, I didn't see this before, but maybe I should rethink what I'm seeing.'"

This story was updated to correct a quote from Celeste Greene.