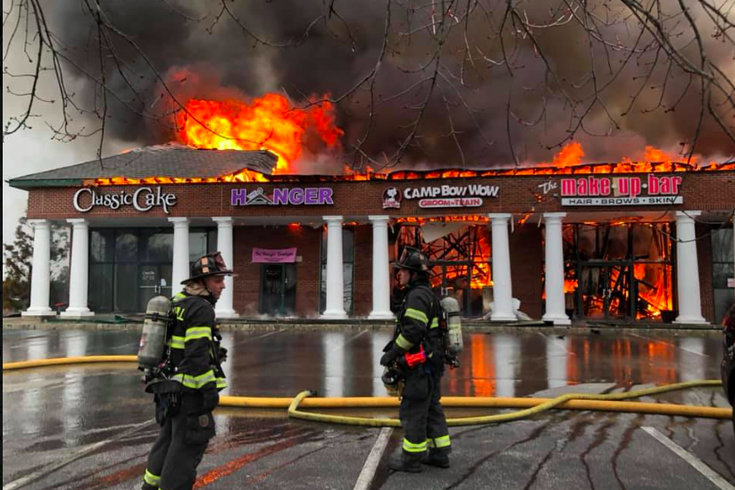 A fire broke out on March 6, 2020 at a Cherry Hill shopping center located at 484 Evesham Road. Several businesses were destroyed by the flames, firefighters said.

Firefighters in Cherry Hill battled a fierce blaze on Friday morning that destroyed several businesses at a shopping plaza.

The fire broke out just before 11:00 a.m. at the shopping center on the 400 block of East Evesham Road.

By noon, the flames were brought under control and all of the occupants of the businesses were confirmed safe, firefighters said.

None of the stores were open at the time of the fire except Starbucks, which appears to have sustained the least amount of damage.

The other businesses include a Vietnamese restaurant, a beauty salon, a dry cleaner, a cake shop and a dog groomer. There were no animals inside the building at the time of the fire.

At the time the fire broke out, there was no power at any of the businesses due to electrical work underway in the immediate area, officials told 6ABC.

Firefighters have not yet been able to enter any of the plaza's properties, which have been deemed structurally unsound.

An investigation of the fire is underway with the Cherry Hill Fire Marshall's Office.