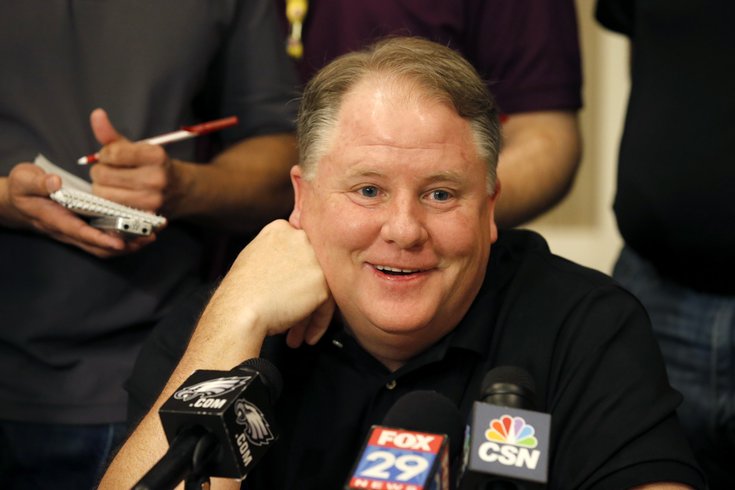 Chip Kelly smiles as he listens to a question as NFC coaches meet with the media during the NFL's annual meeting Wednesday in Phoenix.

In 2011, the San Francisco 49ers went 13-3 during the regular season, earned a two seed and thus a first-round bye, and eventually lost in the NFC Championship game in heartbreaking fashion in overtime to the Giants. That was Jim Harbaugh's first season as an NFL head coach, after leaving Stanford University.

The following offseason, the 49ers drafted 30th overall. In the 2012 draft, Andrew Luck, who Harbaugh coached at Stanford, was the clear-cut #1 overall pick, and perhaps the most highly regarded prospect since Peyton Manning.

Chip Kelly pointed out during his hour-long press conference at the NFL owners' meetings on Wednesday that bored sports reporters or radio hosts never speculated that Harbaugh would trade up to draft Luck.

"It's what makes sports great," said Kelly. "You've got nothing to talk about on sports radio, so let's talk about trades. Where's this guy gonna go? I want this guy, that guy, and this guy.

"You know what's unique about it though? How come nobody asked Jim Harbaugh about trading up for Andrew Luck? It's the same scenario, an identical scenario. I never heard a word about Jim trading up to get Andrew Luck."

1) The Colts, who drafted first in the 2012 draft, released Peyton Manning on March 7th, 2012, which was something everyone knew they were going to do. There was never any real doubt the Colts would draft Luck, but with Manning out of the way, any and all doubt was gone.

2) Marcus Mariota is not Andrew Luck. Luck was as pure a QB prospect as you'll find coming out of college. Mariota doesn't have Luck's arm strength, or the same experience running a more traditional offense that will allow NFL personnel evaluators to project his success to the NFL level. The cost to go up and trade for Luck would have been faaaar more expensive than it would have been to get Mariota, even if Mariota was clearly the best prospect in this draft.

4) Jim Harbaugh wasn't collecting former Stanford players like he needed them to breathe.

5) The 49ers were a very successful team who had just gotten good QB play from Alex Smith, and they had an up-and-comer on the roster in Colin Kaepernick. Conversely, the Eagles missed the playoffs the previous year, and got poor QB play from Nick Foles.

It's far from an identical scenario. It's not even a fraternal scenario.

We reported about a month ago that the Eagles appear determined to get Mariota. That has not changed.