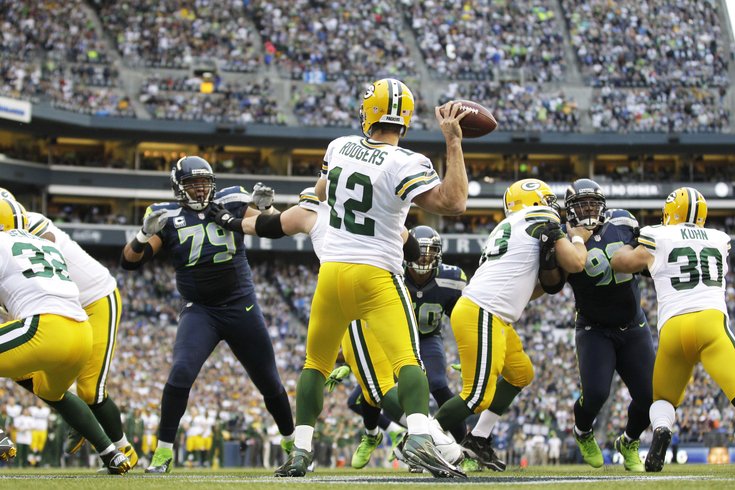 The Packers and Seahawks remain the class of the NFC.

When you look at the hierarchy of the NFC a year ago, it was somewhat of a six team race, plus whoever won the NFC South. Excluding the NFC South, there were six playoff-worthy teams, and only five spots. The point differentials in the NFC tell the story to some degree. Here's where everyone finished:

• The Seahawks and Packers were clearly the two best teams in the conference.

• The Cowboys and Eagles were fighting it out in the NFC East for the three seed.

• The Lions and Cardinals were destined for wildcard or nothing, but didn't really scare anyone.

• The Vikings, Giants, Saints, Rams, 49ers, Panthers, and Falcons were all out of playoff contention early, except for the teams in the garbage NFC South, who were playing for the right to have a much worse draft position. In fact, only six teams in the NFC had positive point differentials last season, while 10 were on the negative side of the ledger.

• And then there were the three dumpster fires in the Bears, Bucs, and Redskins.

In case you're unfamiliar with my hierarchy/obituary, it's sort of my hackneyed spin on power rankings. During the season, once a team is no longer realistic playoff contenders, we write their obituary and never speak of them again. The remaining teams are arranged hierarchy-style. We skip the AFC, because, well, I'm not going to pretend I know the AFC like I know the NFC. Let's get to the hierarchy of the NFC as they look today:

Former GM Mark Dominik ruined this team. In his term as the Bucs' GM from 2009-2013, he drafted ONE offensive lineman. One!

How is that possible? Well, the site JoeBucsFan explained why:

Dominik explained that he’s only drafted one offensive lineman among his 30 draft picks and that’s because he believes it’s typically better to see an offensive linemen on some level of the pro game before committing to them.

The prevalence of the spread offense in college has made it more challenging to effectively scout O-linemen, Dominik said, and Dominik pointed to successes with Ted Larsen, Demar Dotson and Jamon Meredith.

“Personally, I like them to develop a little bit in this game and then go get a little more information about [them,] “ Dominik said of studying young linemen prospects after the draft. “So if you can be more meticulous, have a mindset as we do as an organization, and Greg’s 100 percent on board which is fantastic for us, you go find them.”

Well, yeah. Typically it's better to see any player play in the pros before you know if they'll be good or not. But that doesn't mean you just ignore the offensive line in the draft for four years and hope you can plug those holes with declining vets and undrafted free agents.

As a result of Dominik ignoring the OL in the draft for a half decade, the Bucs don't have a single projected starter on their OL that they drafted.

The Redskins lost nine games in 2014 by at least 10 points. They lost five by at least 20. Three of those 20-point losses came to teams with six or fewer wins.

In games Robert Griffin III played the majority of the game, the Redskins went 1-6. He threw four TD passes on the season, while being picked off 6 times and fumbling 9 times.

And yet, the Redskins found it necessary for some reason to name him the starter... in February. I think I can sum up the Redskins' organizational structure like so:

In 2013, the Bears couldn't stop the RUN to save their lives:

In 2014, the Bears couldn't stop the PASS to save their lives:

Is there some other way of moving the ball in the NFL other than running it or passing it? Because if so, the Bears are probably going to be awful at stopping whatever that is in 2015.

The Vikings had seven wins last year, which is a seemingly average season for a team that wasn't likely to be very competitive in 2014. However, those seven wins came against a lot of bad teams:

In other words, the teams the Vikings beat last year averaged 4.86 wins.

Minnesota has Teddy Bridgewater's progression to look forward to, but they still have a long way to go.

One of my favorite games of the 2014 season was when the Lions and Falcons played in London. That was the game that started at 9:30 a.m. EST, which served as a little extra morning football treat for the die-hard fans. The Falcons jumped out to a 21 point halftime lead before the Lions came back and had a chance to kick a 43 yard field goal to win it, aaaaand...

Except ... The Lions didn't get the snap off in time, were advantageously called for delay of game, and got another shot from 48 after the penalty. Naturally, that time, it was good.

That sent the Falcons to 2-6. When something like that happens and you know you're probably going to eventually lose your job as a result, sometimes all you can do is pick some grass.

Anyway, the 2015 Falcons will be led by Seahawks defensive guru Dan Quinn. He'll try to fix the only defense in the league that gave up more passing yards than the Eagles.

Like the Vikings above, the Giants' wins mostly came against crappy teams:

Average number of wins among the teams the Giants beat: 5.17. See that big gap between their win against the Falcons Week 5 and the Titans Week 14? That was a seven game losing streak that culminated with a loss to the Jaguars, which I offered my analysis on at the time:

The Giants lost to the Jaguars. This is humorous to me.

In 2011, the Eagles won their last four games, which led to some false hope that they had turned things around. Andy Reid kept his job, and the Birds went 4-12 the following season.

In 2014, the Giants won three of their last four after starting the season 3-9. Are those three wins false hope? I get that Tom Coughlin won two Super Bowls, but are the Giants wasting a season in 2015 sticking with the same guys instead of getting the re-build underway sooner than later?

Patrick Willis retired. Frank Gore left in free agency. Chris Borland retired. Justin Smith might retire. Jim Harbaugh is now at Michigan. The Niners aren't going to look quite the same in 2015 as they have during their impressive (but unfulfilled) run the last half decade. And they probably won't be very good.

Cam Newton's rushing numbers go down a little every year, and his passing numbers stay roughly the same:

I love Newton's skill set, but when is he going to evolve?

The Rams are occasionally awesome. They beat the Seahawks and Broncos in 2014, and had two consecutive shutouts against the Raiders (52-0) and Redskins (24-0). I know, it's the Raiders and Redskins, but it's impressive nevertheless. If they ever get a QB, or at least a dominant run game...

The Saints forced the fewest number of turnovers in the NFC in 2015:

The NFC average for forced turnovers in 2014 was 25 per team. When you're forcing a half turnover per game less than the conference average, you're going to have a tough time winning games.

There are two ways to look at the Saints in 2015, in terms of turnovers:

• On the one hand, some turnovers are luck. A ball carrier can be holding the ball sloppily and it gets punched out, or a crappy opposing QB can throw you a gift INT.

• On the other hand, forcing turnovers is a skill. Are you getting pressure on the opposing QB, and forcing him into poor throws? Do you have big hitters? Ball hawks?

For the 2014 Saints, it was probably a mix of the two, but I would expect their forced turnover output to come up in 2015. And it better, because it looks like Drew Brees is beginning to drop off from the elite player he was.

The Cardinals went 11-5 last year despite a laundry list of injuries, and then they got pummeled in the playoffs by a 7-win team. Hats off to the Cards for winning so many games, but...

Do they really do anything all that well?

The Eagles' 2014 season went wrong for five reasons. You can click on any of the below links to delve deeper into the 2014 Eagles' woes:

Now there are two ways to look ahead to the 2015 season:

• The optimist will say that there's no way the Eagles will lead the league in turnovers, give up as many big plays as they did, have as much bad luck with OL injuries, get equally bad QB play, and continue to see a drop in big plays.

• The pessimist will say that they have way too many things to fix to be considered legitimate contenders.

A couple weeks ago, we noted that the teams that have had the most recent playoff success have done a good job running the ball in the playoffs. (Not that that is some kind of shocking revelation). While the Lions aren't a great running team offensively, they did a tremendous job stopping the run last year. Here are all the teams in the last 10 years who have allowed 3.4 yards per carry or less in a season:

Ndamukong Suh is out. Haloti Ngata is in. Will the Lions defense be as good as it was a year ago?

Give the Cowboys' coaching staff a boatload of credit for recognizing their deficiencies a year ago and masking them. Since Jason Garrett became the head coach, the Cowboys had an extremely lopsided run:pass ratio. In 2014, they changed course drastically:

And it worked for them. Behind a great run-blocking offensive line, DeMarco Murray led the NFL in rushing yards by a margin of almost 500 yards. They controlled the ball, ate clock, converted third downs (47.3%, 2nd best in the NFL), and kept their suspect defense off the field. Defensively, while not a particularly accomplished bunch, the Cowboys led the NFC with 31 forced turnovers (as noted above).

But it all started with that incredibly effective run game.

Was Murray a huge factor in the Cowboys' success, or can anyone run behind that Dallas OL? We'll see.

As long as the Packers employ the best football player on the planet, they'll be Super Bowl contenders.