Can anyone other than Chip Kelly explain his plan for Eagles?

If the guy calling the shots at NovaCare has a plan, it should be apparent by now 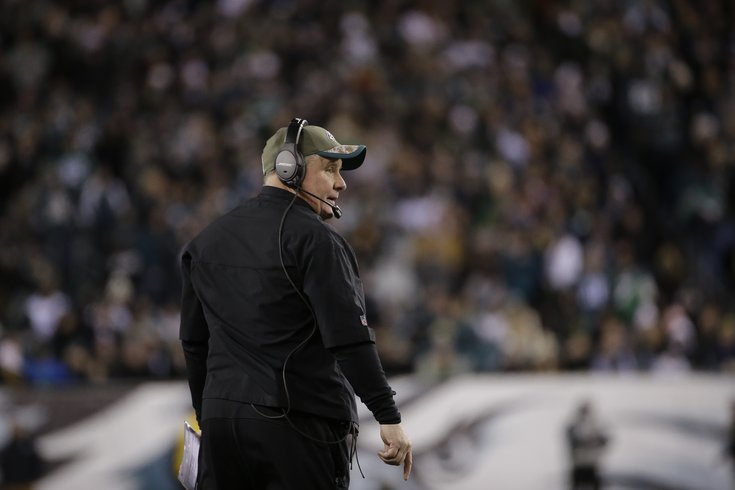 So there I was, zigging and zagging my way past Spiderman and SpongeBob SquarePants on Hollywood Boulevard last week, my Eagles cap perched proudly on my head, when a voice cut through the clamor of the freak show.

“Hey,” somebody screamed at me. “What the hell is Chip Kelly doing?”

I quickly dodged Thor before offering a weak shrug. When I left for vacation a week ago, I had no clue about the immediate future of the Eagles, and I have returned with nothing more than a light suntan. Kelly’s moves are just as puzzling from 3,000 miles away.

"Is Kelly rebuilding his offense around a quarterback with a career passer rating of 79.3 and two torn ACLs? Seriously?"

I understand the swap of LeSean McCoy for DeMarco Murray and the Nick Foles-Sam Bradford exchange is even starting to make sense, but the prevailing impression so far of Kelly’s roster upheaval is that he has no actual plan. Kelly has never seemed more like a novice than during his first days as an NFL general manager.

For example, he said he traded McCoy to preserve money for other moves, citing the signing of an elite cornerback, Byron Maxwell, as proof. Exactly one day later, he splurged for $42 million on Murray and $11.5 million on Ryan Mathews. I’m no math whiz, but the Eagles are now spending more than ever on their running backs, aren’t they?

Without question, the best part of the Murray signing is that his absence will hurt the Birds’ prime NFC East rival, the Dallas Cowboys. Now, we just have to hope Dallas hasn't already returned the favor by putting Murray on a crash course toward serious injury after giving the 27-year-old back an obnoxious 449 touches last season.

At least in Murray’s case, he is coming off a career year. If he performs for just a couple of seasons the way he did in 2014, the Eagles will be happy. There is no similar model for Bradford, who has been somewhat of a bust in those rare occasions when he hasn’t been hurt. Is Kelly rebuilding his offense around a quarterback with a career passer rating of 79.3 and two torn ACLs?

The McCoy and Foles moves were more about whom Kelly was subtracting, it seems. McCoy was dancing too much, and Foles was not dancing enough. Kelly may be saying all the right things, but he was never in love with either player. McCoy has a bad attitude, and Foles has cement shoes. Neither has been the right fit for Kelly’s offense.

Spending so much money on his quarterback and runners – over $20 million in 2015 alone – has left some major holes to fill, and neither the funds nor the players to round out the roster. For example, who is going to catch Bradford’s passes? Jordan Matthews is a star in the making, but Riley Cooper is putrid and Josh Huff is no Jeremy Maclin.

Even more worrisome is the strong-safety position. Granted, Nate Allen, who signed in Oakland last week, was terrible last season, but Earl Wolff, Chris Prosinski and Jerome Couplin III project to be even worse. Adding a rookie or two through the draft is inevitable, but having so little experience at such a crucial spot is curious, if not downright reckless.

So far, the conventional wisdom is that Kelly has more rabbits – or Oregon Ducks, to be more precise – up his sleeve, but how can we be so sure his knack for invention as a coach translates to the GM position? If there were a genuine plan behind his moves, shouldn't it be apparent by now?

Hey, if anyone has figured out what Chip Kelly is doing, could you please share it with me? I promised all of the freaks on Hollywood Boulevard that I’d get back to them as soon as I had an answer.

Daniel Snyder is one of the worst people in sports, an obnoxious bully whose millions cannot mask his spectacular failure as owner of the Washington Redskins. He is a champion of nothing, and that includes freedom of speech.

Last week, in his latest attempt to suppress criticism, he fired journalist Jason Reid before the former Washington Post sportswriter had started his first shift at WTEM, a sports-radio station in the nation’s capital. Reid has one serious shortcoming. He tells the truth. There is no room for the truth in Snyder’s sad little world.

So when Reid was hired for a new show called The Man Cave, he assumed it was OK with the station owner, who is none other than Snyder himself. (This is classic Snyder behavior. Silence the critics by buying the sports station.) It was not OK. When Snyder found out about Reid’s new position, he dumped both the writer and the program director.

This latest example of Snyder’s boorishness calls to mind a time 20 years ago when a man with a very similar name owned the sports-radio station here in Philadelphia. It was longtime Flyers chairman Ed Snider, and I was the blowhard morning guy on WIP.

During some very lean years for the hockey franchise in the 1990s, I hammered Snider and his team — relentlessly, ruthlessly. And I can say with amazement and appreciation is that he never interfered with me, or any of the other hosts, on WIP. Not once.

Now don’t get me wrong. Snider hated the station, though he probably didn’t mind that it was one of the most profitable in the genre back then. In fact, he often said that he never listened to it, and that it was not at all what he conceived when he jumped into the sports-radio game near the format’s inception.

In the end, Snider actually traded WIP to CBS Radio – our current owner – for Eric Lindros. Now, it wasn’t reported that way, of course. But the Flyers had to kick in $15 million when they acquired the young star, and that was the exact selling price he got the same year for our station.

The moral of this story is simple. Daniel Snyder has no respect for fans. Ed Snider does.

I just thought you should know that.

In his days as a goon, Craig Berube never had much involvement with goaltenders. He rarely shot the puck – not his job – and a skater dropping his gloves to slug it out with a goalie almost never happens. There is a code of honor to follow, even among enforcers.

Unfortunately for the Flyers coach, this lack of experience with the most important position on the ice has him facing potential dismissal at the end of the season. Any chance of Berube saving his job ended last week with yet another embarrassing blunder involving goalie Steve Mason.

Just weeks after Berube had risked the health of his best performer by rushing him into a game against the wishes of goalie coach Jeff Reese – a dispute that led to Reese’s hasty firing – Berube struck again. This time, the coach pulled Mason with two minutes left in the second period after a screened shot gave Calgary a 2-0 lead.

Mason never saw the goal because teammate Nick Schultz blocked his view, but Berube clumsily yanked Mason from the game anyway, rather than wait for the final seconds of the period to expire. Later, the coach said it’s the goalie’s responsibility to find the puck.

At a time when the team is hopelessly out of the playoff race, the notion of singling out Mason, in his breakout season, is just plain stupid. Admitting the next day that he would make the same move again – as the coach boldly stated – is even worse. Berube may not be a good NHL coach, but he is a decisive one.

After the Calgary loss, the Flyers held a meeting behind closed doors to discuss the situation. They excluded one notable person from that session: Craig Berube.

There is no question now that the coach’s handling of Steve Mason has cost him his team – and soon it will cost him his job.

• The greatest Eagle of them all, Chuck Bednarik, passed away over the weekend. There has never been, and will never be, a tougher athlete than Concrete Charlie, who smothered Green Bay great Jim Taylor as the final seconds ticked off on the last Eagles championship, 55 years ago. Condolences are in order for those who got to see him play, and even more so for those who didn’t.

• Joe Banner is enjoying life after football, or so the story goes. Don’t believe it. During his 16 years with the Eagles, he was one of the most obsessive, egocentric sports executives in Philadelphia history. And after his failure in Cleveland, he prefers being a beach bum in Miami? No way. He’ll be back in the NFL within a year. Bet on it.

• The hubbub over the Cowboys’ signing of defensive end Greg Hardy is weird. By all accounts, Hardy is a creep — accused of domestic abuse and gun charges. The problem is, many NFL players are outlaws. Does the name Ray Lewis ring a bell? The NFL has more than its share of rotten people. Drawing the line at Greg Hardy is ridiculous.

• Mo’ne Davis, 13, has a new book out about her philosophy of life, has a new sneaker (designed by her) available soon and has a movie of her “journey” already in production. Just one question: How much sillier would the overkill be if her Taney Dragons had actually won the Little League World Series, instead of finishing fourth?

• Allen Iverson would like to join Sam Hinkie in the front office of the Sixers. He said so last week, and he wasn’t joking. Can you imagine the most exciting Sixers player of all time crunching numbers with the master of analytics? Can you picture Allen in the war room on draft night whispering some sage advice to the GM? ... Me neither.