What they're saying in Dallas: Cowboys, fans trying to move on from DeMarco Murray 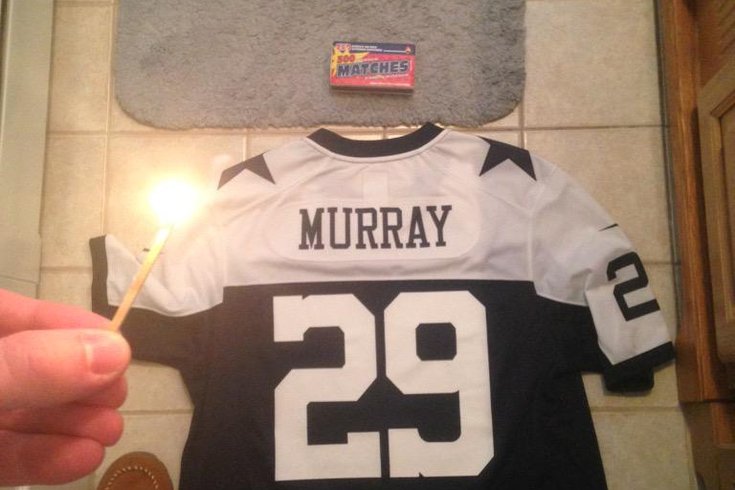 A Cowboys fan prepares to burn his DeMarco Murray Jersey

While it may be hard to feel anything close to sympathy for Dallas Cowboys fans, they are obviously in pain over the loss of DeMarco Murray.

Not only was the running back the most productive in the NFL last season, but he signed with a rival, the Philadelphia Eagles. Imagine for a second, Eagles fans, that LeSean McCoy was not traded by the Eagles, but rather left as a free agent and signed in Dallas because the Eagles didn't offer him enough money. That would hurt, right?

For now, you don't have to worry about it. You're on the winning side here. So enjoy it while it lasts.

That's some loyalty right there.

Dallas Cowboys have themselves to blame for loss of DeMarco Murray

via Jarrett Bell of USA Today

He weakened his toughest competition in the NFC East in the process.

It's a double victory for the Philadelphia Eagles and the Dallas Cowboys only have themselves to blame.

DeMarco Murray managed to get the type of deal from the Eagles — reportedly $42 million over five years, with $21 million guaranteed — that his old employer could not quite stomach.

Now the Cowboys will pay in another way. [usatoday.com]

Now here's a look at some of the headlines out of Dallas, starting with a response to the Vines you see above:

Give Murray a butt-slap and move on

via Adam Boedeker of NBCDFW.com

DeMarco Murray said all the right things in his press conference to introduce him to the Philly media on Thursday after he'd signed a new deal with the NFC East rival Eagles, and soon after, Murray jerseys were being burned by stupid Cowboys fans.

As we've said several times here recently, Murray had one shot at a big contract, and he got it. It just so happened it was from the team that the Cowboys might hate the most and is definitely their biggest NFC East rival.

Did he chase the biggest money? Nope. That came from the Oakland Raiders, according to several reports. But Murray wanted to play for a winning franchise, and after Dallas declined to give him what he wanted, the Eagles stepped up to the plate and did. [NBCDFW.com]

Wow, that's a rather level-headed take on this whole thing.

Don't worry though, he goes on to criticize the Eagles for giving way too much money -- which they may or may not have -- and more or less says the Cowboys will be better for letting their running back walk. Enjoy Darren McFadden, guys.

For the most part, they're not buying on the fact that the team can replace Murray, even after they signed McFadden on Friday morning.

McFadden won't do much for Dallas

Monson graded the McFadden signing for the Cowboys, and almost gave it a failing grade. It passed, but barely, earning a D-plus:

McFadden is one of those players who will forever draw interest from NFL teams because he looks like he should be an effective NFL player. Here's the problem: He isn't.

He has the size and speed to be a weapon but not the instincts or vision to make it work. His career average is 4.1 rushing yards per carry, but he hasn't topped 3.5 in any of the past three seasons. His speed does help him produce the occasional big play. In his three best seasons, he had touchdown carries of 57, 64 and 70 yards, but it's the carries between those big plays that are his issue.

If the Cowboys expect McFadden to be anything more than a backup, they've been watching too much Arkansas tape, because that's just not who he is in the NFL.  [ESPN.com]

So if McFadden isn't the answer, and Adrian Peterson won't be headed there, how will Jerry Jones replace Murray? Here's one idea:

via David Moore of the Dallas Morning News

On what the plan is for the Cowboys after not re-signing Murray:

The second part of it is if you’re going to institute financial discipline in a way you haven’t before, you better show that your plan moving forward is going to be every bit as effective. So now the emphasis shifts to, ‘OK, what do you do? So I think this is how you proceed is the money that was carved out or set aside to spend on DeMarco Murray this offseason will now be used to upgrade their defense through free agency. I think they’re going to spend more money defensively on that side of the ball than what they would have otherwise. Two, I think you’re going to see them take a running back in either the first or second round of the draft coming up. I was told today again — and had been told this before — that if DeMarco did leave, that they had identified the draft in the best way to fill that void going forward. Now you still have questions whether you’re going to have a lead back, whether you do it by committee, but they’re going to add a quality guy there.  [DallasNews.com]

Correction: They're going to try to add a quality guy there.

There were several writers who praised the Cowboys for sticking to their suddenly fiscally responsible plan, which includes using the draft to replace Murray.

Murray gone and Peterson not coming, but fiscally responsible Cowboys have a plan

via Brandon George of the Dallas Morning News

Once the Jones family quit gagging about Murray jumping ship to join their NFC East rival, the Cowboys quickly moved on to Plan B.

The Cowboys’ plan to replace Murray will mirror the reason he left. They have no intentions of paying a veteran big bucks.

The Cowboys have kicked the tires on some of the remaining veteran running backs on the market, such as C.J. Spiller, but they won’t add one unless he’s willing to come in at their price. These new fiscally responsible Cowboys aren’t budging.

Instead, the Cowboys will turn to the NFL draft in late April to replace Murray, sources said. [DallasToday.com]

Cowboys' financial discipline was one obstacle Murray couldn't get past

via David Moore of the Dallas Morning News

The loss speaks to a philosophical shift in the Cowboys' front office. It recognizes the value inherent in one of the best young offensive lines in the league and acknowledges the statistical reality of what happens to backs in this league after a season of heavy use.

A desire to impose financial discipline, a quality owner Jerry Jones has been criticized for ignoring in the past, drove the reluctant decision to let Murray leave for a division rival.

“Obviously there is emotion involved in these decisions, but it is critical that there must be discipline involved as well,’’ Jones said in a statement.  “If it were a question of having an open checkbook with no salary cap constraints, we all know things would have worked out differently. [DallasToday.com]

So what does this sudden change in philosophy say about the Cowboys? Perhaps Jerry Jones is losing some of his power...

A changing of the guard in Dallas?

via Clarence E. Hill Jr. of the Fort Worth Star-Telegram

Hill writes that in previous years, Jerry Jones would have locked up Murray, along with Dez Bryant. The fact that he didn't means that the power is shifting in Jerry World:

But what it means for the Cowboys more than ever is that this is Stephen Jones’ team.

Jerry Jones still carries the title of owner/general manager. He remains the face of the franchise. But it’s his son, Stephen, the vice president of player personnel, who is making the final decisions.

This changing of the guard became increasingly evident last season when it was Stephen who attended every practice instead of the elder Jones, which was a change.

Just think about it. If Jerry Jones were in charge, Dez Bryant and DeMarco Murray would have been locked up with big deals long ago. Heck, Johnny Manziel would have been the team’s top pick a year ago. [star-telegram.com]

Hill wasn't alone in that theory, as Jean-Jacques Taylor of ESPNDallas.com wrote something similar:

The illusion that Jerry Jones is running these Dallas Cowboys is over. Oh, Jerry remains the face of the franchise, but it's Stephen Jones who's in charge these days.

That's why DeMarco Murray no longer wears a blue star on the side of his helmet.

In the old days, Jerry would've given Murray a blank check during the season and he'd be in the south of France sipping on a mimosa this time of year. Instead, Murray spent Thursday negotiating with the Philadelphia Eagles before joining the Cowboys' NFC East rival. [ESPNDallas.com]

If nothing else, that should be consolation to the angry mobs in Dallas. Meanwhile, Eagles fans are praying that Jerry stays in charge as long as possible.

In Murray’s career-best 2014 season, he averaged at least 4 yards per carry in all but three games. Two of those three games were against the Eagles. Murray averaged 4.7 yards per rush across all of his games.

The last time the NFL’s leading rusher started the next season on a different team was in 1947. After leading the league with 604 rush yards (and winning the MVP award) for Pittsburgh in 1946, Bill Dudley was traded and played the next season for Detroit. [ESPN.com]

So one last time, enjoy this: