Are the Eagles better or worse? A position-by-position look 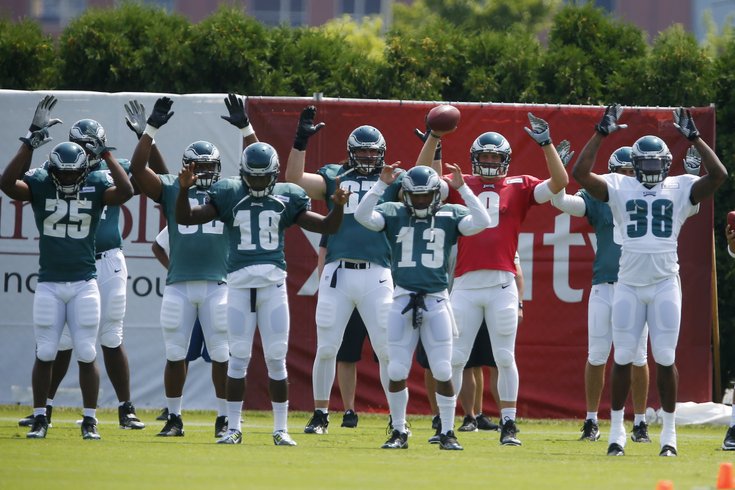 "Put your hands up if you're still under contract with the Eagles. Not so fast, everyone except Dennis Kelly."

Over the last two weeks, the Eagles may have been the busiest team in the NFL, as Chip Kelly has turned the roster over to an extreme degree in his first offseason with full control over personnel decisions.

The Eagles likely aren't done, and we'll probably see them make some minor moves between now and the draft. But now that the initial free agency frenzy is over, let's take a look if the Eagles are better now than they were a a few weeks ago at each position.

The Eagles wasted no time making headlines minutes after the official new league lyear began at 4pm on March 10th, when they traded Nick Foles to the Rams for Sam Bradford. Here's a snapshot of the deal:

#JudgeJimmy says: The Eagles traded their extremely cheap starting QB and a 2nd round pick for a QB coming off a pair of torn ACLs with limited success when he was healthy, who will cost about $13 million against the cap in 2015. Is Bradford better than Nick Foles? Maybe. But considering the difference in cap hits between the two players, the deal in its entirety makes the team as a whole worse.

...unless this move was a precursor to something else. Until then... Potentially better at QB itself, worse overall.

#JudgeJimmy says: It's difficult to imagine trading an elite runner like LeSean McCoy, and somehow ending up better at running back, but that's what the Eagles did. Better.

Every year, there's some idiot team that wildly overpays for a wide receiver. This year that was the Chiefs, who handed Jeremy Maclin an asinine 5 year, $55 million deal.

#JudgeJimmy says: The Eagles were right not to overextend themselves with Maclin, but the fallout is that the Eagles are left with Riley Cooper, Jordan Matthews, and Josh Huff at receiver. Maclin is certainly not an elite receiver, but he is a very good one and the Eagles currently don't have a replacement for him. Clearly worse.

The Eagles' first noteworthy move of the offseason was to release TE James Casey.

#JudgeJimmy says: Casey was mostly a special teams contributor, but he had his occasional moments in the regular offense. Worse, I guess, but we're not talking about a huge loss here.

The Eagles released long time Eagle Todd Herremans, and are rumored to have Evan Mathis on the trading block. They also targeted former Broncos OG Orlando Franklin, but lost out to the Chargers for his services.

#JudgeJimmy says: The offensive line was already a big need before they released Herremans, and that will only accelerate if they trade Mathis. Worse.

This is the only position on the team where there was no action, unless you count restricted free agent Cedric Thornton being tendered at the 2nd round level.

The Eagles released long time Eagle Trent Cole, but they were able to agree to a long term deal with Brandon Graham.

#JudgeJimmy says: There was no way the Eagles were bringing Trent Cole back at his cap number, so they did the right thing by letting him go, but the Eagles are now thin at OLB. Worse, but Cole was a declining player.

#JudgeJimmy says: The Eagles are now stacked at ILB. They have a Alonso, Mychal Kendricks, DeMeco Ryans, and Jones under contract. The Eagles will have a decision to make on Kendricks and Ryans. Do they bring back Ryans in 2015? If not they'll save $6.9 million off their cap. If so, I would imagine the Eagles will look to re-do Ryans' deal, and then trade Kendricks. Whatever way they go, they have talent and flexibility here. Better.

Byron Maxwell was clearly a primary target of the Eagles, and they pounced on him quickly when the "legal tampering" period of free agency began. They also signed former Oregon Duck Walter Thurmond to compete with Brandon Boykin and Nolan Carroll on the outside, or so Chip Kelly says.

The Eagles targeted Devin McCourty in free agency, but came up empty, and then seemingly sat on the sidelines for the rest of the free agent safety options. They also lost free agent Nate Allen to the Raiders.

#JudgeJimmy says: Oof. The lack of a free agent safety to this point hurts, but the market for safeties is completely out of control. For example, Allen signed an absurd 4 year, $23 million deal. Meanwhile, Ron Parker has three career INTs and he signed a 5 year, $25 million deal. That just goes to show how desperate teams are for safeties, as it is perhaps the worst performing position in the NFL. It seems unimaginable that the Eagles could get worse at safety, but when you consider that they didn't add anyone, and the market has shaped up the way it has, the Eagles may actually be worse off than they were before. Worse.

Total tally (although to be fair, they're probably not done)